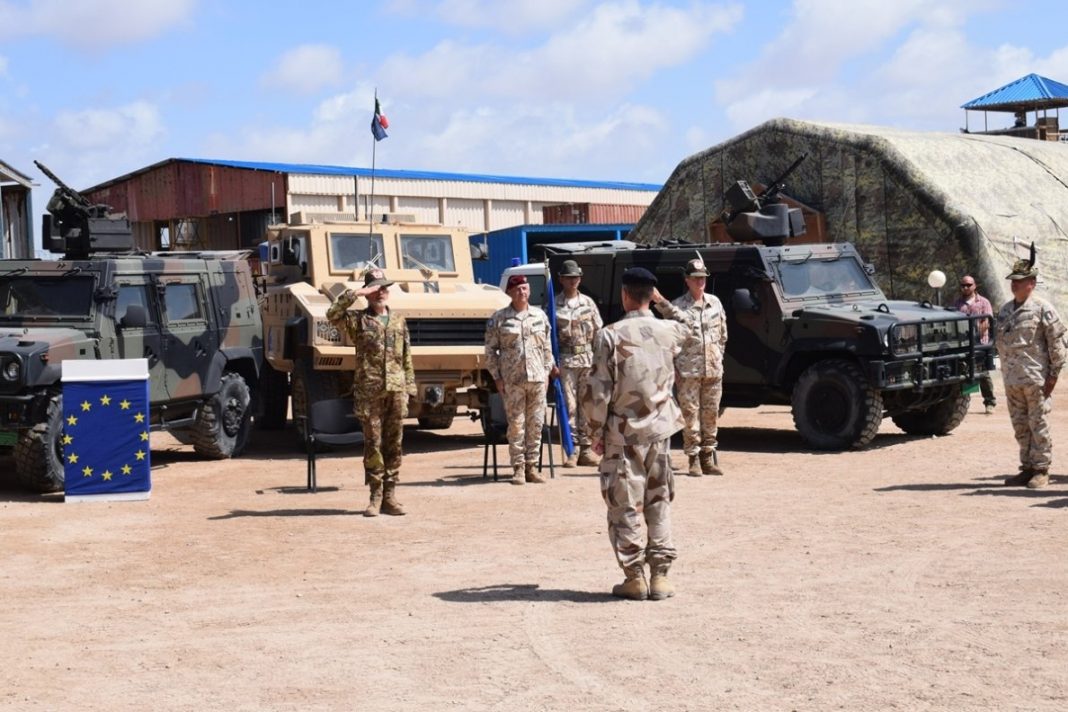 An army convoy, escorted by elements of the Somalia army, was hit, Monday, by an explosives-laden vehicle in Mogadishu.

The Italians – flying Italian and EU flags being part of the European Union presence in Somalia, it was reported, were hit at a place not far from the Ministry of Defense in the Dayniile area of the terror-besieged city.

No casualties were immediately released of the incident but eyewitnesses state that at least one of the Army-issue Italian vehicles was heavily damaged and was towed away.

The Somalia National Army (SNA), later, said that none o the Italians were injured or killed but that the blast killed two civilians who were in the area, a statement that needed to be taken with a heavy dose of salts. That civilians who were passing by were killed and none of the personnel in the direct hit vehicle did not even report minor injuries was, observers, the tallest as doctored stories usually come.

Nobody knows for certain the exact number of foreign troops other than AMISOM supporting the Western-backed Mogadishu government ion security matters but, as reports go, the Italians operating from the Halane area were officially put at 220 officers and NCOs on army training assignments.

The Al Qaeda-linked Islamist fighters were driven out of Mogadishu in 2011 but, since then, have changed operational offensives to other modes more in line with guerilla warfare tactics.

The Group captured a town only 30 kilometers outside Baidoa, the capital of the Federal Southwest State of Somalia, itself about 250 kms southwest of Mogadishu.

The Group has, of late, picked up its hit-and-run operations in the Middle and Lower Shabelle sub-regions, flanking the capital to the north and southwest, as well as in Mogadishu itself.

What has not been explained in the merry-go-round clashes between the government’s SNA and Al Shabaab is why the army keeps moving out of posts, villages, and towns under their control which are immediately taken over by Shabaab as if on signal, only for the army to return a day or a week later to take it back – most times without much casualties.

“This is an unspoken strategy which, however, al players adhere to aiming to keep the threat of Al Shabaab alive in order to keep international funds pouring in,” a political observer told Somtribune.