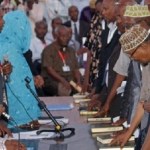 You have probably heard about kangaroo courts but have you heard of kangaroo parliament? If not, look at Somalia’s parliament and you will see what is in a kangaroo parliament. I chose “kangaroo parliament” for the title of this article because Somalia’s Parliament doesn’t fit a code of ethics and the conduct of a parliament, but it fits the perfect description of kangaroo parliament. On one hand, here I would like to congratulate the President Mr. Hassan Mohamud Uluso for achieving the championship title of Somalia being the #1 most corrupted country on the face of the earth two years in row. Mr. President, you have worked so hard to attain this title and you’re so focused on competing again to defend your world championship title. We surely could not have done it without you. I am quite sure under your leadership Somalia will be the undisputed champion of that title for years to come; so for that, I thank you Mr. President.

On the other hand, here I would like to express my deep disappointment and sorrow at the downward turn the country has clearly taken. It was my hope that someday in the future a cure would be found for Somalia which has been devastated by an ongoing civil war, corruption, sycophancy, tribalism, absolutism favouritism, cronyism, nepotism, totalitarianism, authoritarianism, tyranny, and all forms of bad governance. Now more than ever, my hope has been dashed to the ground by seeing Somalia’s vicious cycle of political crises and members of the parliament being instrumental in the destruction of the country. It is quite sad and unfortunate to see that the parliament of the country has become the most corrupted institution in the country by far. On the contrary, the parliament is supposed to be the most supreme institution, which should take a closer look at maintaining anti-corruption processes. It should be a co-ordinator in the process of cleaning up and abiding in transparent processes in society and political decisions. The parliament is the highest legislature, highest political and the most powerful institution which is supposed to be the center of any form of democracy, and integrity watch. According to the Corruption Perception Index released report on December 4th 2014, by Transparency International–the Global Coalition against Corruption, Somalia is the most corrupted country on the face of the earth. Somalia ranked # 1 out of 175 countries in corruption, startling facts about Africa from the 2014 Corruption Index.

The index report is talking about the reality on the ground and reflecting on the actions of the members of the parliament. The parliament featured a litany of shameful events that includes the presidential election of 2012 when Damuljadid–breakaway faction of Al Islah Islamist group bribed members of the parliament by giving cash in exchange for their votes. Professor Ahmed Ismail Samanter said, “I saw it with my own eyes, members of parliament taking bribes to vote for Mr. Hassan Mohamud Uluso during the election of 2012”. So, President Uluso came to power through bribery and corruption, and ever since, Mr. Uluso believes in corruption more than his religion. Corruption has become a way of his life, his best tool and weapon to get whatever he wants, and members of the parliament have become his instruments to just serve whatever he wants as well as whatever he instructs them to do. It really is breathtaking how corruption has become so endemic in the parliament that most of members of parliament have just simply accepted it as “normal”. Shocking examples of the corrupted parliamentarians are featured in the above pictures.

A year ago, President Uluso succeeded in sacking Prime Minister–Abdi Farah Shirdon without an apparent reason. Sadly, Mr. Shirdon was used as scapegoat and blamed for scandals that have mired president Uluso’s family and his associates after Ms.Yusur Abrar–Governor of the Central Bank of Somalia, resigned and refused to approve the opening of an account in Dubai for diverting public money to the private hands of the president and to his crony businessmen; there have been reports of U.N. Monitoring Group on Somalia for embezzling public funds in cahoots with other government officials and associates of President Uluso, and the revelation that President Uluso used the lifting of the arms embargo as an opportunity to arm his sub-clan. President Uluso asked the prime minister to resign but Mr. Shirdon resisted resigning. However, President Uluso began to use his sword (corruption being his favourite weapon) by bribing members of the parliament and demanding them to votea no confidence motion. The motion passed and parliament voted to sack Shirdon and he was refused to speak. Shirdon told reporters ‘minutes before the vote took place, “that it’s unacceptable, even the accused has the right to defend himself”.

Having said all that, there are few decent men and women in the parliament who are always critical to illegal motions and the corruption. They have a strong sense of integrity for transparency and better governance. They have demonstrated a high standard of an ethical code and parliamentary conduct. Even though they are fierce fighters, unfortunately they do not win because those who are morally bankrupt outnumber them. In other words, those who lack moral and ethical principles always win.

The removal of Farah Sheikh Abdulkadir Mohamed from Minister of Justice and Constitutional Affairs to the Ministry of Livestock and Animal Husbandry is the root cause of conflict between President Uluso and Prime Minister Abdiwali. Mr. Farah governs Somalia by proxy and he is a man on a mission to rig the upcoming election for Damuljadid to rule the country for another four years. He was the mastermind of Damuljadid winning the election of 2012. Farah intends to appoint an election committee that will work in their favour. His plan is to rid of the current judicial system by replacing the Damuljadid judicial system. Farah has a goal to consolidate by controlling all three branches of the government: the executive, the legislative and the judicial branches. He has already been controlling the executive and legislative branches.

Although parliament and parliamentarians do many and quite different things, there is a reasonable consensus in the literature that these aspects can be captured conceptually within four roles, which are as follows: a) legislative, which includes establishing rules for the ordering of social, political and economic activity and empowering the government to enforce these rules; b) financial control, which includes empowering the executive to collect tax and other revenues, to spend those revenues for specific purposes and to record and report on actual expenditures and achievements; c) oversight includes those parliamentary activities help make the actions of government transparent to the electorate and holding the executive publicly accountable; and d) representation includes the less concrete functions of ensuring that citizens’ concerns with government are addressed, that links parliamentarians with citizens and the civic sector in articulating the public purpose, and that helps in legitimizing the activities of government by ensuring that the people’s voices are formally heard in the deliberations of parliament to mandate and fund them.