SomTribune
Home Opinion/Analysis SOMALILAND: Hargeisa Water Supply Will No Longer Be a Conundrum 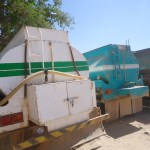 It was a sunny day at around 13 hours Hargeisa local time. The temperature was far beyond bearable as a result of scorching sun in the mid of a clear day. During these hours pet animals even seek shelter to escape from the heat of the sun, let alone a human soul. I was at the wheel on my way home when I incidentally set my eyes on a mother holding bunches of both empty and filled or half-filed five liter-sized plastic Jerry cans in her hands. My brain instantly helped me address about the mother’s job to be a milk seller__ not at a single static kiosk but just moving on foot across the width of her neighborhoods and by using her modest voice to bring her potential buyers’ attention towards her presence with a fresh milk. My brain waves further immobilized all my feelings towards assessing curiously the kind of message her physical status sending not only to me but to every human__ capable of thinking about others’ lives. Absolutely exhausted; but under her personal or familial circumstances, still robust and moving. Within fractions of a second, the mother called a man standing at a door-step of a shop roughly 50 meters away from her and requested him drive his water-tanker-mounted-vehicle to her house and fetch a drinking water.

A bigger feeling suddenly struck in me again__ just asking myself how this woman was suffering from the reality in which her right to access clean water was long in between big questions marks. Tough times never last but tough people do (Robert H. Schuller).Owing to my personal evaluation; the mother was seemingly tough, wise and responsible as she has presumably taken the hot seat to be the bread winner for her family in the absence of her husband, either by death or otherwise or under the shadow of addiction-driven-irresponsibility behavior that molds differently the lives of many Somali families in and around the world. Yet, a bitter feeling embittered me a lot knowing the cost of such water is quite burden on her and everyone in her peers. It enormously affected me beyond words as such cost of one barrel of water (roughly 2.00 USD) is not onetime cost but recurring for her family 24/7 and 365 days of the year. In other words, such cost is great burden vis-à-vis the meagre income she generates from the sale of milk daily.

Hargeisa is a city with unique qualities; the city rests in a beautiful mountainous landscape; residentially expanded and abundantly populated as well. It’s a city on a course of embracing its multicultural demographics by just transforming from exclusive homogeneous inhabitants to cosmopolitan. Unlike many other cities in Somaliland, it’s simple to see many expatriate communities who are running with their lives freely in Hargeisa today. The city’s water infrastructure, which is deeply dilapidated, was built by the Chinese in the early 1970s, just to serve the inhabitants of that time roughly 200,000 people only. The water system of the city had suffered the damages so reached by the wars resulted the dethronement of the authoritarian regime of Siad Barre.

Hargeisa water scarcity had never been attributed to low volume levels what so ever, but apparent negligence and mismanagement in great deals. No tangible expansion was made with the city’s major water infrastructure by the former Somaliland administrations either; whilst huge sums in the form of donations from the international donors are said to have had mysteriously been disappeared into the hands of the corruption ridden individuals/institutions.

According to 2008 EU-funded study on Hargeisa Urban Water Supply Upgrading Project (HUWSUP), by UN-Habitat and in the partnership with the Hargeisa Water Agency and the then Somaliland Ministry of Mining, Energy and Water Resources (now separated into two full-fledged ministries). The European Union has generously granted 15 million EUR from the European Development Fund to help alleviate the city’s long problems on clean and portable water. This huge capital underlying project was said to have been subjected to a timeframe of roughly 40 long months of construction and capacity building and would hopefully be ready to deliver by mid or late 2016.

HUWSUP will build a new pipeline network, and revamp and improve pumping capabilities. In addition, HUWSUP will rehabilitate old water boreholes, and drill new water boreholes so as to further develop Hargeisa’s current water system, and expand the water sustainability.

Water shortage is not common for the city’s neighborhoods as mostly the northern and some parts in the middle neighborhoods enjoy the blessings of the old water-lines, whereas, mostly the southern, eastern and parts in the western of the city do not sooth their thirst with a single drop came in through the ordinary water-taps!! Unlike the former Somaliland administrations since its birth, the incumbent administration has taken a different policy with regard to the in betterment of the city-water-supply by simply taking advantages of similar donations given by the UAE patronages. UAE funded project on water explorations and drilling new wells in 2008-09 was behind the boreholes in the Humbo-wayne area in Hargeisa outskirts. These new water discoveries would come through the most viable road map to mainly two big under construction reservoirs with the latest know-how and is aimed at serving water for parts of the middle, eastern, southern and southwestern neighborhoods of the city. Both the EU & UAE funded projects were in progress to meet their objectives amid tentative hindrances by interest-oriented challenges and sabotages of both individuals and tribal disguises.

Hargeisa principal water-supply-system “a quite long conundrum” seems to be eventually answered by action not by words any more. People of the city are eagerly waiting to equally enjoy one day with the most precious natural resource in their homeland (the water). The mother with the milk in the streets would hopefully divert much of her daily expenses on water to the saving-box of her family.