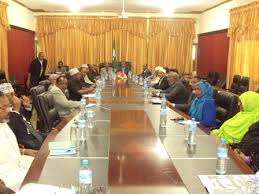 The President of the Republic of Somaliland released a reshuffle he made to the cabinet of Ministers, top army, custodial corps and coast guard positions, nominating a number of Advisors to the Presidency on the same move.

The president’s move as seen as a last-minute preparation for the upcoming presidential and Parliamentary elections slated for later this year.

The only position, so far, that the public did not fully endorse in the reshuffle that the president’s office released was that of Zamzam Abdi Adan transferred to Finance Minister to  replace the incumbent Minister, Abdi Aziz Samaale, who is widely hailed as one of the most able ministers in the cabinet – a man who raised the national budget from $47 million to more than $250 million within three years.

In all, the move is seen as a necessary step to, among others, meet the grievances of some Somaliland’s ethnic groups as it is aimed to revitalize national responsibilities ahead of the upcoming elections.

Advisors to the President