The Houthi militants who control Yemen’s capital, San’a, demanded the surrender of embattled President Abed Rabbo Mansour Hadi Wednesday and offered a bounty for his capture after drawing within striking distance of his base in the southern port city of Aden.

Early Wednesday, the Houthis took over Al Anad, a key southern air base, extending their recent military push southward from San’a in central Yemen. They claimed the base after having moved hundreds of their forces into the southern al-Dali and Lahij provinces on Tuesday, according to four Lahij military officials. A Yemeni military commander said the Houthis had seized about 45 tanks there. 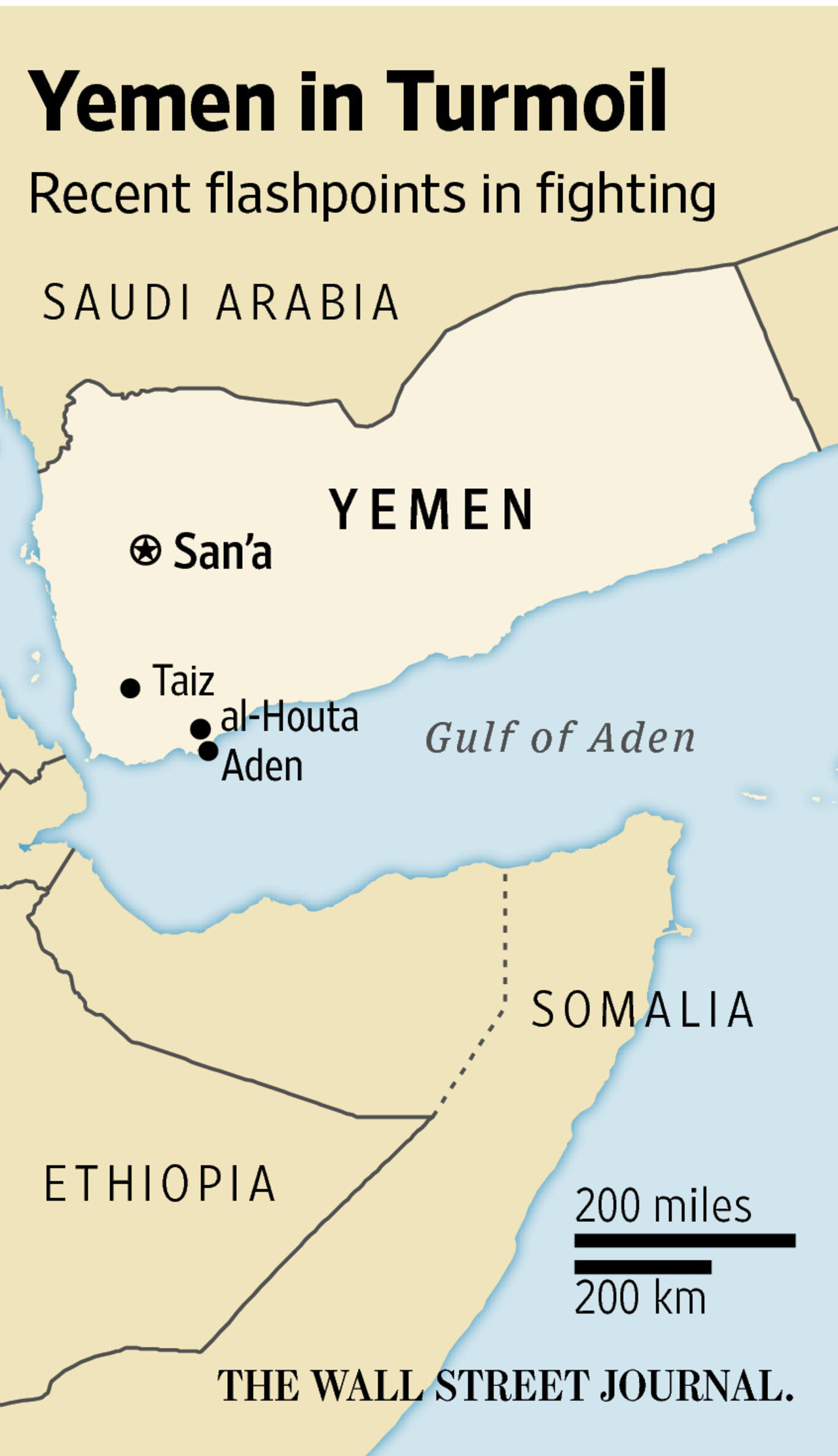 That put them just two dozen miles from Aden, where the Western-backed Mr. Hadi and security forces loyal to him have been trying to hold out against an intensifying Houthi assault.

One of Mr. Hadi’s aides said that following the takeover of the air base, he was evacuated from the presidential complex and taken to a secure location elsewhere in Aden. The Houthis later offered a bounty of 20 million Yemeni rials ($93,000) for his capture, according to the Houthi-controlled Yemen TV.

In another setback for the former leader, the aide said that the Houthis had also arrested Mahmood Al Subaihi, his defense minister, and Faisal Rajab, his top military commander. Both arrests took place on Wednesday in Lahij province, which borders Aden.

The Houthis’ recent gains are causing concern among both Yemeni officials and the international community, including the United Nations, that the country is sliding toward an internal conflict along the lines of the turmoil that has engulfed Syria, Iraq and Libya. Like them, Yemen is divided along a multitude of political and sectarian lines, while terrorist groups, including a powerful al Qaeda arm and a self-proclaimed Islamic State affiliate, have taken root amid the chaos.

The Al Anad base is one of the south’s most strategic military assets. U.S. special forces had been stationed there as part of counterterrorism operations carried out in cooperation with Mr. Hadi until their evacuation last week. The U.S. pulled out the forcesbecause of the deteriorating security situation, potentially jeopardizing long-running operations that include drone strikes.

The Houthis hail from northern Yemen and are part of the Zaidi offshoot of Shiite Islam. Their militants extended their control southward starting last year, and overran San’a in September. After four months of U.N.-mediated political talks failed, the Houthis took over government in February.

‘There is no need for us to enter Aden. Hadi has two options: to either surrender Aden and himself, or flee Aden like he fled San’a’

Mr. Hadi was placed under house arrest, but soon escaped and fled to Aden, where he enjoys strong support among local security forces. He has since been trying to stage a comeback, while the Houthis have been moving to consolidate their control over central and southern provinces.

Houthi military commander Hussein Al Madwami, who was involved in the Al Anad assault, urged Mr. Hadi to surrender. He said the president must be handed over to the Houthis to end their assault.

“There is no need for us to enter Aden,” he said. “Hadi has two options: to either surrender Aden and himself or flee Aden like he fled San’a.”

“We are using the same tactic we always use in military operations: infiltrate our fighters 24 hours before we invade a town,” he said. “Our fighters help ease our operation and give us specifics of where exactly we need to attack. This will not happen if Hadi surrenders.”

Amid Wednesday’s chaos, unknown gunmen raided the Sabr central prison in Lahij and freed all the inmates, who numbered more than 500, according to two provincial officials.

The Houthis’ latest push began with Sunday’s assault on the southern city of Taiz. Houthi fighters took over the airport and some government buildings and set up checkpoints. The city’s governor resigned on Tuesday, effectively giving control to the Houthis. 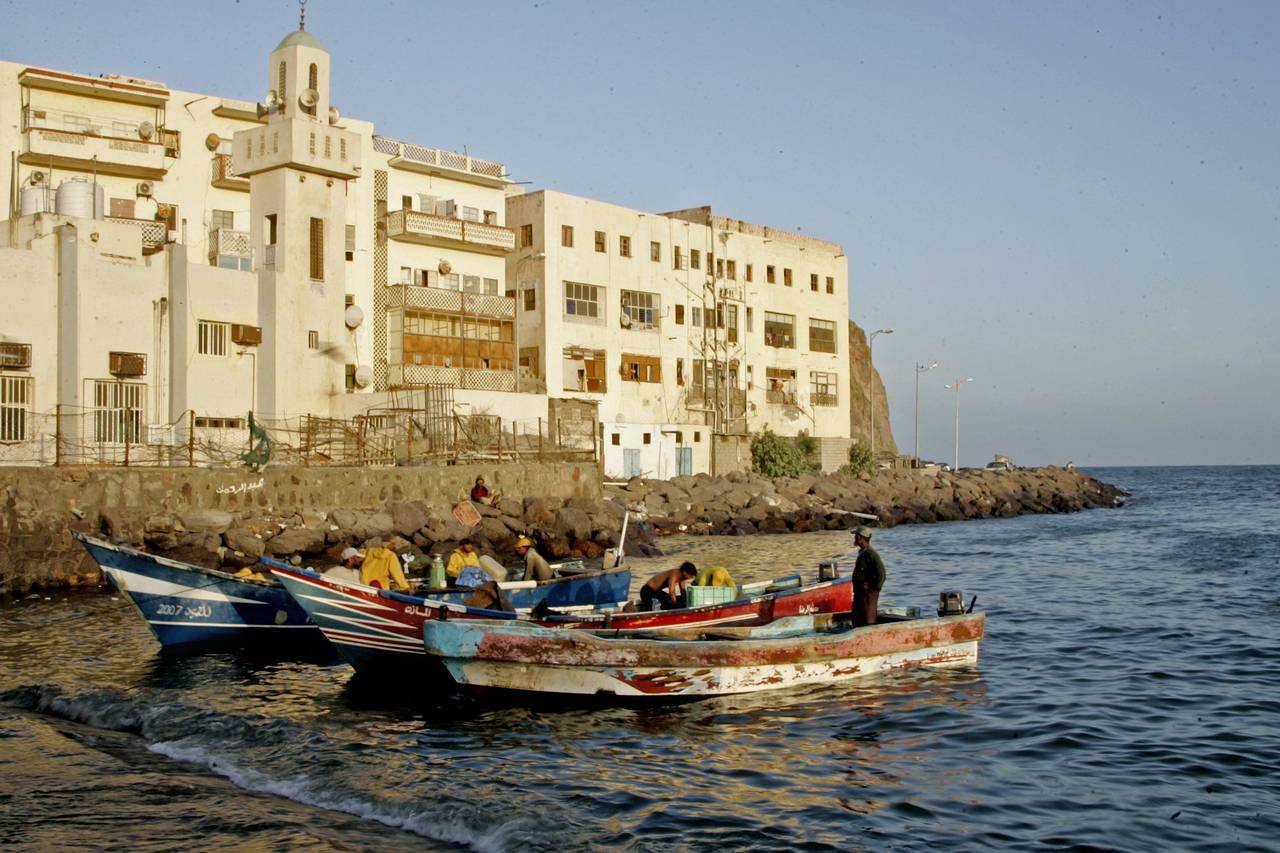 Thousands of people have taken to the streets daily in Taiz to protest the Houthis’ presence since Sunday. Eight demonstrators died there and 45 were injured Tuesday in clashes with Houthi security forces, organizers said. That toll couldn’t be independently verified.

The growing instability has led Mr. Hadi to call for military intervention by regional powerhouse Saudi Arabia, his most important ally. In response, Prince Saud Al Faisal, Saudi’s foreign minister, told Saudi state media this week that if the crisis wasn’t resolved quickly, his government would ‘take the necessary measures” to protect the region.

He didn’t elaborate on what those measures would be.

Any intervention by Saudi Arabia stands to up the ante in Yemen by drawing in regional rival Iran, which supports the Houthis.

Two Houthi military commanders said on Wednesday that Saudi Arabia appeared to be building up troops along its southern border, with some of the troops visible from the Yemeni side of the border. Saudi Arabian officials couldn’t be reached for comment.

Saudi Arabia has intervened in Yemen before in an attempt to stop the rebels’ progress. In late 2009, its troops entered Yemen to combat Houthi incursions across the Saudi Arabian border.