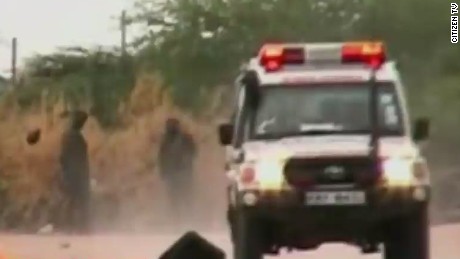 The ambulances come and go through the gates of Garissa University College, as townspeople strain from a distance to see what’s going on.

Soldiers shoo and drag them away, but they keep coming back.

In this small town, about 90 miles (145 kilometers) from the Somali border, nothing much usually happens.

But not so Thursday, when Al-Shabaab militants raided the Kenyan campus, leaving 147 dead.

A day later, there are still bodies on the school grounds waiting to be transported off.

A medic said most of the victims had been shot from behind, in the back of the head.

“They’re facing down, always,” a worker with St. John’s ambulance service said Friday. “They’re always facing down, and they’re shot in the heads, around the back.”

On Thursday, a detonation and nattering gunfire cut through the morning quiet, tearing many students in dormitories out of their sleep. “Never heard anything like this,” journalist Dennis Okari from CNN affiliate NTV said in a tweet, as he watched smoke rising over a student hostel.

Al-Shabaab gunmen had first stormed a Christian prayer service, where they killed some and took others hostage. Then they went across campus with them, shooting non-Muslims and sparing Muslims, a witness said.

They headed for the hostels.

Student Japhet Mwala lay in her bed. “We were sleeping when we heard a loud explosion that was followed by gunshots, and everyone started running for safety,” she told Agence France-Presse.

“There are those who were not able to leave the hostels where the gunmen headed and started firing. I am lucky to be alive because I jumped through the fence with other students,” she said.

Students ran — some crawled — away from the gunfire, Okari said. At one point, the gunmen pinned down a building where 360 students lived, Interior Minister Joseph Nkaissery said.

Okari took cover outside the campus and listened to explosions and gunfire for four hours. Kenyan security forces moved in and killed four gunmen. 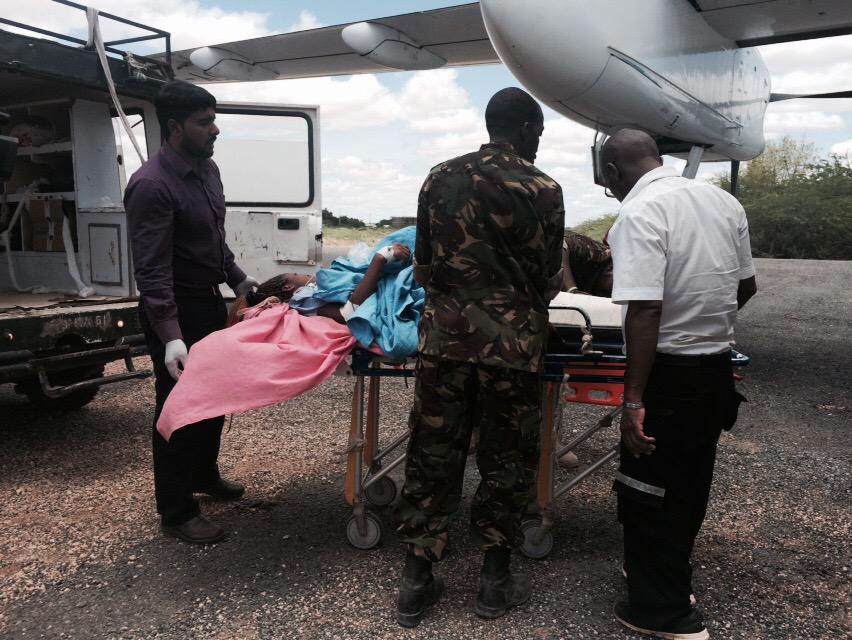 The Interior Ministry has posted a “most wanted” notice for a man in connection with it. It offered a reward of 20 million Kenyan shillings, about $215,000, for Mohamed Mohamud, who goes by the aliases Dulyadin and Gamadhere.

The post does not say what role the man may have played. 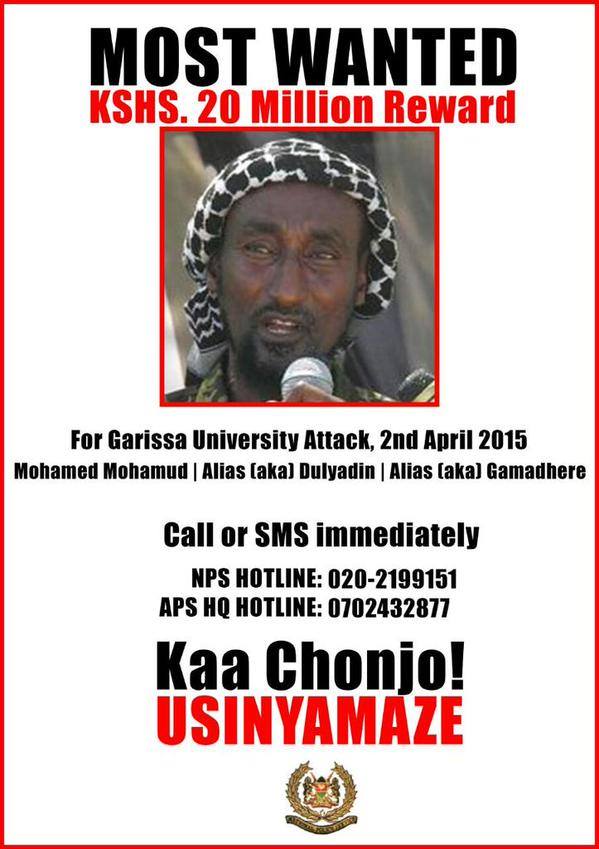 The dangerously porous border between Somalia and Kenya has made it easy for Al-Shabaab militants to cross over and carry out attacks.

In a December attack at a quarry, Al-Shabaab militants separated Muslims from others and executed the non-Muslims, killing at least 36 people. In November, militants stopped a bus near the border and killed 28 people they believed to be non-Muslims.

Last month, the U.S. Embassy warned of possible attacks “throughout Kenya in the near-term” after the reported death of a key al-Shabaab leader, Adan Garaar, who was suspected in the September 2013 Westgate Mall attack in Nairobi.

Police have declared a curfew for the next several days in the region from 6:30 p.m. to 6:30 a.m. The Education Ministry has closed the university indefinitely.

Surviving students have gathered in large groups at the town’s airport, waiting to be flown out to their hometowns.

The effects are also being felt 225 miles west in Kenya’s capital of Nairobi, where the new bloodshed reinvigorated an old debate: Is the nation’s security strong enough?

Many thought measures taken after the Westgate Mall massacre had filled the gaps.

At least 67 people died then. But Thursday’s attack is the second-worst in the country’s history, and it has evaporated much of the confidence won after Westgate. Civil liberty concerns had held up the enrollment of 10,000 new police recruits, but on Thursday, Kenyan President Uhuru Kenyatta gave a directive to process them.

“Kenya badly needs additional officers,” he said, “and I will not keep the nation waiting.”