“There’s a drug house they just tore down,” said 18-year-old Chandler Bowman, behind the wheel of his Chrysler Sebring. 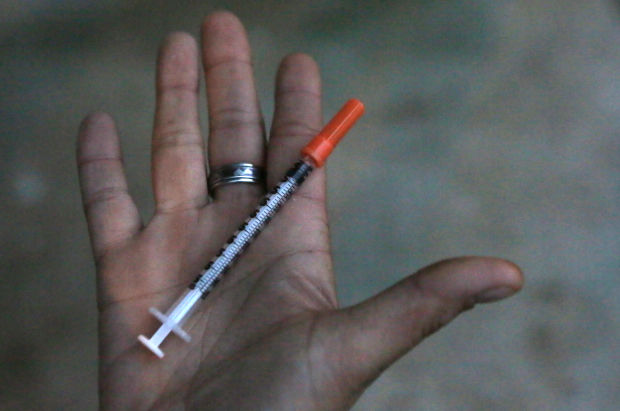 “Someone just hit this house recently on drugs,” said his high school classmate and passenger in the car, Holli Reynolds, 18. A second later, she added, “And this is where I live.”

They pointed out a popular pickup spot for prostitutes, a neighborhood where they can smell meth in the air in the summertime, houses with garbage piled up in the front yards.

The students were showing a visitor from the opposite end of the state how extreme poverty, intravenous drug addiction and its remote location had ravaged their small town long before the largest HIV outbreak in Indiana history made it a national example in what can go wrong when those ingredients mix.

That said, the teens insist they don’t want to leave Austin in their rearview mirror when they go off to college; that brain drain is part of the reason things got so bad to begin with, they said. They plan to come back, to help clean things up. Both want to be high school teachers.

As of Friday, there have been 130 cases of HIV diagnosed in southeast Indiana since December, according to the Indiana State Department of Health. That number is expected to increase as more people get tested. The cases are centered around Scott County and, in particular, Austin, a town of 4,225 about 35 miles north of Louisville, Ky.

“I think what happened in southeast Indiana can happen in any county or any city in the state of Indiana or United States,” said Tammy Morris, executive director of the Aliveness Project of Northwest Indiana, an agency that delivers HIV and AIDS services out of Merrillville. “People have become very complacent. The way medications are going right now, people look very healthy. There’s no way, physically, to tell if someone has the HIV virus.”

Most of the infections in southeast Indiana resulted from IV use of the prescription painkiller Opana. State investigators have yet to locate where the drug is coming from, though they say it’s not being prescribed in Scott County. One possible reason for the outbreak is that a single pill of Opana, once crushed and liquefied, contains eight injections, making it natural for sharing. A bag of heroin, by comparison, is generally used in just one injection. Opana also sells on the streets for as much as $160 a pill.

Narcotics experts said Opana abuse isn’t as widespread in Northwest Indiana — heroin is the opiate of choice in the region — but warn that sharing needles containing any drug puts users at risk for HIV infection.

“What I can say is that statewide, nationally, locally, opiate addiction is an epidemic,” said Aaron Kochar, director of education and prevention at Porter-Starke Services, a mental-health and drug-treatment agency based in Valparaiso. “We are continuing to recognize that opiate abuse is a tremendous problem. We see it in our communities all the time.”

Kochar said the danger of Opana is that it is an extended-release pill, meaning that when it is crushed up and injected it is extremely potent.

Last month, Gov. Mike Pence declared a public health emergency in Scott County, allowing it to operate a needle exchange, which are otherwise illegal in Indiana. As of Friday, the Austin Community Outreach Center has distributed more than 5,300 clean syringes to 86 people and collected roughly 1,400 used syringes. Officials more recently began operating a mobile needle-exchange unit, acknowledging that many addicts still worry about visiting the facility for fear of law-enforcement reprisal.

People who use the program receive a card identifying them as an IV drug user, which shields them from arrest or prosecution; unlawful possession of a syringe is normally a Class D felony. The addicts is given a week’s worth of clean needles based on how many times a day they shoot up.

State officials established the so-named One-Stop Shop at the outreach center for the needle exchange and HIV testing, as well as immunizations, substance abuse referrals and enrollment in the state’s Medicaid program.

“HIV is just the tip of the iceberg,” said Dr. Jennifer Walthall, Indiana’s deputy health commissioner. “There are so many layers that need to be addressed.”

The town’s lone physician, Dr. William Cooke, has been operating a HIV clinic out of his practice on Austin’s main drag, taking care of patients that, in many cases, he’s known personally for years.

“People are living desperate lives in desperate situations,” he wrote in an email last week after a rather emotional day of treating HIV patients. “My office is here to try to make a difference in each of these lives. We have a lot of work to do.”

A patient diagnosed as HIV-positive is then tested for other diseases, most notably hepatitis C, the progression of which is enhanced by presence of HIV, Walthall said. The person is then put on a medication regiment to decrease his or her viral load, reducing the risk of HIV complications. The lifetime cost of HIV treatment ranges from $253,000 to $402,000, according to the Centers for Disease Control and Prevention, which is also on the ground in Austin.

As local, state and national officials try the head off the outbreak, many people in Austin said they weren’t surprised by it.

“It’s not something that just arrived two weeks ago,” Austin Police Chief Donald Spicer said. “We’ve been dealing with this for years.”

A sense of paranoia abounds

Paranoia is evident as you drive around the streets of Austin. People sometimes come out of their houses and get on the phone if they see someone they don’t recognize. No-trespassing signs and warnings that you are being monitored by video surveillance adorn many houses.

One sign that stands out sits on the porch of Tammy Breeding’s home in north Austin. It reads: “No loitering and prostituting in front of or around these premises. Violators will be prosecuted.”

The 41-year-old grew up in nearby Scottsburg before moving back to the area about nine months ago, not knowing things had gotten so bad. She said she got sick of finding syringes in the yard where her kids play, of seeing drug and sex deals go down on the street that runs past her picture window.

“We just want it gone. It’s time we take back our streets,” she said, wearing an “Autism mom” T-shirt and a gun on her hip. She added that while she’s not afraid, she wants to protect her children and neighbors from the criminals in Austin. “If they want to do something, Mr. Ruger will meet them in the end. And I don’t miss my target.”

Across town on a recent soppy, cool evening, Tiffany Prater and some friends hung out in the street, a stray dog wandering around, unacknowledged by any of them. Prater had just returned from the One-Stop Shop, where she got clean needles for injecting Opana and a biohazard box to safely store her dirty syringes.

“Before this, people would just throw their needles down,” she said.

The 28-year-old said she was screened for HIV, and the test came back negative. She admits having shared needles with people who since have been diagnosed with the virus.

Young adults walked around the streets aimlessly, smoking cigarettes. The same cars circled the block multiple times. People walked in and out of one another’s houses like the neighborhood was one big commune.

“I don’t got much food, but I’ll share this cookie with you,” one of Prater’s friends said, handing her half an oatmeal cream pie. Prater proceeded to dip her feet in the creek in front of her house, saying that’s how she washes them.

“That’s what people do when they’re high: They’re out of their mind,” said the friend, 30, a gaunt former prostitute who also is addicted to Opana.

Prater said, like most addicts in Austin, she used to abuse Oxycontin, another prescription opiate, but switched to Opana because of its more intense high (which also means the withdrawal is that much more severe). She said she wants to clean up her act; she just doesn’t have the means, nor does Austin. The nearest drug treatment center is more than 30 miles away.

“I think if the government is wanting to help us users, I think they need to put a clinic here or more vocational programs or even letting convicted felons get a job. Because I’m a convicted felon, so it’s hard for me to get a job,” she said, her eyes glazed, her pupils tiny. She later added: “I hate that it had to be HIV to get people to wake up and pay attention to us.”