Chelsea midfielder Cesc Fabregas will only miss one match after the Football Association reduced his ban following his red card against West Brom.

The Spaniard was sent off for violent conduct after kicking the ball at Chris Brunt’s head in the Premier League champions’ 3-0 loss at The Hawthorns. 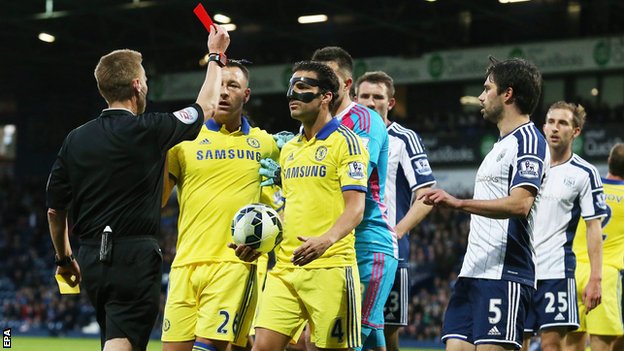 The offence normally carries a three-match ban but Chelsea successfully argued that would be “excessive”.

Fabregas, 28, will now only miss Sunday’s home game with Sunderland.

With his side 1-0 down, Fabregas hit Brunt on the head with the ball as Mike Jones tried to restore order following a tussle between Diego Costa and Gareth McAuley.

A statement from the Football Association read: “A claim by Chelsea that the three-match suspension for Cesc Fabregas is excessive has been upheld by an Independent Regulatory Commission hearing.”

Chelsea boss Jose Mourinho partly blamed Monday’s defeat on the weakness of their Premier League rivals, who “let us win the title so early”.