Somalia’s president has lashed out at the government of neighbouring Kenya – accusing it of a “heavy-handed” approach to regional security, and specifically criticizing Kenya’s recent decision to clamp down on money transfer companies allegedly linked to the militant group, al-Shabab.

In an interview with BBC News, President Hassan Sheikh Mohamud described the remittance industry as “a lifeline” for millions of Somalis and for others across the region, and said “the massive closing of accounts, the closing of remittances” was counter-productive. 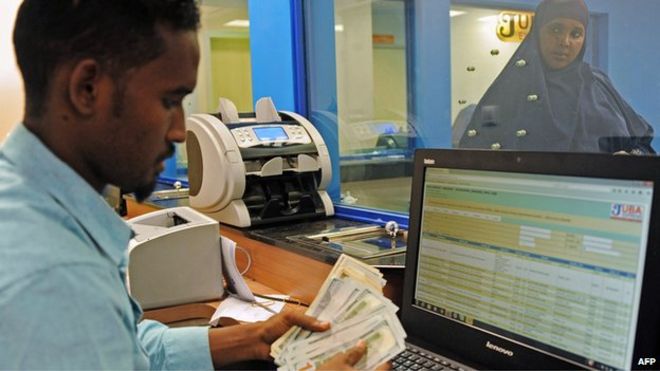 Following the massacre of 148 students at Kenya’s Garissa University in April, the authorities shut down 13 Somali money transfer agencies, arguing that they were channelling funds to terrorists.

Asked if Kenya was mishandling the security threat posed by al-Shabab, President Hassan Sheikh said: “I would not say [they’re doing it] the wrong way. But I would say there are better ways to do it. I would have suggested that the Kenyan government change their strategy.”

It is estimated that an astonishing $1.3bn (£840m) is sent to families in Somalia every year by relatives who fled the country during two decades of conflict, to join the diaspora. 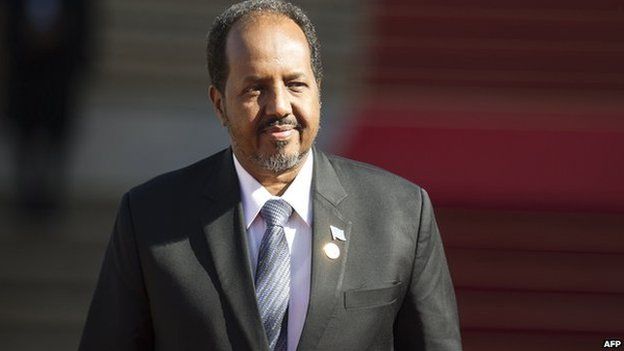 That is roughly half of Somalia’s gross national income – and 80% of total investment – easily eclipsing all international aid to the country. The World Bank estimates that 40% of all Somalis depend on remittances for their basic needs.

“We were getting money from relatives in Kenya. It was helping to pay for school and university fees. Now we’re even having to cut back on meals,” said Moalim Mohamud, a Koranic teacher in one of the crowded makeshift camps for families displaced by conflict in Mogadishu.

And it is not just Kenya’s actions that are causing hardship here. Banks in the US and Europe, seeking to avoid the risk of potential fines from regulators, have also been closing the accounts of some Somali remittance companies.

We’re resilient people. Finding ways around problems – that is a necessity

This is happening despite precious little evidence that money sent to Somalia has ended up in the hands of militant groups like al-Shabab.

“It’s very difficult. My daughter didn’t go to school now for two months,” said a woman named Hawa, emerging empty-handed from a branch of the Dahabshil remittance company on a narrow street in Mogadishu’s old quarter. “My brother in America [used to] send me $100 every month,” she said. 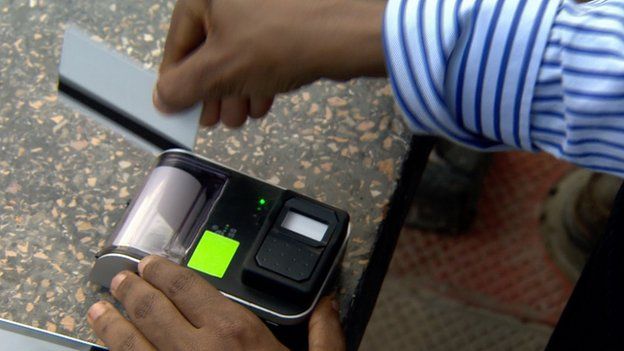 This hand-held device, known as Camelcash, can help firms get round the clampdown

Although the remittance business has not stopped altogether, some speculate that some Somalis abroad – who have often struggled for years to raise the money to send back home – may be taking advantage of the new restrictions to ease off on a burdensome obligation.

But Somalis are famously entrepreneurial, and some businessmen in Mogadishu are already looking for ways to turn yet another challenge into an opportunity.

“We’re forced to come up with solutions. We’re resilient people. Finding ways around problems – that is a necessity,” said Liban Egal, showing off a new machine that he hopes will convince US banks to keep the remittance industry afloat.

The handheld device, dubbed Camelcash, combines a fingerprint scanner with wi-fi, a card reader and printer.

It is a way of confirming someone’s identity in a turbulent country, which – after decades without a functioning government – still lacks a proper national ID system.

“The banks’ concern is who’s picking up the money in Somalia – they don’t want to be penalized if the money goes to the wrong hands. So this device can authenticate the customer. You swipe your card here, and put your finger right here,” said Mr Egal, before swiftly moving on to talk about Somalia’s extraordinarily successful cashless mobile phone banking system – another example of an entrepreneurial society finding ways to flourish.