Hundreds of thousands of Somali refugees have fled Al-Shabab across the border. But in Kenya, they face racial profiling, police searches and the constant threat of repatriation. 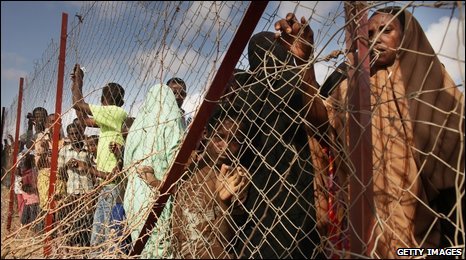 Mohamed Haji Hasan fled his home in Mogadishu four years ago, after the Islamist group Al-Shabab came to the office of the television station where he worked. They confiscated equipment and gave staff a stark choice: join us, or die. For a while he stayed on, lying low, but the text message threats became more frequent; the news of colleagues being shot dead too hard to ignore. He fled to Kenya, the neighbouring country, and sought asylum.

When I met him last year, he was living in the capital city Nairobi and working as a journalist for a Somali-language radio station. But all was not well. “I came here to get free, to get life. But everything has changed. The Kenyan government says that Al Shabab elements are present in Eastleigh [a Somali slum in Nairobi], the same element we ran away from. We don’t know where else to go.”

There is no doubt that Al-Shabab is active in Kenya. Perhaps the most high profile incident was the three day siege of the Westgate Shopping Mall in Nairobi in September 2013, which left more than 175 people dead. More recently, in April this year, gunmen stormed the Garissa University College, not far from Kenya’s border with Somalia, and killed 147 students.

These horrendous attacks shocked Kenya and the world. They have had far-reaching implications – not least on Kenya’s large population of Somali refugees. After the Westgate attack, a crackdown began. Thousands of Somalis were rounded up, arrested, and some even deported to Mogadishu. After the Garissa attack, the situation has been little better. President Uhuru Kenyatta threatened to expel all Somali refugees from the country within three months. He vowed to close Dadaab, which as one of the world’s largest and oldest refugee camps is home to more than 350,000 Somalis. Government officials said that Dadaab was a breeding ground for Al-Shabab. Meanwhile, Eastleigh was, yet again, subject to an intense search operation.

For the residents of Eastleigh, this is nothing new. When I met Mohamed in May last year, he said he had been searched 8 times that month alone. His colleague, Said Hassan Anteno, who had lived in Kenya for five years, had a similar story to tell. “Sometimes you can’t get to work freely because of the checkpoints. It used to be a business hub, but now it’s a military frontline. Police intimidation is part of our daily life. When they see Somali person, they assume that you are illegal. I have paid a lot of money in bribes. They don’t accept that I am legal, even though I have a refugee card. They say it’s fake and demand money.”

Under pressure from the UN, Kenyatta has now pulled back from the threat of forced repatriations for Somalis, some of whom have lived in Kenya for decades. But Somali refugees are still under enormous pressure. According to Refugees International, the two initiatives – a clamp down on Dadaab and the security operation in Nairobi – has opened the door to increased levels of “abuse, extortion, and harassment of refugees by the Kenyan police”. This affects every aspect of life; Somali residents describe being unable to board buses if they have large bags, as they are deemed a security threat. As Said and Mohamed described, police regularly stop them and demand ID, and then ask for bribes. Houses in Somali areas are raided at all times of day or night.

This crackdown, which according to most analysts and anecdotal reports is based more on racial profiling than any meaningful intelligence, has also affected Kenyan citizens of Somali descent. Abdirisak Osman was born in Nairobi to Somali parents, and has a Kenyan passport. “I was born and bred in Kenya. I’m a Kenyan, but just because of my look, my appearance, I get the same treatment, even if I produce my ID or speak Swahili. It’s profiling the Somalis. How can I be patriotic when I am treated like this?”

All of these men, like many other Somali refugees in Nairobi and elsewhere in Kenya, have the legal right to be in the country, yet find themselves vilified by the media and harassed by the police. “Eastleigh has become a hunting zone,” said Abdirisak. “Every predator is coming here to seek bribes.”

This harsh treatment comes despite the fact that security experts say that there is no evidence linking either Dadaab or refugees more generally to Al-Shabab. “This is collective punishment,” said Mohamed. Kenya is home to rising religious tension and longstanding ethnic rivalries; it is against this backdrop that the vilification of Somalis has become so prevalent. It is difficult to see the continued scapegoating of this community as anything other than a government desperate to detract attention from its inability to protect citizens by scapegoating the other.

“We Somalis are the most victimised people in this world,” Said told me last year. “Al-Shabab, they kill us, back home and here. At the same time, we are being accused of being Al-Shabab. We want to stay here, but it’s tough. Kenya was Plan A, but I think we need to find Plan B, because we cannot live like this. We cannot survive.”