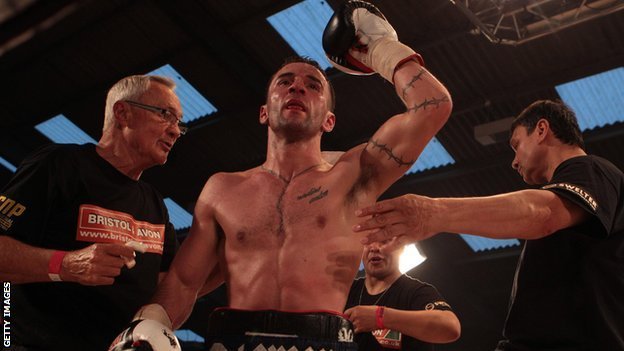 Haskins dominated from the first bell and floored his opponent in the sixth moments before the fight was stopped.

The victory opens the door to a potential fight against IBF champion Randy Caballero, currently injured.

“I’ve had 35 professional fights and that was the best performance,” said 32-year-old Haskins.

It was only Iwasa’s second defeat in 21 fights but, fighting outside Japan for the first time in his career, the 25-year-old struggled at the Indoor Action Sports Centre in Whitchurch.

Haskins, who takes his record to 32 victories from 35 fights with three defeats, could also opt for a rematch with WBA bantamweight champion Jamie McDonnell.

A confident start from the Englishman saw him catch his opponent on several occasions with some classy switch-hitting while Iwasa preferred to box behind his jab.

A booming left-right combination unsettled the Japanese early in the second round before Haskins also enjoyed success late in the round as his quick start continued, watched at ringside by Britain’s latest world champion Lee Selby and roared on by partisan home support.

The visiting fighter enjoyed his best round in the fourth with an early left hook and two further shots catching Haskins as the fight continued at a ferocious pace.

A left hook caught Haskins flush in the sixth but despite a bloodied nose he took the shot well and came back to floor his opponent with what he later called “the shot of his career”.

Iwasa survived the count but moments later Haskins finished the job with a barrage of shots, leading referee Phil Edwards to stop the fight.