With five million citizens to protect and billions of investment dollars at stake, China is rethinking its policy of keeping out of other countries’ affairs.

China has long made loans conditional on contracts for its companies. In recent years it has sent an army of its nationals to work on pipelines, roads and dams in such hot spots as South Sudan, Yemen and Pakistan. Increasingly, it has to go across borders to protect or rescue them.

That makes it harder to stick to the policy espoused by then-premier Zhou Enlai in 1955of not interfering in “internal” matters, something that has seen China decline to back international sanctions against Russia over Ukraine or the regime of Syrian President Bashar al-Assad.

As President Xi Jinping’s “Silk Road” program of trade routes gets under way, withinfrastructure projects planned across Central Asia, the Indian Ocean and the Middle East to Europe, China’s footprint abroad will expand from the $108 billion that firms invested abroad in 2013, up from less than $3 billion a decade earlier.

That is forcing China to take a more proactive approach to securing its interests and the safety of its people. With more engagement abroad there’s a risk that China, an emerging power with a military to match, is sucked into conflicts and runs up against the U.S. when tensions are already flaring over China’s disputed claims in the South China Sea.

“It is going to be a long, hard haul,” said Kerry Brown, director of the University of Sydney’s China Studies Centre. “You either have disruption as a new power rips up the rule book and causes bedlam or you’ve got a gradual transition where China is ceded more space but also expected to have more responsibility.”

For more than a half century China stuck to Zhou’s policy predicated on non-interference and respect for the sovereignty of others. The policy partly reflected a focus on domestic stability and economic development by governments that lacked the means or interest to play a more active role offshore. It also led President Barack Obama to last year describe China’s leaders as “free riders” while others carried the global security burden.

China’s greater involvement in projects around the world comes alongside its military expansion, as it seeks to project its power abroad and challenge decades of U.S. dominance of the global economic and strategic order. U.S. policymakers are debating whether to find ways to accommodate China’s rise or to seek to contain it.

As China’s policy evolves its leaders are dipping their toe into areas once considered taboo, including the practice of dealing only with a country’s leaders.

Xi met Myanmar opposition leader Aung San Suu Kyi in Beijing on June 11 to lay the foundation for improved ties ahead of a November election in Myanmar, and there are reports China has hosted peace talks between the Afghan government and Taliban. 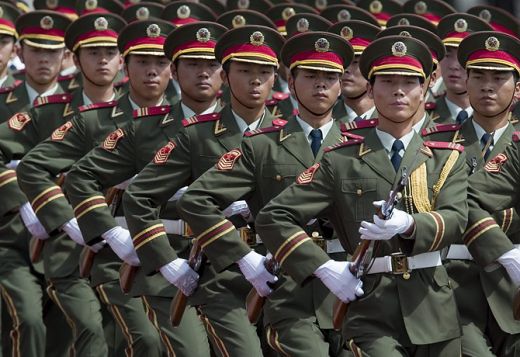 On June 9 China called for a cease-fire in Yemen, during a teleconference between China’s ambassador Tian Qi and the United Nations envoy to Yemen, according to a posting on the website of China’s embassy.

“Protection of nationals and interests abroad particularly with big new projects like the Silk Road in the works, is likely to be long-term very significant for China’s evolution as a great power,” said Jonas Parello-Plesner, a diplomat at the Danish embassy in Washington, DC. “How China behaves in other parts of world will be a litmus test on its road to great power status.”

Chinese investment abroad picked up from 2002 after then-Premier Jiang Zemin championed a “going out” policy, even as he repeated China would not meddle in the internal affairs of other countries.

Parello-Plesner and Mathieu Duchatel, who co-wrote “China’s Strong Arm: Protecting Citizens and Assets Abroad” estimate there are five million workers offshore, based on research and interviews with officials, a figure that’s about five times larger than that given by the Ministry of Commerce.

The official data reflect a lack of systemic consular registration and the absence of formal reporting by subcontractors sending workers abroad, according to Parello-Plesner and Duchatel, who estimate about 80 Chinese nationals were killed overseas between 2004 and 2014. Duchatel is a Beijing-based senior researcher at the Stockholm International Peace Research Institute.

“There are now several countries that – in terms of the number of Chinese citizens there – are ‘too big to fail’,” said Parello-Plesner. “The business-oriented ‘going-out’ strategy now has to be squared with broader strategic calculations.”

China’s foreign-policy evolution is becoming institutionalized. The concept of protecting nationals was added to the priority list at the 18th Communist Party Congress in 2012. The PLA’s role in protecting China’s interests abroad was enshrined in the 2013 Defense White Paper for the first time.

“While China is not likely to publicly drop the non-interference principle what we’ll see is increasing fluctuation in how it is applied — or not applied,” said Alexander Sullivan, an associate fellow at the Center for a New American Security in Washington.

“The departures from this policy that we have seen thus far have been driven generally by commercial and resource interests that for one reason or another come under threat.”

Sullivan said Sudan and South Sudan have been a testing ground for China policy. After the outbreak of civil war in South Sudan, China persuaded other members of the Security Council in May last year to extend the United Nations peacekeeping mandate to South Sudan, where China National Petroleum Corp. has oilfield investments. China has sent 700 troops to join that mission.

China’s biggest overseas intervention was in Libya in 2011, when 35,000 workers weretransported out at the start of the uprising against Muammar Qaddafi’s regime, mostly by air and sea.

As the trade route projects get under way, Pakistan will pose one of the biggest risks to the security of Chinese workers. The first investment of China’s $40 billion Silk Road infrastructure fund is $1.65 billion for the Karot dam on the Jhelum river in northern Pakistan.

Before announcing the project, Pakistan agreed to train a 10,000-strong security force to protect Chinese nationals building a $45 billion economic corridor from China to the deep-water port of Gwadar on the Arabian Sea. The route runs through Baluchistan, a thinly-populated Pakistan province where an insurgency has killed thousands.

“Chinese foreign policy is taking a bigger role in global problem solving,” said Pang Zhongying, dean of the Institute of International Affairs at Sun Yat-sen University in Guangzhou. “The Silk Road is in essence bringing a lot of foreign policy changes but we still know little about its prospects.”