Racism remains “a blight” on society, US President Barack Obama says, in the wake of the killing of nine African-Americans in a South Carolina church.

Police are treating the killings at the church in Charleston on Wednesday night as a hate crime.

He showed no emotion as relatives of the victims addressed him directly. “I forgive you” said one victim’s daughter, fighting back tears.

Speaking in San Francisco, Mr Obama said: “The apparent motivations of the shooter remind us that racism remains a blight that we have to combat together.

“We have made great progress, but we have to be vigilant because it still lingers.

“And when it’s poisoning the minds of young people, it betrays our ideals and tears our democracy apart.”

But the president praised the families of the victims for the forgiveness they had shown.

He said it was “an expression of faith that is unimaginable but that reflects the goodness of the American people”.

“It’s not enough for us to express sympathy; we have to take action,” he said.

At a Charleston sports arena, thousands gathered on Friday evening to remember the victims with prayers. They joined hands to sing We Shall Overcome. 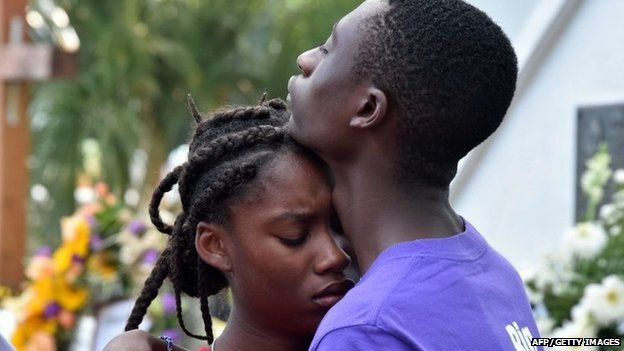 Mr Obama praised the forgiveness of the local community. 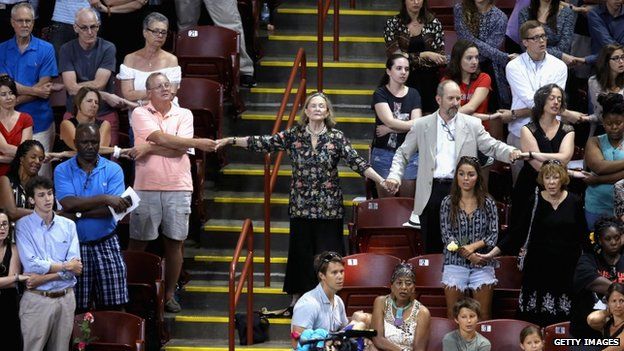 Thousands attended a vigil at a local arena, singing We Shall Overcome

Ahead of the vigil, Mayor Joseph Riley said: “A hateful person came to this community with some crazy idea he’d be able to divide, but all he did was unite us and make us love each other even more.”

A steady stream of people also brought flowers to place at a memorial in front of the church.

The Roof family earlier released a statement through their lawyer.

“Words cannot express our shock, grief and disbelief as to what happened that night. We are devastated and saddened by what occurred,” the family wrote.

“We have all been touched by the moving words from the victims’ families offering God’s forgiveness and love in the face of such horrible suffering.”

In court in Charleston on Friday afternoon, Mr Roof spoke to confirm his name, age and address and said he was unemployed.

Then relatives were invited by the judge to come forward and speak.

A woman who identified herself as the daughter of Ethel Lance said: “You took something very precious from me. I will never talk to her ever again.

“I will never be able to hold her again, but I forgive you. And [may God] have mercy on your soul.”

Anthony Thompson, a relative of Myra Thompson, told Mr Roof to repent and to turn to Jesus Christ. “I forgive you and my family forgives you,” he said.

Also speaking in court was Felecia Sanders, who survived the attack on Wednesday night by playing dead. Her son, Tywanza, was fatally wounded.

“We welcomed you Wednesday night in our Bible study with open arms.

“You have killed some of the most beautifulest people that I know. Every fibre in my body hurts … and I’ll never be the same,” she said to Mr Roof, who appeared via a video feed.