Manchester United midfielder Juan Mata has said he was told about the size of the club’s rebuilding task before he joined in January 2014.

United have not won a trophy since Sir Alex Ferguson’s retirement two years ago and a seventh-place finish in 2014 is their worst in the Premier League.

Ten players have joined since Mata’s switch for a then club-record £37.1m  under Ferguson’s successor David Moyes.

“They told me ‘you are very important, you are one of the first’,” Mata said. 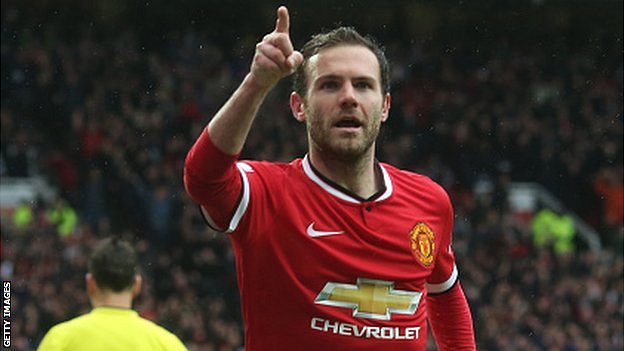 Schneiderlin scored five minutes into his first United appearance with the only goal against Club America on the tour of the United States.

“I knew the club was going to have these kind of signings,” Mata said.

The total amount spent on the 10 players is £228.1m, a figure which does not include the £6m loan fee for striker Radamel Falcao, who has since joined Chelsea.

Mata, who has scored 16 goals in 50 competitive games for United, added: “We know there is still a lot of work to do.

“It’s not just about bringing good players in. It’s about playing well and winning trophies.”

During a 12-minute interview with BBC Sport, Mata answered the following questions:

Do the signings of Morgan Schneiderlin and Bastian Schweinsteiger make you fearful of your place?

When you play for a top team you always know you have to be at your best level. There is a lot of competition for spots in the first team but I believe in myself. I always train the best I can. Between us all we have to help the team but obviously if you play for a team like Manchester United you are always going to have competition.

Where do you still need to add to the squad?

I don’t know – this is a question for executive vice-chairman Ed Woodward and Van Gaal. I am quite happy with the players we have at the moment. Obviously I think they are looking in the market to bring a few more in. Let’s see what happens.

Where has further improvement got to come from this season?

Last season we started a new philosophy with a new manager. It takes time. This season we know how the manager wants us to play. We know the way he loves to play football. It should be better for us.

What is the manager like? With the media he can be brutal but also very funny.

Like it is with you. We don’t know what to expect. It depends how we perform and how we have been training. He is very straight. He is very direct. He is very honest. It is good. You can be a good or bad manager but, apart from anything, I believe in the person. Sometimes he is tough, as you can see. But I think he does it for the right meaning.

What is his philosophy?

To win with good football. Good football means to play with the ball and make the pitch big. To create, not to wait, and to be proactive. He wants you to be the boss in the game and the team that makes the tempo. Obviously you have to adapt sometimes and you have to defend a little bit more compact and know how to play without the ball.

Were you envious at not being in the Champions League last season?

Yes. Every Tuesday and Wednesday at home watching the games, mainly with Ander Herrera and David De Gea. We need to be back there. This club needs to be fighting for the Champions League.

Is it imperative you win a trophy this season?

That is the pressure this club always has. We have to be fighting for titles. Last season we didn’t win any trophy. This season we want to win an important trophy.