From the poignant immigrant stories of Kenya-born Shad to the West Indies influence of Kardinal Offishall, the Toronto hip-hop scene has always been fairly representative of the diverse cultures and ethnicities in the city. And yet, despite being the third largest ethnic community amongstBlacks in Canada and growing, the Somali community—aside from the brief rise of K’Naan—has always felt left out of the conversation. But for Toronto-based artist Layla Hendryx, the lack of visibility is not only the fault of the city’s tastemakers but also a long-gestating internal conflict in the community. “Traditionally, Somali music is usually about men and women singing about how they love this guy while implying they may want to do dirty stuff but it’s all seen as cultural,” Hendryx who is Somali-Djibouti explains. “I remember when I started making rap music, there were these forums about me like, ‘Oh look at this Somali girl she needs God’ because I didn’t apparently know my roots. But I grew up here, in Ontario, so I’m the product of both cultures and just because I don’t want to make that kind of music doesn’t mean I’m a devil worshipper. I just find a lot of hypocrisy in that.” 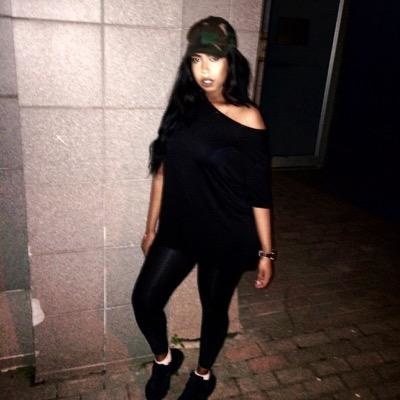 Raised primarily through her mother in Ottawa, her father was absent during her earlier years. Hendryx’s interest in music first began as scribbles in her notebook at the age of 12, and swayed by the sounds of 808 & Heartbreaks and Destiny’s Child singles, she knew she wanted to be a musician, but was certain her parents wouldn’t approve and was unsure if her peers would take her seriously. She convinced her high school friends to join her and start up a rap group they called ADX-1995. Things fell apart when it became clear that they weren’t as passionate about music as she was. “I didn’t feel comfortable to stand on my own because culturally we couldn’t pursue it. Eventually, they got tired of listening to beats and decided they were out. To them, it was a little hobby, but for me it was something I wanted to pursue.” But by senior year, she would be introduced to fellow rapper Robin Banks, who would help assist her in the studio. “We would start going to the studio and bouncing ideas off each other in terms of what I would sound like and that’s what kind of shaped me and allowed me to become better as an artist,” says Hendryx. The studio would eventually become her main priority, as she began skipping classes to pursue hip-hop. Eventually, Layla Hendryx would release the trap-inspired “Throwback N Leanin” single before dropping her debut four-track EP X-Files.

Over floaty bass-lines and melancholy piano notes, X-Files showcased Hendryx’s ear for interesting sounds and melodies. Her ability to switch between singing to rapping within the span of a single bar was an impressive feat, but it wasn’t sincere. “Honestly those four tracks were cool but the sounds on there are inspired by the people around me,” Hendryx explains. “I think after I put that project out I learned that as much as I thought I was confident, I really wasn’t—and I could hear it in the music. So I concentrated even more on my sound.” Her newfound focus wouldn’t go unnoticed by her parents, whose voicemail inbox would be filled with calls from family friends about their daughter needing better guidance, and her musical pursuits being a harm to her peers. “The Somali community like many other communities in the city is very big, but at the same time very small, so if somebody gets caught doing something you’re going to know about it next week,” says Hendryx. “I was always trying to figure out what was wrong with me, and then I started realizing maybe there’s something wrong with everybody else. I had to keep telling myself that and kind of fake that confidence, because without it how would I expect people to ride with my music if I was too scared to?” And while Hendryx’s mother wasn’t initially supportive of her career choice, she eventually gave her support. “One day my mom just came up to me and told me she used to read my old notebooks and just seemed okay with what I was doing. She still has doubts but I know she’s on my side and now that I have her it’s like nobody really matters,” says Hendryx.

Now a more experienced artist, Hendryx hopes listeners get a better understanding of who she is with her latest project, Channel 6. A natural step up from her previous EP, the project continues to tow the line between rap and R&B as she croons about a friendship lost for “On Me” while subtly throwing in rolling trap like hi-hats under airy chords in “B.T.W.” Perhaps a perfectionist by nature, Hendryx still doesn’t believe she’s found her sound. “On some days I think the music on Channel 6is my lane but I’ve already started working on more music and it’s moving into the realm of R&B and the way I see it I’m going to be as creative as I can and not going to confine myself to one genre.” But with that said, she is, confident she’s found one of her purposes in music. “I want a little Somali girl to look up to me and think they have a chance in music because I didn’t really have that. I mean I don’t want to be seen as the voice of my community but nobody from my culture is really going out and paving the way and I want people, in general, to feel like they don’t have to be constricted to the rules and follow their own path.”