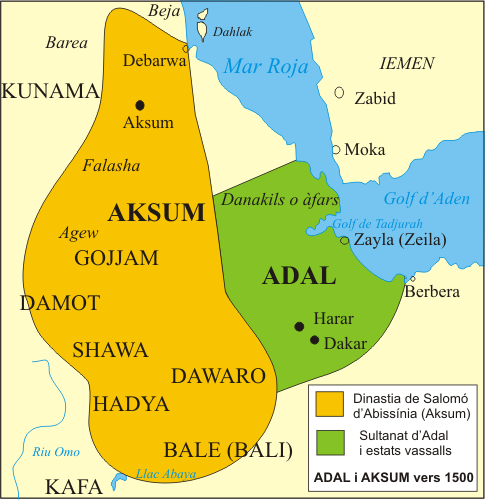 It was on the 13th century that came to the light, in Horn of Africa, one of the strongest Empires that existed in East Africa. Adal Empire had its origins in the city of Zeyla, situated until today in Somaliland. The father of that State was King Omar D. Ahmed (nicknamed Aw-Barkhadle).

The king, who had a long life, occupied the throne for many years. When he passed away, he left behind him many children, mainly males. Among them, the successors to the throne who inherited the kingdom. Later, Adal Empire became an Islamic Empire that expanded the religion of Islam with determination, into the entire Horn of Africa. Adal Empire was composed of seven (7) States. According to the size of their land and the military forces of each state, here are their names: Ifaad, Dawaaro, Araabiini, Hadaya, Sharqa, Baali and Daara, where each of them had its own government. The largest and strongest State Ifaad, known from Egypt and “Shaam” as Zeyla’s land, became later the dominant and the central one with its capital city of Zeyla. Ifaad will lead the entire Empire and will face many challenges.According to the historians of that period, Ifaad was large as 20 days of walk from North to South and 15 days of walk from East to West. Its military force was composed of 15000 cavaliers and 20000 of infantries In a book titled “Masaalikal-Absaar”(this is in Somali spelling), the Egyptian author, Subhul Ahsha mentioned that Zeyla was the nucleus city of Adal Empire. Continuing into the description of this city, he added that Zeyla was “The City of Light”, which had many Mosques and many schools, where all kind of subjects were taught. In fact, Mr. Ahsha described Zeylac as “The Place” where one can acquire any kind of knowledge that may be taught in that period of time. The author added in his description that the people were 100% Muslim. Mr. Ahsha said that they were gathering in large number into the Mosques of the city, as faithful believers to Islam. According to this writing, these Mosques could be compared to the municipal libraries that can be found today in big cities of our century. In addition of that, schools were places where people use to enjoy meeting, share knowledge, discuss about social issues and debate intellectually. As a matter of fact, Zeyla was known as the place where the knowledge was at the merci of everyone.

Remarked by its faithful actions, other Islamic States in the world called Adal Empire “Diraasal-Islaam”. The Walashma dynasty was a Muslim noble family who ruled parts of what is now eastern Ethiopia, Djibouti, southern Eritrea and western Somalia. The earliest known member of this family was Umar ibn Dunya-huz (died 1275), whose son Ali ibn Wali Ashma conquered the Muslim kingdom of Shewa. List of rulers of the Walashma dynasty Haqq ad-Din I Sabr ad-Din I Jamal ad-Din I Ali ibn Sabr ad-Din Ahmad ibn Ali Haqq ad-Din II Sa’ad ad-Din II Sabr ad-Din II Mansur ad-Din Jamal ad- Din II Badlay ibn Sa’ad ad-Din Muhammad ibn Badlay Shams ad-Din ibn Muhammad Muhammad ibn Azhar ad-Din Abu Bakr ibn Muhammad Umar Din Ali ibn Umar Din Barakat ibn Umar Din Muslim-Christian relations soured during the reign of the aggressive Negus Yeshaq (ruled 1414-29). Forces of his rapidly expanding empire descended from the highlands to despoil Muslim settlements in the Valley East of the ancient city of Harer. Having branded the Muslims “enemies of the Lord,” Yeshaq invaded the Muslim Kingdom of Ifat in 1415. He crushed the armies of Ifat and put to flight in the wastes along the Gulf of Tadjoura (in present-day Djibouti) Ifat’s king Saad ad Din. Yeshaq followed Saad ad Din to the island off the coast of Saylac (which still bears his name), where the Muslim king was killed. Yeshaq compelled the Muslims to offer tribute, and also ordered his singers to compose a gloating hymn of thanksgiving for his victory. In the hymn’s lyrics, the word Somali appears for the first time in written record.

A century later the Muslims had recovered sufficiently to break through from the east into the central Ethiopian highlands. Led by the charismatic Imam Ahmad Guray (1506-43).

Ahmad ibn Ibrihim al-Ghazi (c.1507 – February 21, 1543) was a Somali Imam and General who defeated several
Ethiopian emperors and wreaked much damage on that nation. He is also known as Ahmad Gragn (or Gurey), “Ahmed the left-handed”. He was born near Zeila, a port city located in northwestern Somalia, and married Bati del Wambara, the daughter of governor Mahfuz of Zeila. When Mahfuz was killed returning from a campaign against the Ethiopian emperor Lebna Dengel in 1517, the Adal sultanate lapsed into anarchy for several years, until Imam Ahmad killed the last of the contenders for power and took control of Harar. In retaliation for an attack on Adal in 1527-8 by the Ethiopian general Degalhan, Imam Ahmad invaded Ethiopia in 1529. Although his troops were fearful of their opponents, and attempted to desert upon news that the Ethiopian army was approaching, Imam Ahmad relied on his elite company armed with matchlocks, and defeated emperor Lebne Dengel at Shimbra Kure that March.1 Imam Ahmad campaigned again in Ethiopia in 1531, breaking Emperor Lebna Dengel’s ability to resist in the Battle of Amba Sel on October 28, then marched north to loot the island monastery of Lake Hayq and the stone churches of Lalibela. When the Imam entered the province of Tigray, he defeated an Ethiopian army that confronted him there, and on reaching Axum destroyed the Church of Our Lady Mary of Zion, in which the Ethiopian emperors had been coronated for centuries. The Adal empire had robust commercial and political relationship with the Ottoman empire the Ottoman Turks,
themselves actively engaged in wars against European kingdoms, did not pay much attention to Ethiopia Things changed when the Portuguese paid a visit to the court of Emperor Lebne Dengel, in 1492 – However, the Emperor did not see much advantage in befriending the Portuguese or how he could form an alliance that would have benefited Ethiopia. The motive of the Portuguese was to 1) spread Catholicism and 2) form an alliance with this mysterious and powerful Christian empire, which they hoped would eventually enable them to fight the Turks. The visit of the Portuguese did not go unnoticed by the Turks, who were promptly informed by their spies in Denkaz. The Turks who were in contact with Adal found Gragn to be a formidable military person with a fanatic zeal for Islam. They made a deal with Gragn: he was to subjugate the Christian empire and convert it to Islam while they would thwart any possible alliance between Ethiopia and Europe, which would have dangerously out-flanked the Turks in the Indian Ocean. The Turks provided the Adal and Gragn 900 Bombardiers, or what would be considered in today’s military terminology, artillery men. The war was, needless to say, a disaster to Ethiopia. Ethiopians were armed with only swords and spears while their enemies had guns and experienced Turkish troops under their command. The King of Adal marched out of his trenches to enter those of the Portuguese. Mohammed’s forces entered the camp, and hit the Christians to the spear. The Portuguese General (Christopher) escaped the slaughter with ten men and retreated to a wood, where they were discovered… (and killed)

Mohammed Gragne improved his victory by chasing the young Claudius (king of Ethiopia) over Abyssinia, where nothing opposed the progress of his arms. At last the few Portuguese survivors repaired to the Christian Emperor, who was persuaded to march an army against the King of Adel (Mohammed Gragne). Resolved to revenge their general, the harquebusiers demanded the post opposite Mohammed, and directed all their efforts against the part where the Moslem stood. His fellow religionists still relate that when Gragne fell in action, his wife Talwambara, the heroic daughter of Mohfuz, to prevent the destruction and dispersion of the host of al-Islam, buried the corpse privately, and caused a slave to personate the King, until a retreat to safe lands enabled her to discover the stratagem to the noble.

Thus after a 30 year jihad the King of Adal perished Mohammed was succeeded on the throne of Adel by Amir Nur, son of Majid, and, according to some, brother to the ‘left-handed’. He proposed marriage to Talwambara, who accepted him on condition that he should lay the head of the Emperor Claudius at her feet. In AD 1559, he (Amir Nur) sent a message of defiance to the Negush (Ethiopian Emperor Claudius) who, having saved Abyssinia almost by a miracle, was rebuilding on Debra Work, the ‘Golden Mount’, a celebrated structure which had been burned by the Muslims. Claudius despising the eclipses, evil prophecies, and portents which accompanied his enemy’s progress, accepted the challenge. Claudius, supported by a handful of Portuguese, were soon slain around him, and he fell covered with wounds. Amir Nur cut off his head, and laid it at the feet of Talwambara, who, in observance of her pledge, became his wife. Talwambara suspended the trophy by its hair to the branch of a tree opposite her abode that her eyes might be gladdened by the sight; after hanging for two years, it was purchased by an American merchant, who interred it in the sepulcher of St. Claudius at Antioct. The untimely death of Mohammad Gragne was a very great blow to the Somalis. His wife and her new husband Amir Nur continued fighting for seven years with the Ethiopians, but they were in fact pushed from Addis Ababa to the border near river Haiwaish (‘Awash’) because of the Portuguese help to the Ethiopian Guerillas. After seven years of fighting. Amir Nur and his wife withdrew to their previous headquarter at Harar and again Harar became the principal
Somali city. When she died, her son Amir Abdullahi succeeded.

His dynasty ruled Harar till 1884.

A number of historians have written of this ancient empire of Somaliland. Whilst several versions of this story exist, the core facts are more or less the same.

We will attempt to present to our readers what we find.