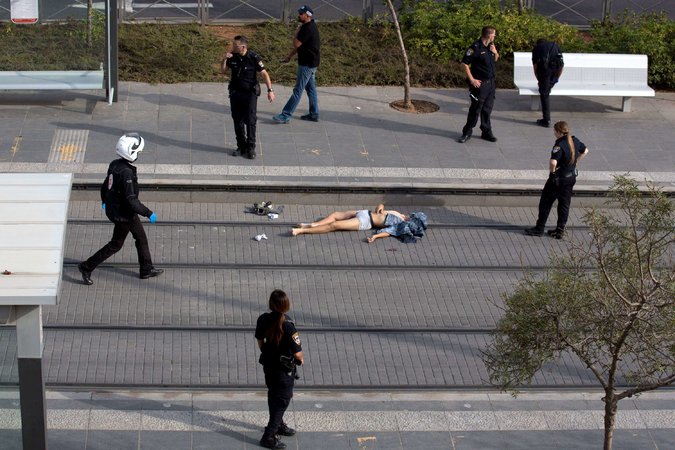 Despite an Israeli security crackdown that includes giving the police greater leeway to open fire and mobilizing 1,400 border police reserve officers, Israel is struggling to contain a spasm of violence.

Palestinians carried out four attacks against Israelis in Jerusalem on Monday alone.

In one, a 13-year-old Israeli boy in Pisgat Zeev, a Jewish area of East Jerusalem, was riding his bicycle when two Palestinians from a nearby neighborhood stabbed him, wounding him critically, according to the police. The assailants, cousins 13 and 15, also severely wounded a 25-year-old man.

The younger attacker was injured as he tried to flee, apparently hit by a car, according to the police. Officers fatally shot the elder one, the police said, when he charged at them with a knife and ignored calls to stop.

Two Israelis have been killed and more than 20 hurt in more than 15 knife attacks across the country just this month. About 10 Palestinians have been fatally shot by the security forces while they were carrying out, or attempting to carry out, attacks, or after snatching weapons from soldiers or police officers.

The Israeli authorities say they are unable to pre-empt or halt the attacks through intelligence or other means since they are largely being carried out by so-called lone wolves: Palestinian individuals, many of them teenagers, unknown to the security services, apparently acting without the backing of any organization and almost spontaneously.

But the resort to live fire, often with lethal consequences, is increasingly opening Israel up to criticism, placing the government in a quandary.

Earlier Monday, a Palestinian man, Mustafa Khateeb, 18, from another East Jerusalem neighborhood, stabbed a border police officer at the Lion’s Gate entrance to the walled Old City. The officer was wearing a protective vest and was unharmed. Police officers fatally shot the assailant and were later praised by their superiors for their swift response.

Hours later, a Palestinian teenager from East Jerusalem stabbed a police officer near the national Police Headquarters, and the officer shot and wounded her. On Monday night, a Palestinian attacked a soldier with a knife and tried to grab his gun on a bus near Jerusalem’s central bus station. The assailant seized a pistol that a police officer on board dropped during the struggle, the police said; other officers arrived and fatally shot him.

Under domestic pressure, the Israeli government wants to project an iron fist in an effort to deter further attacks and to restore the Israelis’ shattered sense of personal security. Yet human rights groups, Palestinian activists and Arab members of the Israeli Parliament say that at least in some episodes that were caught on video, officers appeared to have acted too aggressively, firing at suspects who did not appear to be presenting any immediate mortal danger, and at times shooting to kill.

Some critics argue that too tough a reaction only pours gasoline on the bonfire, inspiring more attacks and protests that sometimes escalate into deadly clashes. Some of the videos of police shootings have had the added effect of turning the Israelis, in the eyes of some people, from the victims of terrorism into aggressors.

Israeli analysts say there are no easy answers.

“When somebody is standing with a knife, whether a man or woman, and threatens to stab you and your assumption is they intend to kill you, you want to protect yourself,” said Michael Herzog, a retired brigadier general and Israel-based fellow of the Washington Institute for Near East Policy.

“Clearly it is preferable to arrest the perpetrators and bring them to justice,” he said, “but you can’t control it. People are under psychological pressure.” Mr. Herzog added, however, that some cases might warrant further investigation.

Video of the shooting of Fadi Alon, 21, who stabbed and wounded a 15-year-old Jewish boy, Moshe Malka, outside the Old City on Oct. 4, appeared to show Mr. Alon being killed by the police as he was trying to flee from Israeli civilians who were pursuing him, shouting “Shoot him!”

Amnesty International, which has accused Israel of using excessive force, said that killing “appears to have been an extrajudicial execution.”

Ahmad Tibi, an Arab member of Israel’s Parliament, questioned why the police killed Mr. Alon but spared Yishai Schlissel, an ultra-Orthodox Jewish man who stabbed six marchers at a gay pride parade in Jerusalem in July before officers wrestled him to the ground. One of Mr. Schlissel’s victims, a 16-year-old girl, later died of her wounds.

Video of the shooting and wounding of an Arab Israeli woman wielding a knife at a bus station in the northern Israeli town of Afula has also raised doubts about the threat she posed.

The acting national police chief, Bentzi Sau, said open-fire regulations were based on “means and intention.” Noting that the woman in Afula was shot in the lower body, he said that she had been warned to drop the knife but failed to do so, meaning that the forces had to act to “neutralize the threat.”

Mr. Herzog said he had seen the Afula video. “The police panicked. It is hard to judge people in that situation,” he said.

An Israeli resident of Pisgat Zeev, who requested anonymity to avoid the attention of the police, said she had seen the shooting of the young assailant on Monday from a distance of a few meters. Police officers “jumped out of a van and started shooting,” she said. She could not see if the youth was holding a knife, but she said the police had acted too quickly to have given much warning.

“They fired at least 10 shots,” she said. “It’s like the Wild West here. This was overkill.”

And like many Palestinians who are skeptical of Israeli police accounts, relatives of Mr. Khateeb, the suspect from Lion’s Gate, said they found it hard to believe he had done any harm.

“They shot Mustafa for no reason whatsoever, like they have been doing to every other Palestinian lately,” said his aunt, Bakriya al-Khateeb Bakri, 44. “He had plans with my husband to go to Nablus on Thursday, pick up our daughters who study at Al Najah University and buy an entertainment system for his car.”

Al Haq, a Palestinian human rights group, noted that under global standards the use of firearms “is permissible as an absolute last resort” against imminent threat of death or serious injury, and “only when other extreme measures are proven insufficient.”

Sarit Michaeli of the Israeli human rights group Btselem said, “On an immediate level, of course the police have an obligation to protect citizens. But they are expected to do so by using the minimum amount of force.” If necessary, the police could aim to shoot suspects in the leg, she said.

She added that the police were operating in a public climate that encouraged strong, decisive action, pointing to supportive messages from police superiors, politicians and some of the news media.

Jerusalem’s mayor, Nir Barkat, who has urged citizens with gun licenses to carry their personal weapons, described the attacks in his city on Monday as “a shocking form of evil.”

He added in a statement, “I would like to commend and thank the security forces, security guards and dedicated citizens who took swift action in all of the recent events, bravely neutralizing terrorists and stopping killing sprees.”

Yair Lapid, the leader of the centrist Yesh Atid party, which currently sits in the opposition, visited Lion’s Gate on Monday. Of the police response to the attempted stabbing that morning he said: “That should be the operating model. Whoever comes at us with a knife needs to know that they will be shot.”