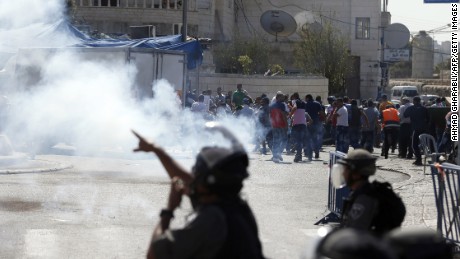 Israeli authorities reported five knife attacks Saturday, all of them at the hands of Palestinians, as the spate of violence afflicting the two sides continued into the weekend.

According to Israeli Defense Forces, three of the attacks occurred in Hebron, one in Jerusalem and one in Qalandia. None of them were fatal, at least for the person stabbed; IDF said the Palestinian assailants in four of the five incidents were shot and killed.

But the official Palestinian version of events doesn’t always match the account given by Israeli authorities.

Saturday’s incidents, as reported by both sides:

Three of Saturday’s stabbings occurred in the West Bank city of Hebron.

In the first, a Palestinian tried to stab an Israeli pedestrian, but according to the Israel Defense Forces, the armed civilian shot the assailant dead.

WAFA, the official Palestinian news agency, reported the incident as a shooting death of a Palestinian teenager, it did not mention a knife.

According to WAFA, 18-year-old Fadhil Qawasmi was killed by a Jewish settler as he walked down the street. The settler pursued and harassed Qawasmi before shooting him dead as the teen tried to walk away, the news agency said.

Qawasmi was shot four times and “left to die by Israeli soldiers who prevented paramedics from administering medical assistance to him,” according to WAFA.

In a second incident in Hebron, a Palestinian woman stabbed an Israeli border policewoman at the Ashmoret Yitzhak Border Police base, according to Israeli police. The border policewoman shot and killed the suspect. The officer was lightly wounded.

WAFA reported on this incident too, including allegations the woman carried out a stabbing, but the Palestinian news agency also included this caveat: “To be noted, Israeli police and army forces often resort to fatally shooting Palestinians — who are involved in alleged attacks against Israelis — while making no effort to apprehend them.”

In a third Hebron attack, a Palestinian assailant stabbed an Israeli soldier, leaving him with “moderate penetration wounds (in) his upper torso,” according to Magen David Adom, Israel’s national EMS agency. Both Magen David Adom and IDF said that the attacker, identified by the Israel Security Agency as 16-year-old Tareq Ziad Naaman Natshe, was shot and taken along with the soldier to a Jerusalem hospital. Natshe’s condition was unknown Saturday.

CNN has seen no reports of this incident from Palestinian sources.

In the incident that unfolded in Jerusalem, which was the second of the five to occur, Israeli border police officers approached a Palestinian man in the city’s Armon Hanatsiv neighborhood to conduct a check when the man pulled a knife and tried to them, according to Israeli police spokeswoman Luba Samri.

WAFA, however, casts the incident in a different light.

It reports 16-year-old Mutez Awaysat was shot and killed by Israeli soldiers at short range, and quickly cordoned off the area to prevent journalists from the scene in “the illegal Israeli settlement.”

The fifth stabbing on Saturday occurred at a border checkpoint in Qalandia. According to IDF, an assailant attempted to stab a policeman but the knife did not penetrate the officer’s flak jacket, prompting the officer to fire upon and wound his assailant. When an Israeli solider then inspected the suspect, he pulled out a second knife out and tried to stab him, but was shot and killed before he could inflict any damage, IDF said.

Seven Israelis have been killed since October 1 in attacks by Palestinians with knives, guns and cars, according to Israeli officials.

Distinct from that, protesters have also rioted in Palestinian territories, many throwing rocks, and at times Israeli security forces have used live ammunition.

Five Palestinians were killed Friday in clashes with Israeli forces in the West Bank and Gaza, according to the Palestinian Ministry of Health.

They and four deaths Saturday are among 44 Palestinians killed this month in Jerusalem, Gaza and the West Bank, health ministry spokesman Osama al-Najjar told CNN. This figure includes those killed after carrying out attacks.

This is in addition to the more than 1,770 injured by live fire or rubber bullets in the same time period, according to al-Najjar.