The post included a photo of Assad with a wide smile shaking hands with Putin. Russian television showed footage of Putin and Russia’s foreign and defense ministers meeting with Assad and his adviser.

Putin thanked Assad for “accepting our invitation and coming to Moscow despite a tragic situation in your country.”

Assad praised Russia’s anti-terror efforts since the beginning of his country’s war. “Terrorism which we see spreading today could have been more widespread and more harmful if it weren’t for your decisions and steps, not only in our region,” Assad said in remarks carried by Arab media.

As CBS News correspondent Mark Phillips reports, the visit was a clear sign of who’s now running the show on the government side of the Syrian conflict, and it was a lot more than a simply courtesy call paid by Assad as Putin’s jets have effectively become the Syrian air force.

The photos show the beleaguered Syrian leader smiling as he hasn’t smiled in years.

It was the embattled Syrian leader’s first known trip abroad since 2011. Syria’s conflict began in March 2001 after the government reacted with a violent crackdown to largely peaceful protests against Assad’s rule. The protests gradually became an armed insurgency and a civil war that has killed a quarter of a million people in the past five years.

Russia began launching airstrikes against insurgents in Syria on Sept. 30, saying it was fighting the Islamic State of Syria and Iraq (ISIS). Many of the strikes carried out by Moscow have not targeted ISIS, but other opposition groups — including some backed by the U.S. government.

The Russian president hailed the Syrians for standing up to the virtually alone, but Phillips notes Assad’s troops have never been on their own, enjoying direct support from the Iranians and allies from the militant Shiite group Hezbollah in Lebanon.

There are mounting concerns that Russia’s new aerial role in the conflict could serve only to prolong he war, rather than bring it closer to an end, as it is helping to prop up the Assad regime which had been losing ground fast to opposition groups.

Of course, the Russian strikes also put Russian planes into airspace the U.S. has been using in its ongoing bombing campaign against ISIS. 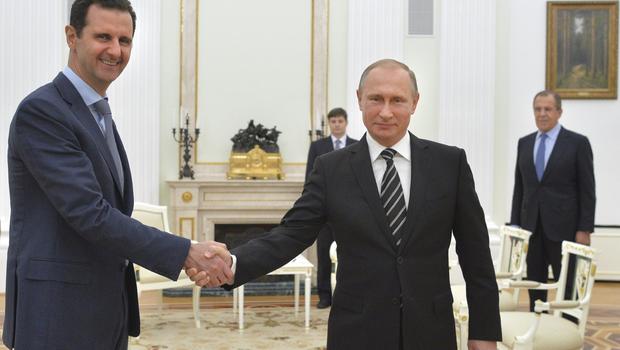 On Tuesday, the U.S. and Russia signed a memorandum of understanding over safety procedures for aircraft flying over Syria. The memo includes specific protocols for air crews to follow over Syria, and establishes a ground communications link.

After the meeting with Putin, the Syrian presidency quoted Assad as calling “terrorism… an obstacle to a political solution.” The Syrian regime refers to all opposition groups fighting on the ground as “terrorists,” including the more moderate groups backed by the U.S. and its allies.

Putin added that along with fighting militants, Moscow believes that “a long-term settlement can only be achieved as part of a political process with the participation of all political forces, ethnic and religious groups.

“The Syrian people have been putting up a fight against international terrorism effectively on its own for several years, sustaining sizeable losses but it has achieved positive results recently,” Putin said.