ropical Storm Koppu is heading away from the Philippines’ main island of Luzon, leaving behind a trail of devastation in the country’s crucial farming region. 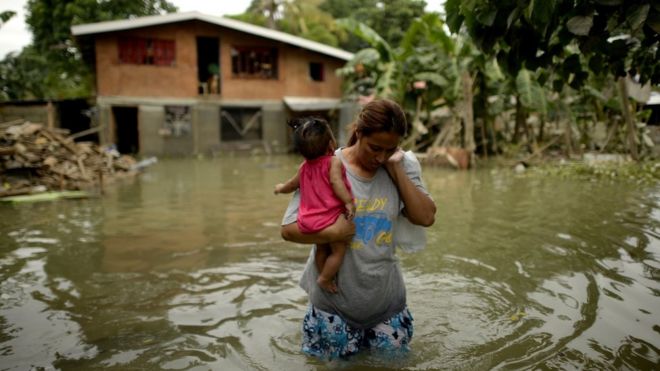 At least 39 people were killed as heavy rains triggered flooding and landslips, and toppled walls and trees.

The government is holding an emergency meeting to decide whether additional rice imports will be needed.

The meeting had already been scheduled for next week to try to prepare for drought which predictions suggest could be induced by the El Nino severe weather system.

But an official from The National Food Authority (NFA) told Reuters news agency the meeting would be held this week, after some 400,000 tonnes of paddy rice was destroyed by Koppu.

Koppu is now over the Balintang channel north-west of Luzon and has weakened to a tropical depression, the disaster management agency said, and the weather is improving.

However, the storm dumped some 130cm (4ft 3in) of rain which is still subsiding and tens of thousands of people remain in shelters – some with no remaining homes to return to.

Disasters management spokesperson Romina Marasigan told the press 194,387 families or 907,267 persons had been affected by the typhoon.

The official death toll stands at 26, but officials told Associated Press news agency that 39 people had died, while a tally conducted by AFP suggests the number is 47.

In the Luzon farming region, flooding took many lives, while landslides claimed more in mountainous areas.

The disaster agency has estimated the value of the damage to agriculture and infrastructure at 6.6bn Philippine pesos ($141m; £92m).

Koppu is the second strongest of 12 storms to hit the archipelago this year.

In 2013, Typhoon Haiyan tore through the Philippines, causing major destruction and leaving more than 7,300 people dead or missing.

Cheetahs are Rapidly Becoming Extinct as the Cub Trade Thrives

‘If They Die, We All Die’: Drought Kills in Kenya

Three Responses to Grief in the Philosophy of Kierkegaard, Heidegger, and Camus