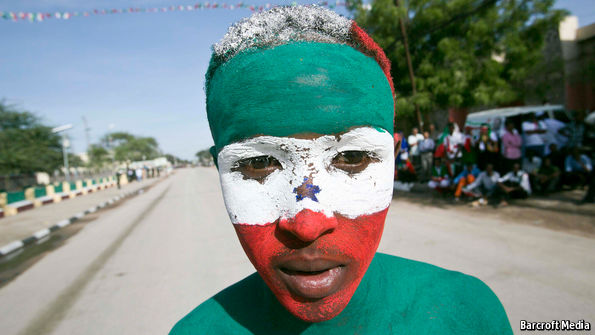 SOMALILAND, a slim slice of Somali-inhabited territory on the southern shore of the Gulf of Aden, ticks almost all the boxes of statehood. It has its own currency, a reasonably effective bureaucracy and a trained army and police force. The government, located in the capital city of Hargeisa, maintains a respectable degree of control over its territory: the country is, by and large, peaceful, in stark contrast to Somalia to the south—where bombings and a rampage through a popular hotel in the capital killed at least 14 people at the weekend. Somaliland enters into legal contracts (signing, for example, oil-exploration licences with foreign corporations), and it engages in diplomatic operations with the United Nations, the Arab League, the European Union and nations such as Britain, America, and Denmark. But it has yet to receive official recognition from a single foreign government in the years since it declared independence in 1991. To the outside world, it is an autonomous region of Somalia, subject to the Somali Federal Government (SFG) in Mogadishu. Why is it not a state?

Throughout the post-independence era, geopolitics in Africa has tended to respect “colonial borders”, ie the borders laid down by European colonial powers in the 19th century. Across the continent, there have been only two significant alterations to the colonial map since the 1960s: the division of Eritrea from Ethiopia, in 1993; and South Sudan from Sudan, in 2011. On the question of Somaliland, the African Union (AU), to whom the international community tends to defer on boundary issues, has stuck to its traditional line: to recognise Somiliand would be to open a Pandora’s box of separatist claims in the region. Only with the consent of greater Somalia should Somaliland be granted independence, so the argument goes. But this, Somilalanders point out, is inconsistent: Somaliland, unlike Somalia, sticks to old colonial borders. It even has previous experience of statehood (prior to independence, the territory was administered as a separate British colony, and briefly enjoyed a five-day spell as a sovereign state). Formerly British Somaliland’s union with Italian Somaliland to its south, which brought about modern Somalia in 1960, was voluntary, they argue. Its independence should require merely divorce, not reinvention.

Although the AU itself admitted as much in 2005, Somaliland’s claim remains in limbo. The reason for this lies in and around Mogadishu. Somalia’s civil war has raged for two and a half decades, and despite the introduction of a new constitution in 2012, the SFG’s claim to territorial authority is precarious. Many fear that the apparent creation of a new state in the region, whose presence would almost certainly embolden Somalia’s other secessionist provinces (Puntland, Jubbaland and Hiranland), would lead to the balkanisation of Somalia along clan lines, while simultaneously reigniting old regional tensions (between Somalis and Ethiopians, for example). Moreover, by crimping the power of the federal government in Mogadishu, which is loth to accept anything less than a united Somali state, it could trigger a resumption of hostilities between north and south, rendering peace negotiations, which have been going on for years, nearly impossible. This, for Somalia’s neighbours as well as the international community, is the doomsday scenario. Many argue something similar can be seen playing out in South Sudan today.

Compared to the lobby for an independent South Sudan, which was highly vocal in America’s Congress and elsewhere, the cheerleaders for Somaliland’s independence maintain a relatively low profile. They exist, of course: there are a surprising number of city councils in the UK, such as Cardiff, that claim to have recognised Somaliland on their own. But, for now at least, proper state-to-state recognition remains a pipe dream. For as long as Somaliland’s “parent” nation remains the Horn of Africa’s primary security concern, the case for statehood will fall on deaf ears.