Communities struggle with the cultural and financial challenges of mental illness, and in under-resourced private clinics, patients are routinely chained.

Amina usually takes her brother to the clinic by force. He doesn’t like going. “I feel very bad when I take him there. I have to do it but I cry at the same time,” says the young mother who lives in downtown Hargeisa, capital of the breakaway republic of Somaliland.

“We have no choice but to take him. What else can we do for him?” Amina* adds, visibly pained.

Her 38-year-old brother Bulhan* has on four occasions been admitted to the Macruuf Relief Organisation, a privately run mental health clinic in Hargeisa, one of many that have been established in recent years. 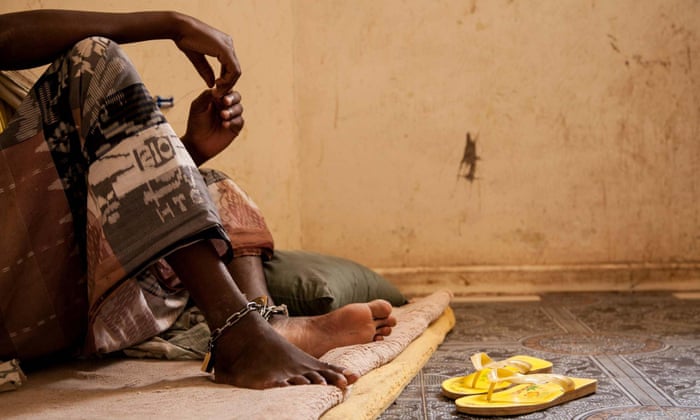 These under-resourced private centres operate largely without scrutiny from the authorities. Chaining patients is common, as is confinement without consent, practices that Human Rights Watch says violate “basic international standards prohibiting ill-treatment, and may constitute torture”.

“If people fight, they are punished, they are chained,” says Bulhan, who is now at home with his family. “They use the chains in different ways. They’ve stopped using this technique now but they used to chain your legs and tie you up on the roof with your head facing down. Now they just chain your legs and tell you to sit somewhere.”

Amina’s dilemma is one that many families in Somaliland face amid a substantial mental health crisis. Many people are ill-informed about psychosocial disorders, which are widely stigmatised in Somali culture.

“There is an explosion of mental illness in this society,” says Abdirisak Mohamed Warsame, mental health project manager for the Italian NGO Gruppo Relazioni Transculturali, and one of just a handful of professionals working in the sector in Somaliland.

“The community has no formal ways to provide for the mentally ill,” he adds. “The government is struggling with other health issues that are more treatable; the ministry of health only recently established a mental health office.”

While there is no official data on the prevalence of psychosocial disorders in Somaliland, a study (pdf) of four regions in 2004 estimated that at least one person in every two households had some form of mental illness.

The problem extends across the whole of Somalia, from which Somaliland declared independence in 1991, although its independence is not formally recognised. A World Health Organisation report (pdf) in 2010 estimated that up to one in three people in Somalia had been affected by some kind of mental illness, a figure that is substantially higher than in other low-income and war-torn countries.

“We are a country that has come from war,” says Warsame. “There is a high rate of poverty and widespread unemployment; also many people chew khat” – a plant with narcotic properties popular in the Horn of Africa and the Middle East.

In Somaliland, there are only two psychiatric doctors for an estimated population of 3.5 million, although more training is taking place.

“Psychiatry is now taught by myself and my colleague as a one semester course as part of general undergraduate medicine,” says Dr Liban Ahmed Hersi, one of the two psychiatric doctors. “Before, tutors would come in for short trips and there was no local supervisor – it was very rushed and difficult to grasp.”

There are only four mental health wards in general hospitals across the country, while in Hargeisa many families rely on the privately run residential centres. Families usually pay $100-$150 (£70-£100) a month to place relatives in the private facilities – there are at least nine in the capital.

Conditions in both the public and private facilities are often poor. Patients sleep several to a room – some of which are highly unsanitary – and activities are nearly non-existent. While the mental health ward in the Hargeisa group hospital is chain-free, patients are chained in most other facilities. Access to drugs is limited and diagnoses are often unclear. Community-based care systems are absent, although some families turn to traditional Islamic healers to try to cure patients.

“Within the community, mentally ill patients in Somaliland face very negative attitudes,” says Hersi. “They are stigmatised, they are humiliated. Children throw stones at them, as well as insults.

“Family caretakers take relatives to various asylums, pay monthly fees and patients are kept there as long as the family wants. Private centres make good money out of this and that is why so many have emerged in recent years,” he says. 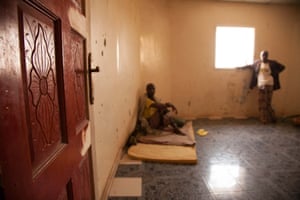 Bulhan’s repeated admissions to Macruuf seem linked to his consumption of khat. “Last time I was there for two months. I was admitted by my family because I was not sleeping, especially when I was chewing khat,” he says.

“The neighbours complain about him when he is unwell because he disturbs them, he throws stones at them and they feel annoyed by that,” says Amina. “He doesn’t hurt me and my children but he disturbs the neighbours, he does strange things sometimes and that is why I take him to the centre.”

She adds: “When he stays outside for a long time, he starts chewing a lot of khat. There, they give him medicines that make him sleep. He is not mad, we only want him to eat well and rest and have a good sleep.”

“There is a belief that mental illness is not curable, that patients won’t get better,” says Hersi. “So they lose their freedom – at home and within the wider community, they are abused, they really suffer greatly.”

* Names have been changed to protect identities