To mark the fifth anniversary of the commencement of construction work on the Renaissance Dam of Ethiopia, an illustrious occasion was held in Hargeisa, on Saturday.

As part of the commemoration process business community members in Somaliland once more dipped into their pockets and flocked to fill out forms pledging differing sums for investment on the project.

Dahabshiil on this occasion came up with US$30 000 more to beef up US$100 000 more it put up for investment on the Dam in 2012. During that earlier occasion, the company donated US$20 000 more as a donation and goodwill gesture to signal its confidence in the health and soundness of the proposed project.

Opening the Saturday occasion at Maansoor, His Excellency the Ethiopian Ambassador to the Republic of Somaliland, Berhe Tesfai, reminisced on the trepidation and doubts both regional and international authorities showed in an idea they termed as ‘grandiose’ and ‘ultra-ambitious’.

“After years of hard work and self-reliance, we have shown the world that dreams can be turned to reality no matter how daunting or ‘grandiose’ they looked on the outside,” Ambassador Tesfai said.

The Ambassador highlighted the many benefits the Dam held not only for Ethiopia but for the whole region on multi-tiered levels such as the overall economy, environment, Fauna and vegetation, Power supply, infrastructure, agriculture, job creation, and so on.

Representing the company, Professor Hassan Heiss, reiterated the company’s confidence in the aggregate output of the project once it is finished and how it would revive business in all its levels in a region that needed an infusion of this kind.

About the Renaissance Dam

The Grand Ethiopian Renaissance Dam , formerly known as the Millennium Dam and sometimes referred to as Hidase Dam, is a gravity dam on the Blue Nile River in Ethiopia currently under construction. It is in the Benishangul-Gumuz Region of Ethiopia, about 15 km (9 mi) east of the border with Sudan.  At 6,000 MW, the dam will be the largest hydroelectric power plant in Africa when completed, as well as the 11th largest in the world sharing the spot with the Krasnoyarsk Dam. The storage reservoir has a surface area of 1561 km² at level of 640 m, i.e. 146 m behind the dam which holds a large volume of water equal to 79 billion m³. According to the Ethiopian government, as of October 2014, the dam is 40% complete.

The Ethiopian government has stated that it intends to fund the entire cost of the dam by itself. It has issued a bond targeted at Ethiopians in the country and abroad to that end. The turbines and associated electrical equipment of the hydropower plants costing about US$1.8 billion are reportedly financed by Chinese banks. This would leave US$3 billion to be financed by the Ethiopian government through other means. The estimated US$4.8 billion construction cost, apparently excluding the cost of power transmission lines, corresponds to less than 15% of Ethiopia’s Gross Domestic Product of US$41.906 billion in 2012. (Wikipedia) 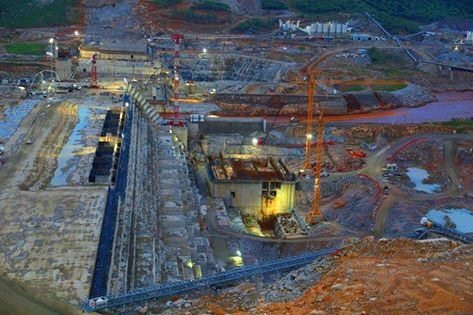