What do you do when death stares at you? Do you run away or face it head on? For many of us we will be cowed in such a scenario and look for a way to escape.

For brave Kenya Defence Force (KDF) soldiers at the El-Adde camp on January 15, they faced death with unflinching bravery.

In the video released by terror group al-Shabaab on Sunday, April 10 which shows how the group overrun the KDF camp and killed several soldiers as well as taking others captive.

The al-Shabaab video was not shot in the first wave of the attack in the camp, but in the second wave as the first occurred at dawn.

In the video, it’s clear the sun is up so the video does not show KDF defended the camp and killed some of the attackers involved.

The video which only shows casualties inflicted to Kenyan troops while for al-Shabaab is well hidden.

The courage of the soldiers is heartbreaking if not inspiring as the captive soldiers were paraded in front of the camera and forced to narrate how their camp was captured.

Some of the KDF soldiers sent messages to their families, with one particular wounded KDF soldier sending a heartwarming message to his little daughter telling her he loved her.

Another KDF soldier who has been wounded with his face heavily bleeding stands as the terrorists surround him.

The soldier who is well built with a tall frame narrates how the camp was overrun in the video and sends  a message to his family telling  them not to expect him back alive. 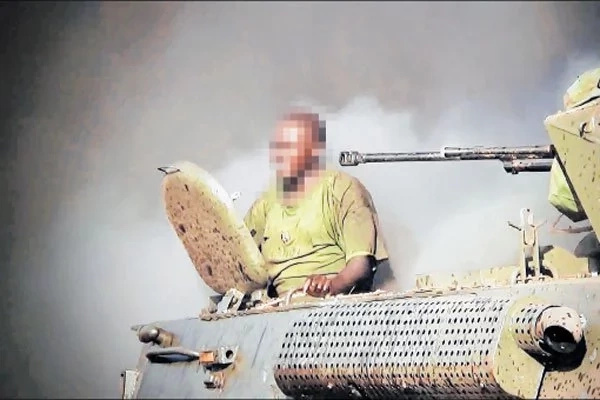 Other captured Kenyan soldiers called on President Uhuru Kenyatta who is the commander in chief of the Armed Forces not forget the families of the dead or captured soldiers instead support them.

In the video, a KDF soldier in an armored vehicle bravely fights dozens of terrorists with his vehicle mowing others before they hit the vehicle with a rocket launcher.

The young soldier who barely looks 30 emerges from the burning vehicle and looking into the faces of his attackers refuses to surrender instead choosing to die in his vehicle.

After a few seconds and sensing the KDF soldier would not bow down, the terrorists shoot him down.

The soldier instead of dropping after the first bullet hits him still stands, its only after several more shots at him does he then falls down into his burning vehicle.

Some of the fighters in the video are seen wearing Ugandan military uniforms.

In the video its said some of the captured Kenyan soldiers who were wounded died from their injuries with others still being held captive.

Media Emery - January 26, 2020
Social media platforms have been becoming an increasingly integrated part of the lives of the Somali people. They have become the number one socializing...
© SomTribune 2016, All Rights Reserved | Designed by SomSite