Until the end of last year, Berlin was leading an engaged and active life inUganda, running successful anti-FGM programmes, competing in freestyle rap competitions and involved in LGBT rights groups. “I was changing a lot of minds,” says the 22-year-old, who prefers to be known by her first name alone. “And then some person tries to mess my life up.”

“One afternoon a friend of mine called me and said we need to talk to you,” she recalls. Berlin’s family were Somalian refugees who had fled to Uganda in 2010. “My friend said, ‘Berlin, we care about you, tell us, are you gay?’ At that moment I felt like something crushed inside of me. I never ever expected this day to come, because I’ve always been careful.”

Berlin took a split second decision and told her friend she was not gay. Outed gay people in Uganda have been the victims of attempted lynching, mob violence and arson. “I was sweating. I almost broke down in front of them,” she says. “I was thinking, this is the point where you need to defend yourself, because they don’t have any proof.” She got out of that situation and hoped she would be safe. But then she started receiving threatening phone calls and text messages.

Berlin contacted a friend in New York to tell him what was going on. She’d met Jason Jeremias, a theatre producer and women’s rights campaigner, when they’d worked on a gender empowerment workshop in the Ugandan capital together and they’d been close since. 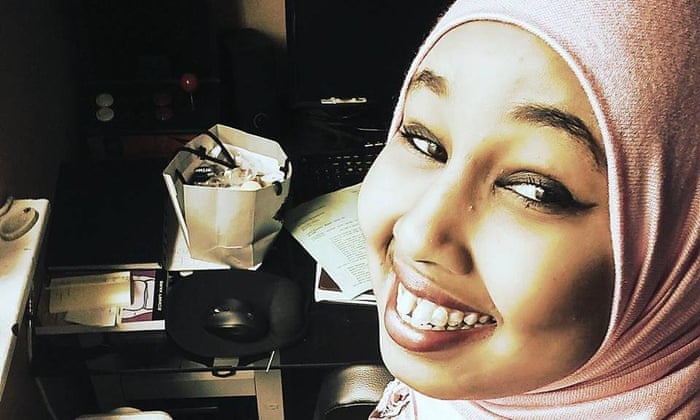 “She’s an incredibly dynamic person both artistically and in her personality,” says Jeremias. “She said ‘I’ve been outed’ and I joked, ‘What are you in MI5 or something?’ She said, ‘No, I’m a lesbian’. I had no clue, and I knew the social reality regarding the LGBT community in Uganda, so I was concerned.”

One evening Berlin was coming home from school when four boys beat her up, leaving her with a black eye and broken teeth. “We told you we’d get you,” they said. “Because the attack was public it became the catalyst for people talking,” says Jeremias. “It just unfolded into a nightmare very quickly.”

A few days after the attack Berlin’s mother called her and asked her to come home. When she got there she found some Somali “uncles” she had never met before. “They said, ‘Berlin, we heard stuff we are not happy with, and we need to take you back to Somalia for prayers’.”

When Berlin told Jeremias she was being taken to Mogadishu he immediately contacted anybody he could think of in NGOs dealing with LGBT issues and women’s issues to try to get her to safety. He told Berlin to fake stomach pains on her lower right side so that she would be taken to a clinic and ask a doctor to help her. She did this but “my mum doesn’t leave my side for a second,” she says. “So that plan fails and the next thing you know I boarded the plane.”

In Mogadishu (Somalia), Berlin thought she was going to be forced into marriage by her family. After she refused, they called her “bigger uncle from the village”. Her younger cousin heard him say “Why are you wasting time, she’s gay. You need to kill this girl.’” When her cousin ran to tell her Berlin says she felt her “feet, hands become cold immediately,” she says. “Then my bigger cousin comes in and grabs my phone.”

Berlin’s phone was her lifeline, via Facebook, to Jeremias. “We had created a password for whenever we talked,” he says. “When I said to her that night ‘What’s up?’ I got this message back saying ‘Hey white boy’ and I knew immediately that wasn’t Berlin. My heart dropped to the floor.”

Jeremias had been trying to arrange Berlin’s escape through contacts in Mogadishu. He was worried that Berlin’s relatives would read back through the messages and discover that they were trying to get her out. Then he was even more frightened by the messages that followed that said “She’s going to die”, “We’re going to get you” and “Everybody’s going to know what’s going to happen”.

Because he works in women’s rights and often hears horrific stories, Jeremias says he was “picturing the absolute worst”. He says now that there’s no way to describe “the responsibility that is thrust upon you in those seconds, but somehow I just kept talking to him [the person using Berlin’s phone].” At one point he tried to reason with the relative saying, “I know this is a family member of yours, and you have to in some place in your heart care about this person. I am speaking to you now as one human being to another. There is no justice in murder.” The man replied, “You are very cool white boy. If she marries, she’s ok, if she doesn’t marry she’s dead.”

Now Jeremias knew that time was running out. “The reality of escaping forced marriage, honour killings and direct violence is that there is a very small window for getting these girls and women out of these situations,” he says.

After many dead leads he eventually made contact with someone who works for the UN and they arranged a plan to get Berlin out of Somalia. They managed to get her another phone through a Somali girl they contacted, who dropped the handset outside Berlin’s house and signalled to her that it was there.

While the men were at the mosque and the women were doing housework, Berlin left the house and got to a car waiting three blocks away. That car drove to another rendezvous point where she had to wait to meet another UN contact. Berlin was wearing a niqab to cover her face but she was getting increasingly nervous as time ticked by. Eventually, a UN official, Amina Mohammed, arrived.

Mohammed took her niqab off when talking to Berlin. “Why would you do that?” Berlin questions later. “The driver stared at her face.” The car took them to a UN building, and when they passed through security Mohammed told Berlin she needed to go home to her child. Berlin later found out that the woman who helped her was murdered soon afterwards. “At that moment I was like everything around me froze,” she says. “The words that she said ‘I need to go to my child’ started coming back to me, and I broke down in tears.”

It’s great that there’s an Emma Watson and an Angelina Jolie out there, but there are women in our time who are heroes

Jeremias is still struggling to come to terms with that tragedy. “I try to tell myself that [the murder] was not [connected to the escape],” he says. “I remember talking to the woman and she was incredibly comforting to Berlin, so it’s hard for me to make sense of her murder. I try to block it out, but then doing that is an injustice to an incredibly brave woman.”

He wasn’t sure about publicly naming Mohammed, but then he reasoned that brave women all over the world rarely receive the respect they deserve for working to end violence against other women. “It’s great that there’s an Emma Watson and an Angelina Jolie out there,” he says. “But there are these women in our time who are incredible heroes. There is a million of them who have been omitted from history. If we’re going to make up for that then we can do that right now by knowing these women’s names. They should be exalted for their efforts.”

Berlin is now living in Toronto with her sister, and is working to fulfil her lifelong dream of becoming a doctor. Around that, she’s going to keep rapping. “I’ve been writing every step of the way,” she says. “My notebook is full of what I’ve gone through. I’m still going to express myself.”

Sadly, Canada hasn’t proved to be the safe haven all involved in her escape had hoped. Just last week Berlin was punched in the face on her way to school after an altercation with some drunk Somali men. “They shouted ‘You think you’re too good for us’ and threw a bottle at me,” she says. She reported the incident to the police but she feels that they have “given up on this community”.

Berlin hasn’t given up, however. She’s joined a group of Somali forced marriage survivors and is planning to work with them “to sensitise, educate, and reduce the violence,” she says. “We’re planning to call the community together and talk about these issues. It’s time to change.”