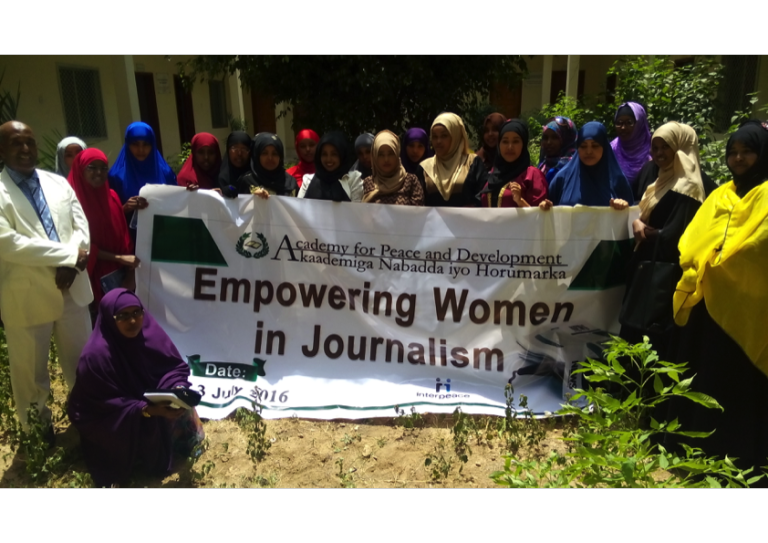 The APD concluded on Thursday a workshop that focused on Conflict Sensitive Reporting, Ethical Interviewing Skills and Effects in Bias/Propaganda.

It’s been a primary focus for the Academy of Peace and Development )APD) to play an instrumental role in buildingthe operational capacity of Somaliland’s media sector. Through various programme activities and more recently by means of APD’s Mobile and Audio Visual Unit (MAVU) – an outreach awareness tool used to inform and relay concerns from isolated communities through mechanisms such as accompanying journalists to duty bearers – there have been multiple workshops and consultative forums to better equip and educate media professionals.

Journalists, who in the past had a difficult or in many cases impossible task of covering communities residing in the most distant locations of Somaliland – away from the tarmac roads – were provided a distinct opportunity to expand their coverage capabilities by joining the APD-MAVU Team during fieldwork. This incorporation of journalists in APD activities, also known as the Journalism Embedment Programme, is a complimentary aspect, which continues to fill the information gap of respective communities.

Indeed, numerous other workshops in the past year have focused on capacity building various components of the nation’s media sector; from subjects ranging from ethical journalism, impartiality, community-based stories among plenty of additional critical areas of significance. As a result of the in-depth relationship between APD and the media as well as the Academy for Peace and Development unwavering commitment to strengthening the media sector, a workshop on ‘Conflict Sensitive Reporting and Ethical Interviewing Skills’ for 40 women journalists representing all mass communication forms such as print; television; radio and online were in attendance. Moreover, women journalist students of different journalism schools and senior management staff from Women In Journalism Association (WIJA), also participated in the workshop.

“You have the power to ignite a fire or resolve the conflict through your work. You hold the torch of peace or spear of conflict; it’s your obligation to report the truth but it’s not your job to further fuel a conflict with partial motives. So, today, we shall empower our women journalists with the knowledge and information on how you can fulfill expectations and remain dedicated to national stability”, stated Abdihakim Mohamed ‘Shirwa’ during his course presentation.

Somaliland, although considered a beacon of hope and template of progress in the Horn of Africa, is still developing in light of the many constraints posed by a lack of international recognition. The media is recognized as an integral part of national development; and so, at times of conflict, it’s imperative that journalists understand and fully comprehend their role as mediators and not instigators. Therefore, the APD Workshop on Conflict Sensitive Reporting, Ethical Interviewing skills and Effects in Bias and Propaganda related standard reporting aimed to educate, inform and provide a platform for constructive dialogue among stakeholders on the most effective manner in which all professionals adopt conflict sensitive reporting as the only work ethic.

“APD is committed to remaining a key partner of the media sector in supporting women journalist. We, as in the past, remain confident that this workshop will benefit all of you; the fact is that to ensure peace and stability continues- the media sectors must be encouraged by portraying women journalist in unique and powerful roles as they bear equal responsibility in genuine peace building”, stated APD Executive Director, Mohamed Farah.

The workshop, unlike others in the past, was solely intended for women journalists. In hopes of further empowering women journalists, in a male dominated field, the APD’s vision is to hold prospective initiatives for women confronted with an uphill battle due to social/traditional norms.