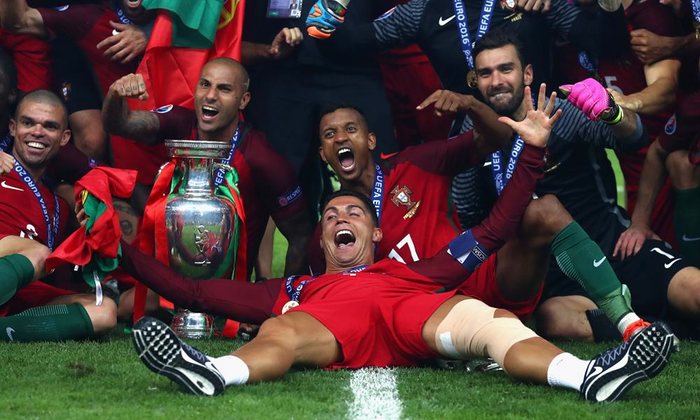 Portugal were worthy winners, and uplifting ones too, as when it mattered most their opponents were unable to stutter up out of second gear. At the final whistle in Paris, as Portugal’s players danced and hugged, a team of real heart and craft, the image of Michel Platini appeared on the huge screen attached to the Stade de France’s halo-like roof.

“Merci pour tout, Michel,” scrolled the message underneath as the French crowd suddenly broke into a chorus of whistles at the man who awarded France this tournament, who as a skinny-legged creative conductor helped define these modern championships, but who is now banned from all football-related activities.

In which case Platini would have been fine with long stretches of this match. This wasn’t the final, or the winning team, most people will have wanted. It was, though, a match that revealed both France’s limitations, and the qualities of the new European champions as Portugal dug their gnarled fingernails into this final from the start and France simply congealed in the lights.

It has been an oddly nuanced four weeks for the hosts as these championships have rolled on. The team had begun to grow into their role as hosts and front-runners. But the country was, it seemed, never quite gripped, always willing but slightly wary hosts. Paris had finally stirred a little on the day of the final, the quiet Sunday streets dotted with flags and face-paint and horn-parping flâneurs. And yet in the end France produced a performance in keeping with the tournament generally: cagey, room temperature and lacking in peaks of extreme quality. Their most celebrated players failed to make any mark on this game. Paul Pogba was a huge disappointment, not least to himself. He passed neatly, but seemed a little lost, all his best qualities subsumed into an eager but slightly unconvincing impression of a passing central midfielder.

Here Pogba spent the last half-hour in a state of visible distress. Stabbing the ball out for a corner after a series of pointless jinks, he let out an huge roar and slapped himself on the cheek. In the aftermath of Portugal’s winning goal he screamed at his team-mates, communicating only panic. Pogba had a poor match, but he was also in a role that seemed to dull his one really outstanding quality, the ability to surge and play with abandon. France had the players to win this match, but not the style, with a clogged and knotted midfield that has never been properly untangled by Didier Deschamps.

The game’s only goal was a lovely moment. Éder scored it, a 28-year old with six goals last season and three in 28 games over a seven-year international career before this. And yet it was Éder, not Pierre‑André Gignac or Olivier Giroud, who played without fear here, an eager, gangling goal-octopus putting himself about with real aggression.

Deep into extra time Éder took the ball 25 yards out, draw back his slender right leg and spanked a low shot into the corner past Hugo Lloris, a brilliantly sweet connection. Portugal’s entire staff and players came hurtling out to bob and huddle on the pitch like a giant woodlouse, shedding bibs and bits of kit, the wonderfully stern Fernando Santos dancing wildly, gripped with an impossible joy.

France’s inability to stutter up out of second gear will demand an inquest. Here’s one: they just weren’t good enough. At times it almost felt as though Cristiano Ronaldo going off had sucked the urgency out of them rather than Portugal, France assuming the game was going to simply collapse into their arms in his absence.

Instead Ronaldo was an oddly effective absence. With eight minutes gone he had his left knee jarred by a bruising challenge from Payet, more over-eagerness than malice, but thumping into Ronaldo’s planted foot. Ronaldo struggled on then struggled off.

At which point France simply failed to ignite. Antoine Griezmann was expertly covered by Pepe. France had no other spark to turn to. For a while Moussa Sissoko was in bullocking form, three times lifting his head and simply stampeding through the challenges towards goal in rugby league style, hands grappling helplessly at his shirt, nudges and niggles brushed aside. But he is, in the end, still Moussa Sissoko.

Above all France seemed to have no real attacking pattern, no idea of how exactly to stretch that thick red membrane. Dimitri Payet has been marginalised in the last few games, but then charge forward and ask questions later isn’t really Payet’s game. Again here he chased, waited for a pass, tried to tap his beefier colleagues on the shoulder now and then.

Finals are there to be won, not nagged away at or taken by default. Here France sat and waited and came up short. At the end Platini seemed an apt if unwelcome intrusion, his disgrace just another strand in the ragged, inglorious buildup to this tournament. It had been generally assumed a France win would make emotional sense, might provide some kind of catharsis for the struggles of the last eight months.

Sport, though, often has its own idea what the story is. And the fact is Portugal were worthy winners, and indeed uplifting ones too, a genuine underdog tale for this nation of 10 million people. The idea this team are a one-man Ronaldo-vehicle, some vanity project for the world’s best-paid sporting yacht-lurker, has always been a little bizarre. Portugal’s one outstanding quality is not their captain but their spirit, which came into the light here, a fitting and indeed quietly admirable end.