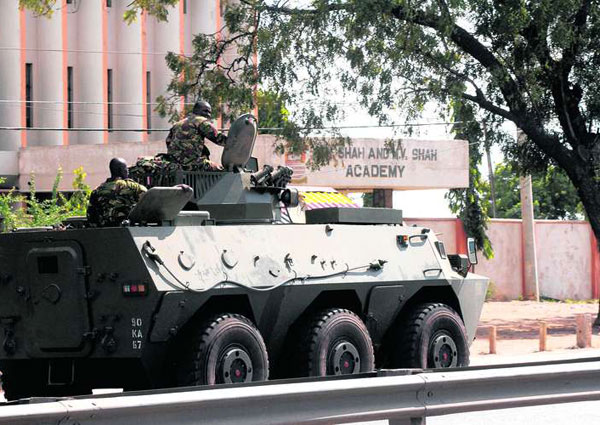 A suspected al-Shabaab militant was killed and several others injured in an attack on an AP camp in Mangai, Lamu county, on Thursday.

Police said a group of armed gunmen raided the camp at about 3 am but were driven away prompting an exchange of fire. They said those injured escaped.

The terror group linked to al-Qaeda has carried out several attacks in Mandera and Lamu over the past weeks, targeting police officers and civilians.

Heavily armed al Shabaab militia were spotted in the county about a week ago.

Last Sunday morning, they resorted to shooting at a KDF soldiers’ convoy when none of the vehicles ran over an IED they had planted.

The troops, whose number was unknown, were manning an Operation Linda Boni zone at Baure in Lamu East.

The Kenya Defence Forces has been carrying out operations to flush al Shabaab terrorists out of Boni Forest in Lamu.

On June 29, at least 20 soldiers escaped death after a lorry they were travelling in drove past an IED planted by al Shabaab.

The incident took place about five kilometres from Milimani were four militants were killed on June 29.

As Virus Resurges in Africa, Doctors Fear the Worst Is Yet to Come

Is Erdogan’s Waltz with Africa About to End?