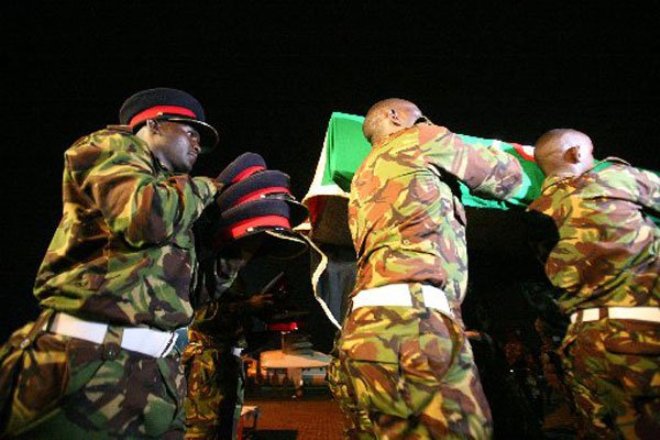 “The underlying problem was the KDF’s poor operational setup and procedures at El Adde,” the report asserts.

Several shortcomings on the part of the Kenya Defence Forces (KDF) and the African Union Mission in Somalia account for the heavy losses suffered in the attack on the KDF base at El Adde early this year, states a report issued on Wednesday by a New York-based think tank.

“The underlying problem was the KDF’s poor operational setup and procedures at El Adde,” the report asserts.

It places equal weight on Amisom’s decision to deploy a relatively small number of Kenyan troops —probably fewer than 200 — in a remote part of Somalia “where al-Shabaab retained considerable freedom of movement.”

The El Adde forward operating base was also poorly designed for defensive purposes, says the study published by the International Peace Institute and written by Prof Paul Williams, a security policy specialist at a university in Washington DC.

More than one kilometre long and nearly one kilometre wide, the El Adde base was “much too big for a company-plus formation to adequately defend,” the report finds.

It further notes that Amisom “has lacked the engineering capabilities to provide more sophisticated defences for its troops in forward operating bases like El Adde.”

Shabaab’s targeting of Amisom supply routes has made it “extremely difficult” for Amisom to deploy even its limited engineering units in remote locations, the report adds.

Communications problems and insufficient military resources may have contributed to the large, but still unspecified, Kenyan death toll, Prof Williams suggests in his 12-page analysis.

The KDF’s El Adde base was in an Amisom sector under Ethiopian command, and the closest Amisom base, about 50 kilometres away, was garrisoned by Ethiopian soldiers, the report notes.

“Amisom troop-contributing countries had a long history of struggling to coordinate their actions,” Prof Williams observes.

At the time of the January 15 raid, he adds, Amisom also lacked military helicopters that might have been able to repulse the attack.

These limitations were made worse by Shabaab’s destruction of the local telecommunications tower just prior to the attack.

The loss of this asset “would not have been a problem if Amisom had had a secure military communications system, but it did not,” Prof Williams observes.

As a result, the George Washington University scholar continues, the initial attempts to rescue the besieged KDF contingent were undertaken not by the closest Amisom forces but by KDF troops based at Mandera, Elwak, and Wajir across the border in Kenya.

Amisom may have already learned some lessons from the decimation of the KDF force at El Adde, Prof Williams surmises.

He notes that a similar Shabaab attack on an Ethiopian base at Halgan last month was beaten back — “not least because the Ethiopian defenders received rapid support from some of their national helicopter gunships and UN utility helicopters.”

“The apparently poor state of the relationship between the KDF forces at El Adde and the local population” may have also contributed to the disastrous outcome, Prof Williams speculates. Kenyan troops seemingly lacked adequate intelligence on Shabaab’s movements, he notes.

Strains between the Kenyans and the elders of the Marehan clan, who are dominant in the area, were “not simply the fault of the commanding officer in El Adde,” the report cautions.

“Furthermore,” he adds, “some people in the Gedo region were angry with the KDF because Kenyan jets had regularly bombed some rural communities they mistook for Al-Shabaab forces.”

The International Peace Institute’s “issue brief” laments the Kenyan government’s continued silence in regard to the number of KDF soldiers killed or possibly taken hostage at El Adde.

Kenyan authorities had promised a few days after the attack seven months ago that they would provide a full and frank account of what happened at El Adde. But this has not occurred, Prof Williams points out.

The reluctance to reveal casualty figures may reflect Amisom’s policy more than Kenya’s, he suggests.

“When Kenyan peacekeepers have died during deployment in UN peacekeeping operations, for example, they are all publicly recognised,” the report says, noting that a total of 58 Kenyans are reported to have been killed while serving as UN peacekeepers.

It thus “seems strange,” the report adds, not to recognise those peacekeepers killed while performing tasks mandated by the United Nations Security Council and the African Union.

“Yet neither the Security Council nor the AU appear to have asked, let alone pressured, Amisom’s troop-contributing countries to publicly declare their dead,” Prof Williams writes.

He notes that officials familiar with the recovery operations at El Adde recently told CNN investigation that “at least 141” Kenyan soldiers were killed there.

“Secrecy hands Al-Shabaab a propaganda victory by allowing its narratives (and videos) to go uncontested and shape the dominant narrative of the event,” Prof Williams argues.