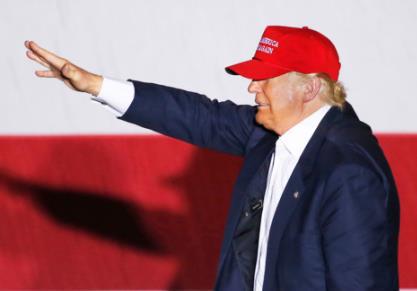 A spectre is haunting America- the spectre of Trumpism.

Trump attacked Hillary Clinton as “weak, ineffective, pandering, and as proven by her recent email scandal, which was an embarrassment not only to her, but to the entire nation as a whole, she’s either a liar or grossly incompetent.  One or the other. Very simple. Personally, it’s probably both.

I have heard the “law and order” trope (dog whistle) many times before.

Senator Barry Goldwater introduced the phrase in his 1964 nomination acceptance  speech:  “We Republicans seek a government that attends to its inherent responsibilities of maintaining … and enforcing law and order.”

In his 1968 acceptance  speech, Richard Nixon contextualized the phrase:

When the nation with the greatest tradition of the rule of law is plagued by unprecedented lawlessness; When a nation that has been known for a century for equality of opportunity is torn by unprecedented racial violence; and when the President of the United States cannot travel abroad or to any major city at home without fear of a hostile demonstration — then it’s time for new leadership for the United States of America… And to those who say that law and order is the code word for racism, there and here is a reply:  Our goal is justice for every American. If we are to have respect for law in America, we must have laws that deserve respect.

Ronald Reagan also stressed the theme of law and order in his 1964 speech.

After Reagan became president in 1981, the “law” became appointment of tough conservative judges and “order” became more prisons. The number of prisoners tripled from 500,000 in 1980 to 1.5 million in 1994.

When Trump talks about “law and order”, what does he mean exactly?

When Trump says “Make America Great”, what does he mean exactly?

Who is responsible for making America not-so-great such that Trump is needed to make America great, again? Those who flout “law and order”?

Trump subsequently said he expects more racial confrontations during the summer: “It’s time for our hostility against our police, and against all members of law enforcement, to end, and end immediately, right now… I mean, you were having big, big trouble in many cities. And I think that might be just the beginning for this summer.”

I find it disturbing that Trump should use the tired old “law and order” dog whistle after the murder of 5 police officers and wounding of 7 others.

I find it disturbing because that phrase has  often been used to spread fear and smear about African Americans as criminals who must be subdued only through crushing police power.

But I consider Trump’s use of the “law and order” in the context of Trump’s other racially, ethnically and religiously inflammatory statements.

Trump has promised to ban all Muslims from entering the U.S. if he became president.

Trump has promised to build a wall to keep Mexicans out, many of whom he considered rapists and violent criminals, “and some, I assume, are good people.”

A little over a week ago, Trump tweeted a reprehensible graphic aimed at demonizing Hillary Clinton by insulting, caricaturing and stereotyping an entire religious group.

Next week, Donald Trump will be coronated as the official presidential candidate of the Republican Party.

The spectre of Trumpism haunting America

Four score and four years ago, Trumpism by another name took power in Germany under the banner of a crooked cross called “Hakenkreuz” (swastika).  The Hakenkreuz symbolized the rise of the Übermensch (the Aryan superman).

“Four score and seven years ago our fathers brought forth on this continent, a new nation, conceived in Liberty, and dedicated to the proposition that all men are created equal,” proclaimed Abraham Lincoln in his Gettysburg Address. The slaves became free.

In 2016, neo-fascism is raising its ugly head and wagging its forked tongue spitting out the venom of racism, xenophobia, sexism, misogyny, alarmism, atavism and antisemitism in America.

In my December 2015 commentary, I voiced my deep consternation over the “Rise of the Trump-aryans!” and Donald Trump’s rhetorical exhortations to “make America great” by creating the Aryan State of Trump or Trump-aryana.

Now, seven months later, my alarm has morphed into total horror as Donald Trump becomes the official presidential nominee of the “Republican Party”  this weekend.

I confess I do not know which republicans in the Republican Party Trump represents.

If the “Republican Party” Trump purports to represent is the Party of Abe Lincoln, I can only say, “Abe Lincoln is rolling in his grave with Trump at the helm of the party he helped establish.”  (Is it possible that Trump could be the end of the Republican Party as Lincoln was its beginning?)

If the “Republican Party” Trump purports to represent is the party of conservatives, then Trump could not possibly be that type of republican because he has total contempt for conservatism and conservative values. Trump presents himself as the anti-establishment republican with his vulgar populism and protectionism and ambitions to patch together white working class democrats and disaffected republicans to capture the White House.

Many stalwart establishment-Republicans have repudiated the anti-establishment republican Trump.

Mitt Romney, the 2012 Republican presidential candidate, recently said a Trump presidency would mean “trickle down racism and trickle down bigotry and trickle down misogyny — all of these things are extraordinarily dangerous to the heart and character of America.”

Right on cue, Trump tweeted his bigotry in a picture depicting Hillary Clinton with a large six-pointed Jewish Star of David against a backdrop of $100 bills with the words “most corrupt candidate ever.”

Trump’s twitter depiction of Hillary was straight out of the RMVP (Reich (NAZI) Ministry of Public Enlightenment and Propaganda).

It was totally outrageous.

In Nazi Germany, Jewish people were forced to wear images of the Star of David to identify themselves as Untermeschen (sub-humans).

The Nazis propagated the most vicious and wicked lies and caricatures  about Jews using insidious cultural and political images and stereotypes. Jews were depicted as an “alien race” that “sucked the blood” of the German (Aryan) nation, poisoned its culture, dominated its economy and exploited and controlled the society.

The Nazis used posters[1], newspapers, films and radio programs to demonize, dehumanize and propagate venomous lies. The fact was Jewish ghettos throughout Europe during and prior to WW II were places of abject poverty.

Soon enough, the Nazis added to their disapproved list of  Untermenschen Roma (Gypsies), gays, Jehovah’s Witnesses, and others they considered physically and mentally disabled  persons unfit to live in the Aryan vaterland (fatherland).

In September 1935, the Nazis enacted their Reich Citizenship Law stripping Jews of their German citizenship and creating “Reich citizens” (with full political rights) and “nationals” who are mere subjects without rights.

There are only two differences between Nazism and Trumpism.

The Nazis promoted an ideology of  “Lebensraum” (living space) in which they justified waging wars of national territorial expansion into Eastern Europe and beyond as a national existential necessity for the physical and moral well-being of the German people.

Donald Trump wants to build a wall to protect the American vaterland from the Mexican and other Untermenschen of the world.

Trump wants to deport, expel, intern or drive out and use any means necessary to cleanse Trump-aryana from the Untermenschen of Mexico, Latin America, Africa and Asia. Ethnic cleansing in Trump-aryana?!

I have no idea what the second difference is between Trumpism and Nazism.

When Nazism was on the rise in the 1920s, “American [journalists] meeting Hitler [were] saying, ‘This guy is a clown. He’s like a caricature of himself.’ And a lot of them went through this whole litany about how even if Hitler got into a position of power, other German politicians would somehow be able to control him. A lot of German politicians believed this themselves.”

Less than a year ago, the political pundits said the Republican Party was using Trump “as a clown to attract more voters for GOP.” Trump was the butt of all jokes, “It is possible to take him seriously and also remember he’s a clown. Yes, he’s a dangerous clown. He’s a clown with a knife, but at the end of the day, he’s still a f–ing clown.”

It is said those who do not learn from history are doomed to repeat it. Benito Mussolini and Adolf Hitler came to power through elections. Those who champion American democracy, with all of its imperfections, should take serious lesson in the way they exercise their democratic rights in choosing  their next president.

The Nazis seized power through a nationalist propaganda of making Germany “great” and Germany “first” and redeeming Germany from the humiliation of WW I. They appealed to a population that was economically and psychologically devastated in its WW I defeat.

Trump’s propaganda theme and his vision of “making America great” and redemption of American global hegemony feeds on global conspiracies and exploitation of  discontent and anger of those who feel marginalized and impoverished by local and international forces.

Is there a lesson in Trump’s triumphalism for immigrants making their home in America.

What do the Untermenschen immigrants in America think Donald Trump will do to them after he says, “I, Donald Trump, do solemnly swear…”?

In the first 100 days, Trump will begin construction of a wall and watchtowers between the U.S. and Mexico. He has made his position on Mexico and Mexicans crystal clear. They are rapists and criminals “and some, I assume, are good people,” said Trump.

In the first 100 days, Trump will issue an executive order for the “total and complete shutdown” of  Muslims from entering the U.S.

In the first 100 days, trump will “rip up” all existing free trade agreements and declare a trade war on China.

In the first 100 days, Trump will repeal Obama’s Affordable Care Act because it has been a “total disaster”.

In the first 100 days, Trump will impose “law and order”.

But who, including Trump, knows?

Trump said, “When I’m president, I’m a different person. I can be the most politically correct person you’ve ever seen.”

Donald Trump believes he can mobilize disaffected White voters  by exploiting their fears and prejudices. He believes all Whites are closet racists and that he can awaken some sort of latent racism in them on November 8, 2016 and  have them deliver to him the White House on a silver platter.

Trump’s strategy is to stoke the anger of certain white voters so that they will come out in massive numbers to vote for him and offset the demographic shifts in the United States that have handed Democrats electoral victories in the last two presidential elections. He thinks he can best accomplish that by spreading fear and loathing (Islamophobia) against Muslims and undocumented immigrants (xenophobia) and exploiting the racial fault line.

The so-called establishment Republicans who underestimated “Bozo the Clown Donald” and remained silent as he rose to capture their Party’s nomination have learned a hard lesson: Clown with a “clown” at your own peril.

Immigrant Americans who underestimate the “clown” will be clowning with their own future.

“Now is the time for all good men and women to come to the aid of their country.”

[1] Nazi WWII German-produced Russian Anti-Semetic propaganda poster. Poster reads: “Jews – A People of Contagion” with a Jewish stereotype-caricature counting money on a mound of skulls. The poster is marked “Russ.ofs.d/1943-230917” .