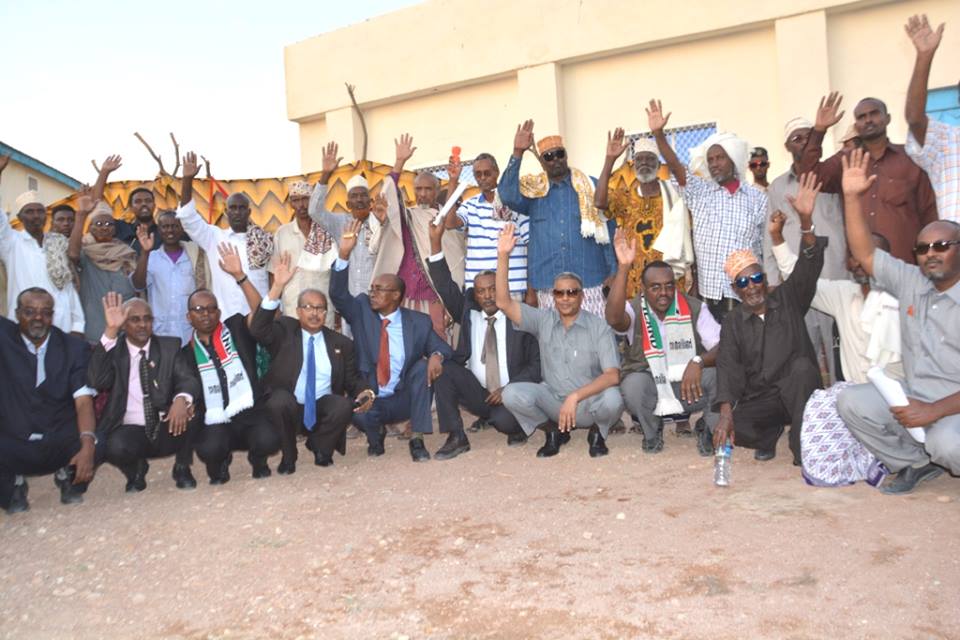 H.E. Mohamoud Hashi Abdi, the Minister for Presidency of the Republic of Somaliland, reassured delegates of the two-day Samotalis conference of Awrbogays between the government of Somaliland and the Dhulbahante clans (Mohamoud Bari, Hinjiinle and Kaskiqabe) of his government’s solemn commitment to completely fulfil its part of the resolution penned and signed between the two parties on Wednesday. The Minister, heading a high-level ministerial and parliamentary delegation to the conference among whom were the ministers for Information, Resettlement and State Minister for Aviation, could not conceal how awed he felt on atmosphere, attendance calibre of delegates, organisation of venue, validity of points raised and determination and will as shown by the hosting clans at Awrbogays.

“I had organized or had partaken in leading pacification conferences since 1991 and, I must say, rarely did I come across delegates of this calibre or determination as we had the honor to sit across at this conference,” he said.

The government, he said, was fully committed to fulfil its part of the resolutions reached without fail.

“As the conference is a direct response to President Ahmed Mohamed Siilaanyo’s call on Eastern regions clans to come to terms with his government on matters crucial to peace and development in those areas on a negotiating ‘mat’, the government would immediately make its word true and would leave no stone unturned to see to it that development schemes reached deprived areas as soon as possible,” he said.

The two sides signed a five-point commitment which covered a wide range of areas that, however, summed up crucial gaps that required immediate attention.

The five historical areas the agreement covered spanned across: (1) Political participation/inclusion at ll levels from the executive, legislative, and judiciary to district levels; (2) A commitment to the unity of the Republic of Somaliland; (3) Development initiatives and the steps to realize a full commitment on the part of the government and development partners for community level schemes, for instance, on both ‘short- and long-term projects’, and to encourage local and foreign investment in area;  (4) observance of peace and stability and a strong drive to strike full rapport among clans in the area and adjacent communities to encourage full integration and interaction among clans; and (5) Full participation in voter registration activities at all points the conferring clans resides in the regions of Sanaag, Sool and Haysimo (Full Somali text attached).

The government delegation was widely and warmly received on the outskirts of Awrbogays before the conference started on the 19 July.

His Excellency the Minister for Water Resources, Basheh Alie Jama, played a pivotal role in the organization of the clans’ turnabout stance.

MPs Suleiman Ali Koreh and Abdulkadir Indo-Indo – among others – worked full time to effect such a welcome, healthy change, too.

It is noteworthy that it was only a day earlier that the Somalia Federal State of Puntland tried to forcibly stop registration activities in eastern Sanaag using military muscle.

The attempt dismally failed on the first encounter with units of the Somaliland army.

Political observers agree that the Awrbogays resolutions landmark a crucial turning point in the relations between the Somaliland government and a major section of its constituency whose develeopment had fallen victim to a number of sabotaging policies spearheaded by politicians in Garowe and Mogadishu for the past quarter of a century.