From bustling cafés to ancient cave paintings and pristine beaches, the quasi-country presents an abundance of unexpected attractions.

Hargeisa, the capital of the breakaway region of Somaliland, is most visitors’ first port of call to this unusual quasi-country on the Horn of Africa. It is a brand-new, bustling city in the midst of a growth spurt, where shiny new high-rise buildings and endless coffee shops contrast with dusty, unpaved streets.

At the heart of the busy downtown lie the money markets, where vendors sit impassively behind their bricks of Somali currency while cars and pedestrians swirl around them. And yet, despite all this wealth on display, there are no guards or weapons in sight; in that sense, Somaliland could not be more different than the war-torn Somalia to the south that still grabs headlines in its battles with militants.

Indeed, since it declared its independence a quarter-century ago — something still unrecognized by any other country — Somaliland has been remarkably peaceful, and while poor, this little seaside statelet is thriving.

Though I myself have come here to visit some of the most beautiful cave paintings on the African continent, I’ve also been pleasantly surprised by its other attractions, including an emerging arts and music scene, a vibrant city and a pristine coastline with sandy beaches. 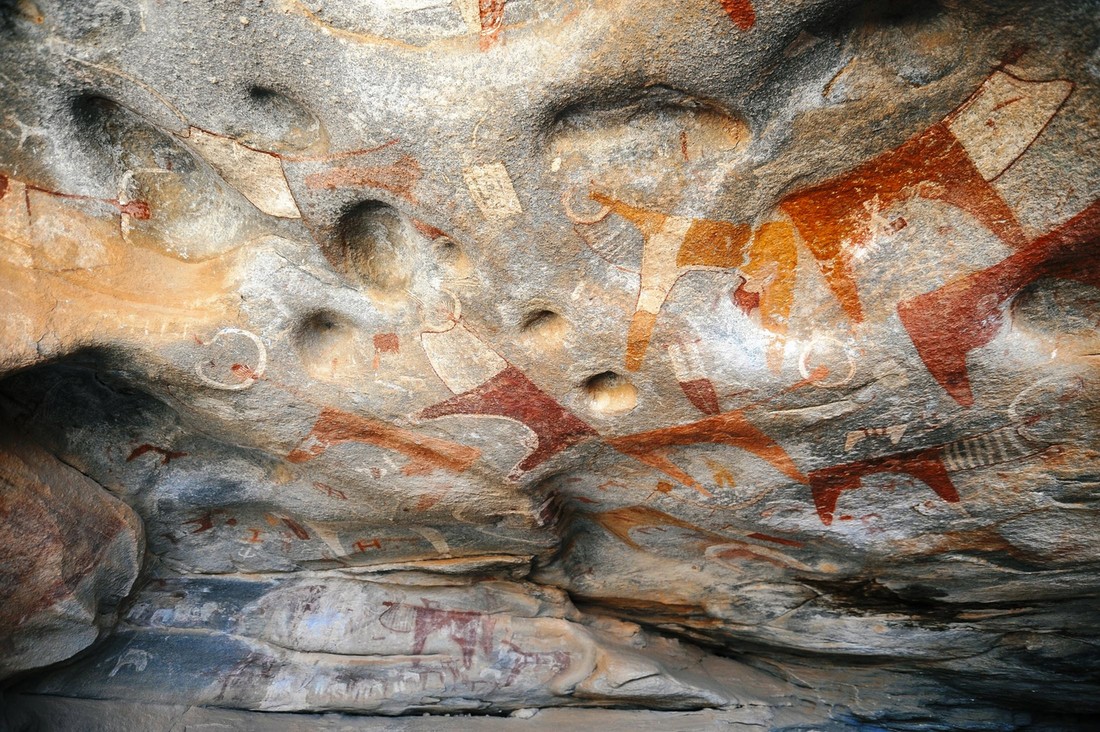 The Laas Geel cave paintings, found on the outskirts of Hargeisa, are some of the earliest known rock art in the Horn of Africa and are estimated to be 4000–7000 years old.
FREE WIND 2014 / SHUTTERSTOCK

It doesn’t take long after arriving to gain a sense of the city’s rhythm: It is quiet during the hot afternoon hours but springs to life as dusk approaches. I pass people-watchers aplenty, sipping espresso-style coffee or milky tea laced with cardamom at outdoor cafés, as I make my way to Hiddo Dhawr, one of the most popular restaurants in town.

Inhabiting a vast, tent-like enclosure, the two-year-old restaurant serves traditional Somali food on wooden plates. For US$15, you can get a full meal with a salad and main course, including traditional favorites such as suqaar (beef stew), spicy kaluun fish or a savory lamb-and-goat stew served with rice or spaghetti.

Hiddo Dhawr, the brainchild of Somali singer Sahra Halgan, also offers diners a taste of the rich poetry and musical traditions of this land. Indeed, it is one of Hargeisa’s only live-music venues, with nightly song and poetry recitals.

As I sit down to dine, I watch as people snap selfies in front of the stage and well-dressed couples throng in to fill the tables. Every night, performers come up to sing well-known Somali songs and recite verse, all while the crowd claps along and the waiters circulate throughout.

There are plans, explains co-owner Ismail Awal, to expand the complex into a kind of cultural village celebrating traditional crafts — something that has largely been forgotten in the forward-moving city. “If you forget your past, you won’t be able to navigate to your destination,” he says.

Over the past few years, Hargeisa has become the focus for new growth and investment in Somaliland. Members of the diaspora raised in England and the Gulf countries come back here to open restaurants and businesses and invest in new buildings — much needed after the city was largely destroyed in 1988.

Somaliland became a British protectorate in 1884, while Italians ruled the rest of Somalia. The two halves merged in 1961, but the relationship quickly soured; when the northern half tried to split off in the 1980s, a violent civil war began, in which Hargeisa was largely flattened.

When Somalia fell into chaos in 1991 with the fall of dictator Siad Barre, Somaliland took the opportunity to again go its own way. Now, two and a half decades later, a MiG fighter shot down during the 1988 bombings stands at the center of Hargeisa as a monument of defiance.

It is with an eye to rebuilding heritage and not just the buildings that Jama Musse Jama founded the Hargeisa Cultural Centre. After spending years in Italy, Jama returned to Hargeisa and is now a leading force in preserving Somali culture for future generations. He has painstakingly collected written works, recordings of oral poetry and artifacts for display at his center, which also organizes an annual book fair in August that brings in writers and artists from across Africa and the world.

With bright eyes and a soft voice, Jama produces a ready smile as he talks about efforts to protect Somali poetry and song and about convincing conservatives that this an integral part of everyone’s culture.

“Some consider access to culture to be a luxury,” he says from the center’s courtyard while an audience of children enjoys a play. “But the priority should be arts and culture. Without arts and culture, you cannot succeed as a society.” 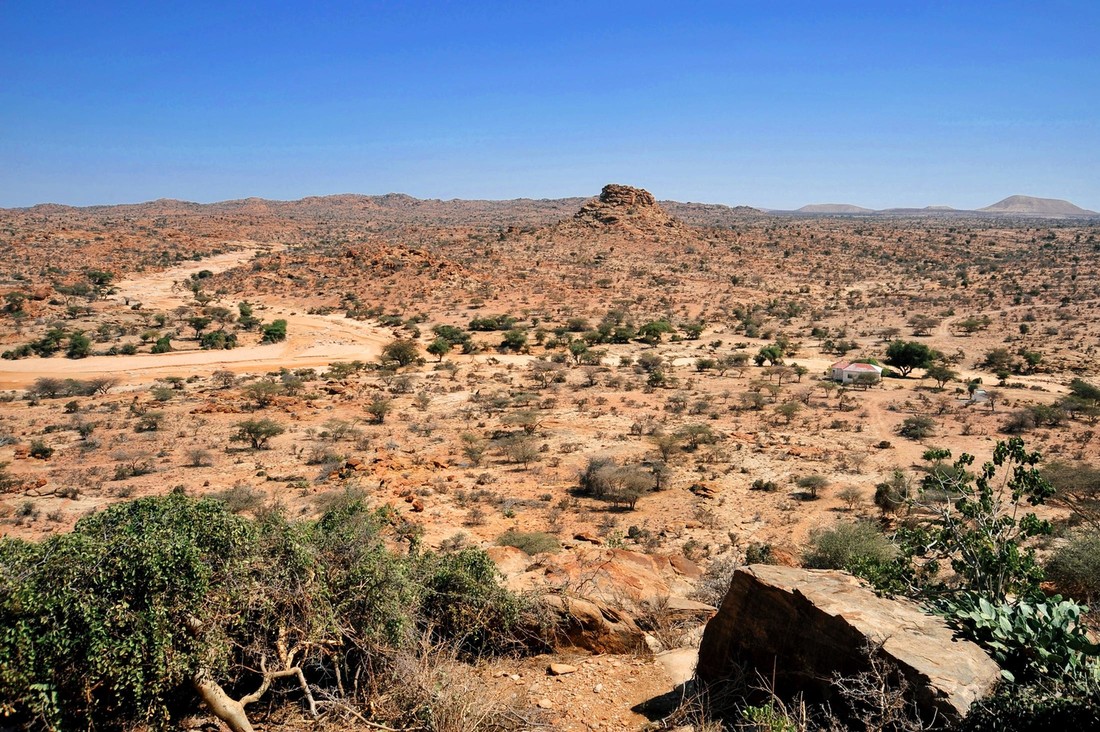 The Laas Geel outcropping can be seen from a distance. FREE WIND 2014 / SHUTTERSTOCK

To delve further into the history of the Somali people, I decide to leave modern Hargeisa behind and head into the arid backlands to the caves of Laas Geel — whose painted treasures are estimated to be between 4,000 and 7,000 years old.

Early in the morning, before the day’s heat really gets going, I clamber into a Toyota Land Cruiser and, together with my driver and guide, bump out of town on the main highway to find the caves. These kind of rock paintings can be found at sites across Somaliland, but those of Laas Geel are the easiest to reach and among the most brilliant.

After about an hour, we bid farewell to the reasonably paved road and its villages at regular intervals and turn onto a barely marked dirt track that takes off into the sere rock landscape of Somaliland. The driver nimbly dodges  acacia trees and spindly bushes and bumps over small boulders as we head for the caves.

It’s been a drought-ridden year in the Horn of Africa, and Somaliland is no exception, but it’s hard to imagine that this landscape was ever lush. My guide explains, however, that these rocky plains and scrubby vegetation are perfect for livestock — especially the goat herds that seem to abound everywhere. Somaliland’s main export is live sheep and goats destined for the Gulf countries, and the quality of its meat is celebrated.

The Land Cruiser finally pulls up to a small concrete hut next to a rocky outcropping at the meeting of two dry riverbeds. Honeycombed into the rocks here are shallow caves decorated with bright paintings of men and their cows, some draped in brilliant striped robes of orange and yellow. Antelopes, dogs and other animals in the paintings suggest a more verdant country back then. Archeologists believe that with all these paintings of daily life and sacred cows, the site must have been a ceremonial one at which the nomadic tribes would periodically gather.

With its isolated, craggy hills and parched riverbeds, the surrounding landscape has a harsh yet serene beauty, far from the noise of civilization. I sit for a moment and revel in the thought that herders must have met here once upon a time, their tents and animals stretching out into the distant horizons of rock and sand. 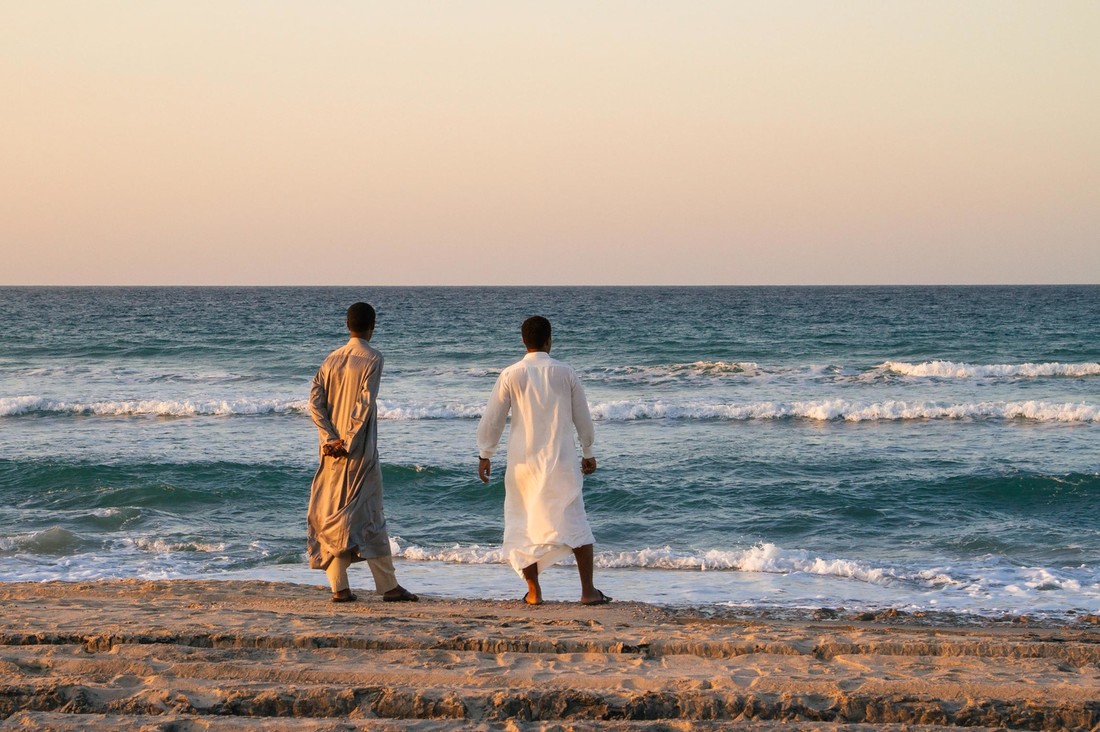 Somaliland’s history, though, is not just about the desert and herding; this strategically located land along the Red Sea has long been drawn into the orbits of historic empires. Trading ports have dotted the coast since the time of the Romans — if not before — and so, taking our leave of Laas Geel, we get back into four-wheel drive and head to check out one of the oldest: Berbera.

Whereas Hargeisa is new, the port city of Berbera still seems to slumber in the last few centuries. The narrow, sandy streets and alleys have the old feel of the Muslim world in the Middle Ages, and crumbling warehouses and merchant homes that date from the Ottoman period surround the port itself.

Amid the rubble of a collapsed wall, for example, I can still see the elegant arch of a window and imagine the merchant living above his warehouse, scanning the sea for the next ship.

A 10-minute drive from the town lies the beach, a totally unblemished stretch of sand with only one hotel to break the calm. The Hotel Mansoor does offer snorkeling and scuba diving, but I mostly spy locals going for a dip in the waves as the sun sets and waters of the Red Sea turn a deep shade of blue.

Berbera is a city that seems charmingly lost in time, with its old buildings, sleepy streets and freshly caught seafood, but I realize that will all soon change. Dubai Ports, the Emirati juggernaut, has been chosen to develop the port, and neighboring landlocked giant Ethiopia is very eager to diversify away from its dependence on Djibouti.

Soon, containers destined to feed Ethiopia’s economic machine will come pouring through Berbera and along the bumpy desert track through this strange quasi-state that, though unrecognized, appears to be doing quite well.

For now, though, Somaliland represents an unparalleled opportunity to see a rarely visited corner of the world and experience Somalia and its culture, unmarred by violence. And with remote villages and verdant coastal mountains still to see, I know I will definitely be making my way back — and soon.

Paul Schemm is a journalist living in Addis Ababa. He worked for the Associated Press in Morocco and Egypt and has traveled extensively through the Middle East. He first wrote about Somaliland and its port of Berbera for The Washington Post in 2015.

Published in the Nov-Dec edition of Selamta Magazine.