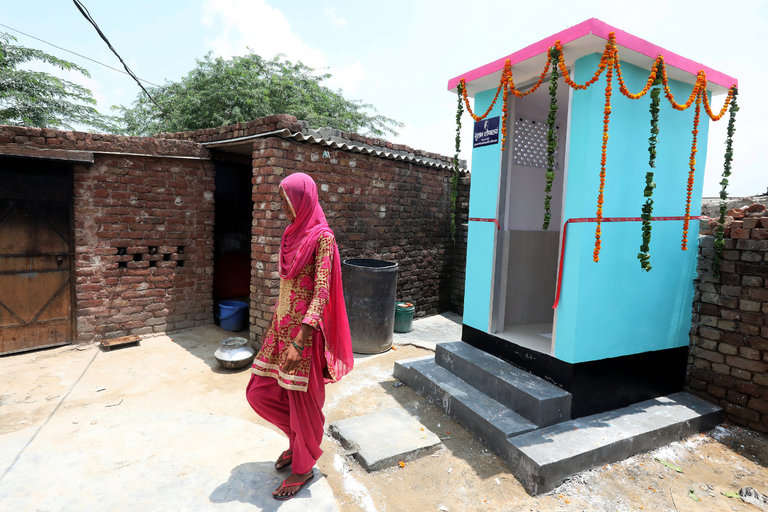 The most popular movie in India this summer is about a toilet. It nearly causes a divorce. It makes a father slap his adult son. It splits a village in half. But, ultimately, it’s about a romance.

More than just an ode to the commode, the film, “Toilet, a Love Story,” speaks to one of India’s most serious public health concerns. Toilets are a big issue in India these days: There aren’t enough of them for the country’s 1.3 billion people, and the national government is embarking on the biggest toilet-building campaign in the nation’s history.

India’s prime minister, Narendra Modi, troubled by how many Indians still relieve themselves in the open, has vowed to build a staggering 100 million new toilets.

All across the country, new latrines are going up, sometimes so fast they are not connected to anything, creating toilets to nowhere that are so fly-ridden and stinky that almost no one will use them.

There’s even a new mobile phone app telling people how to find the nearest john. “When nature calls,” billboards read, “use your phone!”

The lack of facilities is not just a matter of public health, as the movie makes clear, but also touches on issues of safety, women’s rights and human dignity.

Inspired by a true story, “Toilet” is loosely based on the experiences of a poor woman in central India, Anita Narre, who six years ago found herself in an arranged marriage to a field hand. Only after the wedding did she learn her new house had no toilet.

She refused to come back until her husband built her one. He does, and she returns. “Our love has grown since,” she said.

“Toilet,” which was released this month across more than 3,000 screens in India and at dozens of theaters internationally, seems to have struck a chord, even among India’s urban dwellers. 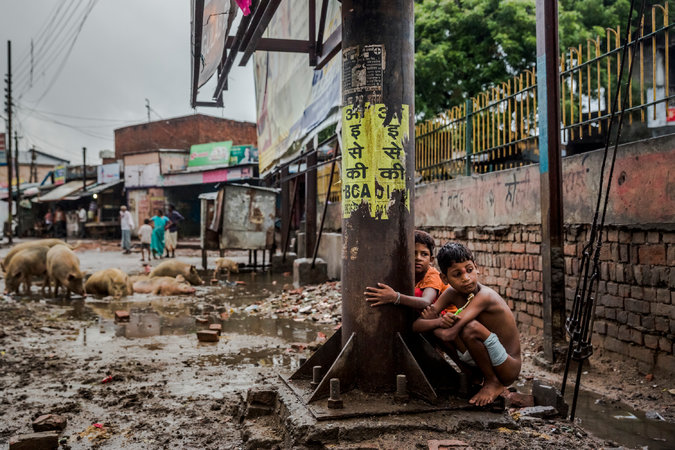 Children defecating outdoors in Varanasi in 2014. Nearly half the population still relieve themselves in the open, spreading disease and causing other health problems. CreditDaniel Berehulak for The New York Times

“I totally identify with the issue,” said Nishua, a 16-year-old high school student who goes by one name. She had just stepped out of a theater in New Delhi on a recent muggy afternoon.

When she was a child, Nishua recalled, her grandmother’s house had no toilet.

“For this one reason I wouldn’t want to visit her,” Nishua said. “I just didn’t look forward to visiting my grandmother for fear of being herded out in the fields to defecate.”

According to Unicef, around 564 million Indians, nearly half the population, still defecate in the open — in fields, forests, next to ponds, along highway medians and on the beach.

That spreads diseases and causes other public and personal problems.

It is no accident that “Toilet” opens with a beautifully lit scene of women trudging out of their village right before sunrise, each one carrying a little brass jug of water to wash with. They are traveling in a group for safety.

Rural women sometimes endure taunts and even sexual assault when they relieve themselves outdoors, so they travel in small groups, often before dawn, for protection.

“This is a real problem,” said Jagmati Sangwan, a women’s rights advocate. “So many women, especially landless women, face a lot of violence when they go to the bathroom outside.”

To avoid being leered at during the day, some women hold on for hours for darkness to fall. Waiting that long can create health problems, particularly for pregnant women, who are highly susceptible to urinary tract infections, experts say.

A recent study found a troubling correlation between pregnant mothers who had no toilet facilities and low birth weight.

Not helping matters, hard-liners with the governing Bharatiya Janata Party, or B.J.P., have photographed women who relieve themselves outside in an effort to shame them. Earlier this year, a man who stood up for such women was beaten to death.

Government officials say they have spent $4 billion to help install 50 million toilets so far, building community latrines and providing subsidies for people to put them in their homes. The Modi government runs a websitebestowing on top-performing villages a special “ODF” (Open Defecation Free) status. 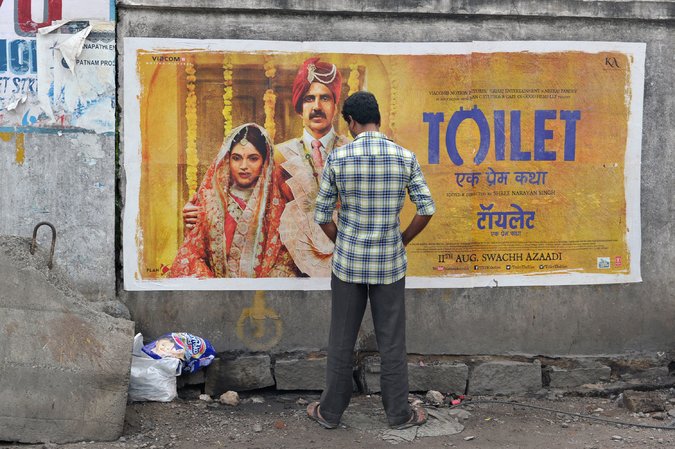 A man urinating in front of a poster for the movie, “Toilet, a Love Story,” in Hyderabad. The film, released during the largest toilet-building campaign in India’s history, has been the most popular in India this summer.CreditNoah Seelam/Agence France-Presse — Getty Images

Their efforts have earned praise abroad. Bill Gates, the billionaire co-founder of Microsoft, wrote on his blog: “I can’t think of another time when a national leader has broached such a sensitive topic so frankly and so publicly. Even better, Modi backed up his words with actions.”

But Mr. Modi’s detractors say there may be more emphasis on image than deed, and that in many areas party apparatchiks are so eager to fall in line with the prime minister’s directives that they are putting up latrines that are not connected to sewers or septic systems.

Several businessmen in New Delhi said government agencies are in such a rush that they are awarding contracts left and right with little oversight and often to businesses that know nothing about sanitation. According to Indian news reports, countless rupees have disappeared in shady toilet deals.

Sanitation specialists say that with less than 5 percent of India’s nearly 8,000 cities and towns having sewage treatment plants, it is far from clear where all the waste will go.

“There’s a blind scramble to make a toilet, whether it is usable or not,” said Bezwada Wilson, an official with the Sanitation Workers’ Movement, an advocacy organization. “It has become a business, and resulted in the corporatization of the toilet.”

There’s a tradition in Bollywood to make films that latch on to public campaigns, like those focused on the challenges of dyslexia or the rights of girls. State governments sometimes offer the filmmakers incentives. “Toilet,” for one, received tax breaks that have helped it earn around $20 million, a nice haul by Bollywood standards.

Akshay Kumar, 49, who is one of Bollywood’s most bankable actors and also a celebrity ambassador for the government’s Clean India campaign, said he chose to play the lead in “Toilet” because it highlighted the problems so many women face.

Just this month, for instance, in one of those instances of life imitating art imitating life, a woman in the state of Rajasthan demanded a divorce from her husband, partly because he had failed to provide her with a toilet.

The judge was highly sympathetic. In his decision, the judge wrote: “Can’t we, for the dignity of our mothers and sisters, arrange for toilets?”

In the end, the woman was granted a divorce.