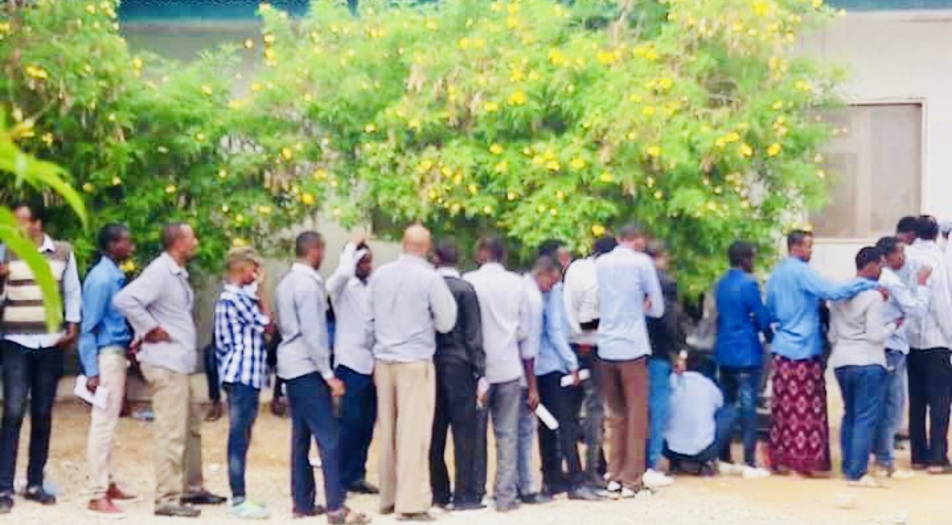 The report says high-ranking officials at Villa Somalia, the country’s Presidential Palace are facilitating the recruitment program which is the currently underway in several Somali semi-autonomous regions.

GO’s reporter in Garowe, the capital of Puntland, has visited passport office, where he interviewed youngsters lined up for Somali passports and preparing for a plan to travel to Qatar.

“We are here to get Somali passports, and will wait 20 days period for a Visa from Qatar, where we will undergo military training to become a soldiers,” said one of the youths, speaking to GO on condition of anonymity.

These youngsters, all men revealed to GO that Qatar will pay $6,000 for each soldier after the training courses. Hotels in Garowe are packed with youths recruited from Somaliland and other Somalia regions.
They have arrived in the city in search of passports.

In Mogadishu, at least ten persons said to be employees working for the Ministries of Somalia’s Federal government were dispatched to Qatar, becoming the first batch of the cadets, according to the sources.

GO understands that the sending the military students to Qatar is behind a top official at Villa Somalia, with reports indicating that this recruitment is aimed at training of mercenaries to fight for Qatar.

It is unclear whether the Somali Federal government and Federal member States are aware of the plan to recruit the unemployed youths taking passport to leave for Qatar as they are ‘being lured’ by Qatari agents.

On June 5, 2017, Saudi Arabia, along with several Arab allies, cut diplomatic ties with Qatar in a move that sent shockwaves throughout the Middle East and beyond, including Somalia.

Doha is working on plans to increase its army and eyeing the unemployed youths in poor countries, including Somalia, where it is recruiting low paid soldiers for a purpose to strength its military capability.

Last week, Turkey which threw support behind Qatar in rift with Gulf Arabs has set up its biggest overseas military training base in the Somali capital, Mogadishu, increasing Ankara’s presence in the Horn of Africa country.

Turkey has influence in Somalia, as Turkish firms, including Al Bayrak manages Mogadishu’s port in a two-decade contract, while Favori LLC is handling the lucrative Aden Adde International Airport.

Somali Federal government stayed neutral on the Gulf crises, a decision sparked political crises in the country after several Federal State Members disagreed and sided with Saud-led bloc against Qatar.

The leaders of five regional states wrapped up Wednesday a two-day meeting in Kismayo with a joint communiqué suspending temporarily reviews on the country’s draft constitution until deal reached in resource sharing.

The Villa Somalia Chief of Staff, Fahad Yasin, who is also one of the President’s Aides has a “very close relationship” with Qatar, as he worked many years for Doha-based Al Jazeera’s Arabic Channel.

Yasin became head of an organization that conducts research projects in East Africa before shifting to the Somali politics.

He involved in the formation of former Federal government led by Hassan Sheikh Mohamud, and the current administration led by President Mohamed Abdullahi Farmajo.