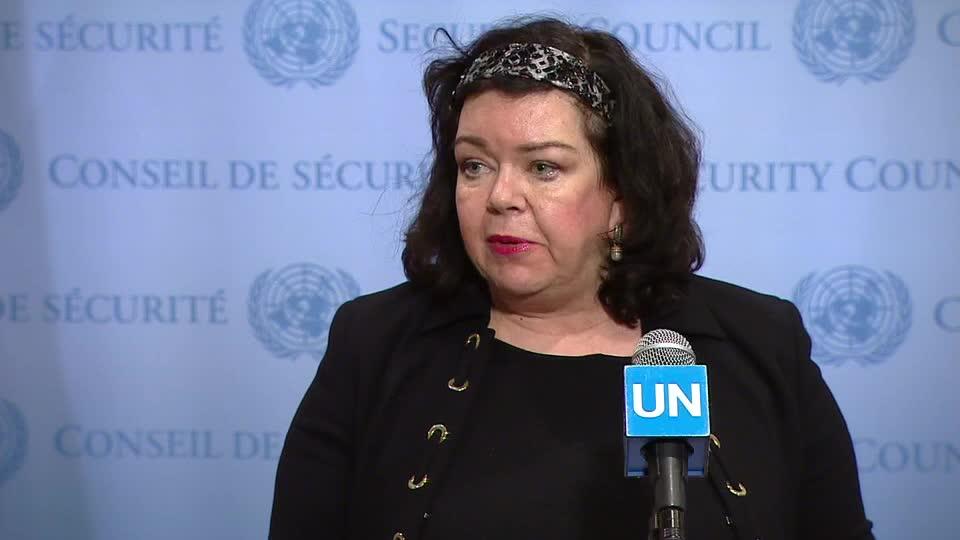 When Ambassador Karen Pierce of the UK, the UN Security Council’s “penholder” on Somalia, took questions on April 18 Inner City Press asked her about the United Arab Emirates suspending support to the Somali military, and the issue of the UAE’s port / base in Somaliland. Video here. Pierce said she wasn’t aware of the specifics but that the UK supports Somalia and that she’d met with the UN’s (British) envoy to Somalia, Michael Keating. Inner City Press, following up on Pierce’s literary back and forth with her Russian counterpart Vassily Nebenzia, noted that Keating has a book coming out. And he does – something that Somalis and even other UN envoys have raised to Inner City Press as questionable, given the amount of work a UN envoy to Somalia should be doing. We’ll have more on all this. The day after Somalia in the UN Security Council complained of Somaliland engagement with the United Arab Emirates, Inner City Press asked UN Spokesman Farhan Haq for the UN’s position. He said it is a bilateral matter between Somalia and… the UAE. From the UN transcript: Inner City Press: Yesterday, in the Council, Somalia made a point of saying that they believe that an agreement between the UAE and Somaliland to build a military base is illegal and I wanted to ask, since the UN has this Envoy, Mr. Michael Keating… What’s his position? It’s a pretty big standoff between a de facto autonomous region agreeing to a military base by another country, the UAE.  Some people say this was permitted under an agreement [reached in Turkey, which Inner City Press put online here].  Some say they aren’t.  What’s the UN’s position on the UAE building a military base in Somaliland? Deputy Spokesman:  Ultimately, these are discussions that need to be resolved bilaterally between the Governments of Somalia and the United Arab Emirates.” Hmm. Note that Inner City Press has also asked the UN about the UAE moving in on Socotra Island of Yemen, here. Back in September 2016 after in Somaliland a petition was announced, with a million signatures, seeking recognition of independence, Inner City Press put the question on September 27 to UN envoy Michael Keating, video here. He said he’s been asked to get more involved – but what does that mean?

He told Inner City Press he is unaware of the tariff / recognition issue with Kenya, and that he has not met with the UN’s new Resident Coordinator for Kenya, Ban Ki-moon’s son in law, during the ten days the latter has been in New York.

Keating gave a useful explanation of the Somali president being in caretaker mode; it was the foreign minister who spoke in the General Assembly debate and meets Ban Ki-moon on September 28.

Wilson said Somaliland is “complex,” but that he expected it to be turned to in the Security Council consultations later that morning.

From the UN transcript:

Inner City Press: This is a Somaliland question – I’ve asked Ambassador Rycroft before – there is this petition of a million people in Somaliland who try to say that they should be recognized. It any or may not be realistic. But what does the UK government think of the place of Somaliland in the greater Somalia in the process that you’re dealing with here?

Wilson: Well, I think for the process of the elections what we’re most keen to ensure is that there’s as much participation as possible. The issue of Somaliland is a very complex one, but it’s one that I’m expecting that we will turn to in consultations.

The Free UN Coalition for Access seeks to open the UN and these processes.