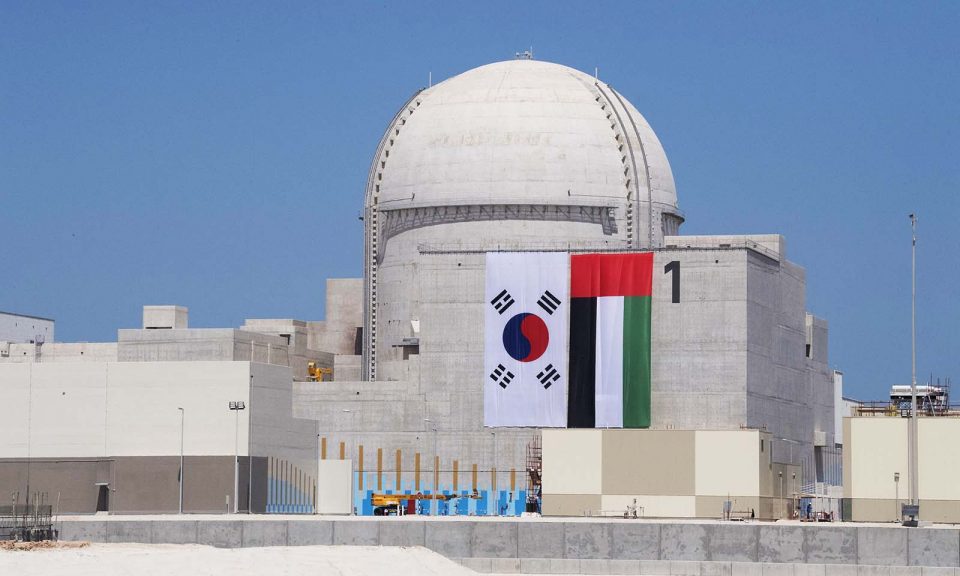 hile recent debate has focused on Saudi Arabia’s atomic ambitions – from planned power stations to the possibility of a Saudi bomb – in fact, Riyadh remains far behind in the race to become the first country on the Arabian side of the Gulf to have nuclear power.

That contest is about to be won instead, by the UAE.

Located on the Gulf coast some 250km west of the Emirates’ capital, Abu Dhabi, and just 50km from the Saudi border, Unit 1 of the first commercial nuclear power plant in an Arab country has just been completed.

This is the first of what will eventually be a giant, four-reactor complex at Barakah, being built by a consortium led by the Korea Electric Power Corp. (KEPCO).

Barakah will generate some 5,600 MW of electricity when all of its APR1400 units are operational, sometime in 2021. Unit 1, which is due to begin loading fuel in May, will likely begin generating power later this year.

This remarkable achievement places the UAE at the forefront of a new global wave of nuclear energy generation. It is also a major source of national pride – and a symbol of the country’s growing international stature.

Indeed, the Emirates’ reach has been widening greatly in recent years, with the UAE’s traditional economic power now being increasingly supplemented by military and diplomatic involvement.

Abu Dhabi has taken an important role in conflicts from Syria to Libya, and from Bahrain to Yemen. It has also been key in the recent Qatar dispute, is pursuing interests in the Red Sea, Horn of Africa and Indian Ocean, and has become a powerful lobby within the Washington beltway.

“It’s easy to think of the UAE as a wealthy but small country,” says Adam Baron, Visiting Fellow for the European Council on Foreign Relations’ Middle East and North Africa Programme, “but the reality is, it has a vast regional footprint and a vast regional influence.”

In terms of overseas missions, the Emirates have been increasing the depth and range of its involvement for some years, now.

One pillar of this outreach has been aid – in 2017, the UAE was the world’s largest donor of overseas development funding, relative to the size of its economy. Countries recovering from conflict – from the Balkans to Africa – have been particularly favored.

Another pillar, meanwhile, has been military. In 1999, UAE troops joined the NATO-led peacekeeping force in Kosovo. Then, in 2003, Emirati military units joined the US-led coalition’s operations in Afghanistan. There, the UAE’s air force and special forces, in particular, have gained valuable experience, since used elsewhere.

At sea, the Emirates has also been a driving force in the Contact Group on Piracy off the Coast of Somalia (CGPCS), while supervising an anti-piracy force in Somalia’s semi-autonomous Puntland region. In 2014, the UAE began supporting the African Union military mission to Somalia, too, training government troops, and in 2017, they began construction of a military base in breakaway Somaliland.

In 2011, the UAE joined the NATO campaign in Libya, while they have also since joined the fight against ISIS, conducting airstrikes in Syria and Iraq from airbases in Jordan.

In 2011, too, UAE security forces joined with Saudi troops to intervene in Bahrain, helping suppress anti-government protests. In 2015, Emirati troops were also side-by-side with the Saudi armed forces and other members of an Arab coalition in Yemen, which has seen the greatest commitment of Emirati troops – as well as the greatest casualties.

“UAE foreign policy may seem geographically disparate, but it’s governed by a set of principles and an overarching strategy,” says Elizabeth Dickinson, the International Crisis Group’s Senior Analyst for the Arabian Peninsula. “The UAE wants to see greater regional stability, pushing back against the actors they see as exacerbating or exploiting strife.”

This has principally meant acting against radical Islamist forces and against what Abu Dhabi sees as a related expansion of Iranian influence.

Thus, “In Yemen, the UAE wanted to back anti-Muslim Brotherhood (MB) and anti-Houthi forces,” adds Baron, “especially in the south of that country.” Abu Dhabi sees the Brotherhood as a key factor in instability in the Sunni Arab world, and the Shiite Houthis as a pro-Iranian danger.

In 2017, the Emirati alliance with the Saudis also led to the two countries launching a blockade against Qatar. Along with its close ally, Turkey, Qatar has supported the MB in the past, while Abu Dhabi also sees Doha as too close to Iran. The blockade has also revealed the power of the UAE’s lobby in Washington, with the UAE Ambassador to the US, Yousef Al Otaiba, now frequently featuring in US involvement with the Middle East.

While such interventions do establish the UAE as a key regional player, they are not without their risks, however – with the pursuit of stability often notoriously de-stabilizing.

The war in Yemen is now in its fourth year, while the Emirates are also embroiled in increasingly fierce competition in the Horn of Africa. The UAE recently canceled its military training programme in Somalia, too, after Somali security forces seized an Emirati payroll plane in the capital, Mogadishu. Recently, Somalia has been strongly courted by the UAE’s regional rivals, Qatar and Turkey, with the latter also running a military training facility there. The UAE’s base in Somaliland – a break-away region in Mogadishu’s eyes – has also irked the Somali government.

Despite its wealth, the Emirates is a country of just nine million people, only 1.4 million of whom are nationals, now with a wide range of overseas engagements. This does pose the risk of over-reach, but, as the Barakah nuclear power plant demonstrates, the UAE has quietly and efficiently achieved a great deal in recent years – and with implications far beyond its Arabian borders.