Home World News/International Conflict/Crime When an airstrike killed my friend’s brother I learned grief knows no... 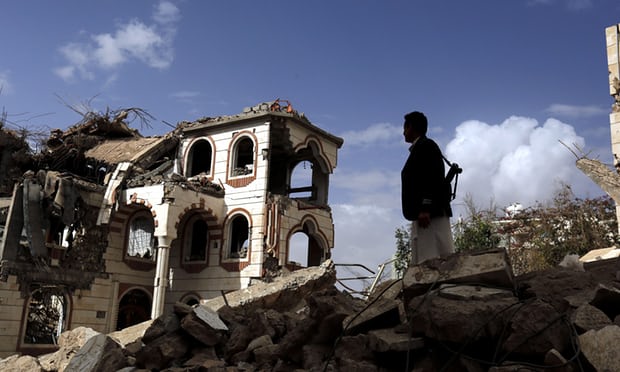 We’re used to hearing about tragic war casualties in the Middle East. But a Saudi attack in Yemen brought home to me the full human cost

We get used to news about devastating airstrikes in the Middle East. On Tuesday we heard about a chemical attack in Idlib, Syria, that killed 58 people; in the Iraqi city of Mosul, more than 100 people are now known to have perished in a suspected coalition attack; and in the Red Sea last month, over 40 Somali men, women and children lost their lives in an airstrike by the Saudi-led coalition. For the most part we respond to these as tragic news stories; but it took the Red Sea bloodbath for me to fully sense the human cost behind these headlines.

The WhatsApp messages arrived one lazy Saturday morning, four short lines full of heartbreak. My close friend Ilyas had lost his younger brother, Hassan, in the Saudi attack. He had heard about the airstrike through the media and thought “how sad”, as most of us did, without any inkling of the devastating impact it would have on his own family.

A female survivor had rung one of his relatives in Hargeisa, Somaliland, with the news; she had been seated beside Hassan on the ferry and they had presciently exchanged emergency numbers. Desperate to know more, Ilyas, a professional news cameraman, went on to the Getty website and saw images of Hassan, wearing his beloved Liverpool FC shirt, in photo after photo.

Hassan, 25, had left home just six weeks earlier, running away from the pain of a difficult relationship and the lack of opportunities in Somaliland. He had never left his country before and Yemen, a short hop across the Red Sea, has attracted Somali migrants for more than a century. Even now, during this horrific war, 100,000 people from the Horn of Africa arrive each year. Hassan, perhaps relieved to be leaving Yemen, wrote on Facebook before boarding the ferry: “Suffering is not everlasting, one does not have it in their DNA, sooner or later it comes to an end.”

The attack had apparently started soon after 9pm: a military vessel fired on the boat first, and then an Apache helicopter joined in, shooting indiscriminately on the unarmed men, women and children for half an hour. The fatally injured captain managed to steer the boat back to the Yemeni city of Hudaydah.

Ilyas had assumed his chatty, funny, football-mad brother was in Libya and had been awaiting the inevitable phone call from a people smuggler demanding payment. Instead, he has spent the past fortnight arranging Hassan’s funeral, a maddeningly difficult process in any foreign country, never mind a war zone such as Yemen. There has been no assistance from the Somaliland government, so his brother will not be repatriated but buried in Hodeida where he had no family or friends.

This week has taught me grief knows no geographical boundaries; and as the Metropolitan police start an investigation into allegations of Saudi war crimes in Yemen, I hope justice doesn’t either.

Scrolling through my Twitter feed means jumping from funny gifs to beautiful artworks to disturbing films. The most recent was the live-streamed clip of an Ethiopian woman in Kuwait, falling several storeys from a balcony, her employer mocking her pleas for help. What is all this doing to us? The desire to spread evidence of a crime in its most powerful and unadulterated form is understandable, but in discarding a person’s dignity and privacy do we not turn suffering into a form of entertainment too?

Balm for the soul

I have retreated into music recently as a means of escape and a way of reviving my battered imagination before I step forth into the last few chapters of my novel. The Inkspots, Eartha Kitt, and other musicians from the 40s and 50s have featured heavily. Right now, it’s Purcell for breakfast, Nusrat Fateh Ali Khan for lunch, and the lazy purr of Chet Baker for dinner. They have all provided me with balm for the soul. These long-dead artists remind me that life is short but art is long, and that everywhere we are, we experience the same longings and pleasures.

Nadifa Mohamed is the author of The Orchard of Lost Souls