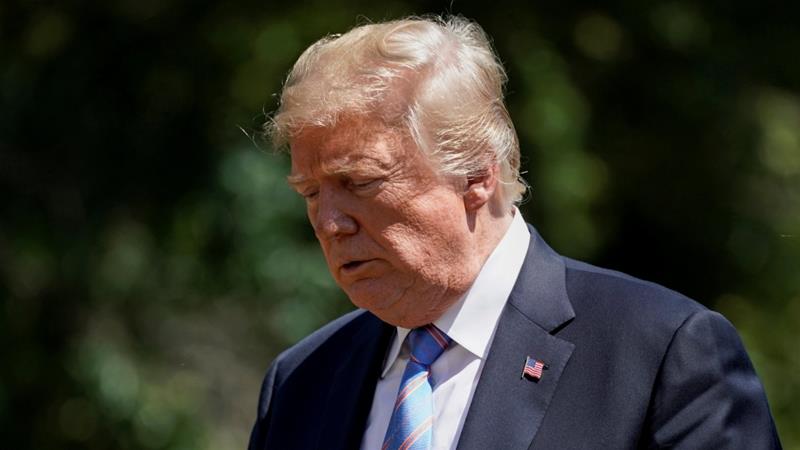 Michael Cohen’s recording adds to questions about whether Trump tried to quash damaging stories before 2016 election.

US President Donald Trump has reacted to reports that his former lawyer secretly taped him discussing payments to a former Playboy model two months before the 2016 election, amid questions about whether the then-Republican candidate tried to quash damaging stories before the vote.

The recording was discovered when the New York offices of lawyer Michael Cohen were raided by the FBI earlier this year following a referral from Robert Mueller.

Mueller is the special counsel probing alleged Russian interference in the election and whether the Trump campaign colluded with Moscow. The FBI investigation is separate from Mueller’s probe.

“Inconceivable that the government would break into a lawyer’s office (early in the morning) – almost unheard of,” Trump wrote on Twitter on Saturday.

“Even more inconceivable that a lawyer would tape a client – totally unheard of & perhaps illegal,” he said, adding that he had done “nothing wrong”.

Cohen had made a practice of recording telephone conversations, unbeknown to those he was speaking with.

Most states, including New York, allow for recordings of phone conversations with only the consent of one party; other states require all parties to agree to a recording or have mixed laws on the matter.

It was not immediately clear where Trump and Cohen were located at the time of the call.

Former Playboy model Karen McDougal claims she had a months-long affair with Trump after they met in 2006, shortly after Trump’s wife Melania gave birth to their son Barron.

She told CNN previously that he tried to pay her for sex.

The Wall Street Journal said the September 2016 conversation between Trump and Cohen was about buying the rights to McDougal’s story, which she had sold a month earlier to The National Enquirer for $150,000.

The tabloid ultimately did not publish the story, preventing it from becoming public.

David Pecker, the chairman of its parent company, American Media, is a friend of Trump’s.

The reports raised questions about why Trump’s campaign denied knowledge of the deal between McDougal and American Media when it became public, and they fanned speculation about how much damage Cohen, who has not been arrested or charged, might be able to inflict on the president.

The recording was first reported on Friday by The New York Times.

Trump’s current personal lawyer, Rudy Giuliani, confirmed to the Times that the Cohen tape existed, but said it showed the president had done nothing wrong.

Al Jazeera’s Patty Culhane, reporting from Washington, DC, said that Trump’s statement that the government would break into a lawyer’s office was inaccurate.

“They didn’t break in, they had a warrant issued by a judge. To get a warrant for a lawyer’s office you have to have a really high bar of proof,” she said.

Culhane said Trump has been able in the past to dismiss these kinds of stories as “fake news”.

“[But] it’s very hard to claim ‘fake news’ if people can actually hear you on tape – the more interesting thing is that Cohen apparently has lots and lots of these tapes,” she added.

A self-described fixer for Trump for more than a decade, Cohen said last year he would “take a bullet” for the president.

But he told ABC News in an interview broadcast this month that he now puts “family and country first” and will not let anyone paint him as “a villain of this story”.

On Twitter, he scrubbed mentions and photos of Trump from a profile that previously identified him as “Personal attorney to President Donald J. Trump.”