Home Opinion/Analysis Donald Trump just tweeted something new about the Russia investigation — and... 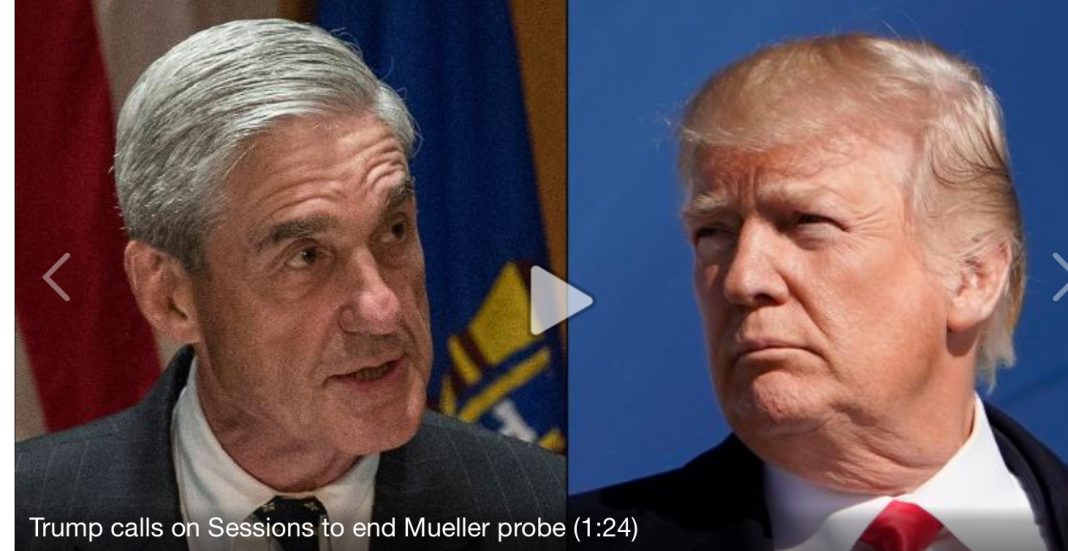 President Donald Trump has made his displeasure with Attorney General Jeff Sessions, special counsel Robert Mueller and the ongoing investigation into Russia’s interference in the 2016 election he is leading crystal clear over the past year. But he took that critique to new heights on Wednesday morning, suggesting that Sessions needed to step in and end the investigation.

“This is a terrible situation and Attorney General Jeff Sessions should stop this Rigged Witch Hunt right now, before it continues to stain our country any further,” Trump tweeted. “Bob Mueller is totally conflicted, and his 17 Angry Democrats that are doing his dirty work are a disgrace to USA!”

While there may be some debate over whether the President tweeting that Sessions should stop the investigation is different than him directly telling the attorney general to do so, we shouldn’t get too caught up in the semantics here.

What happened on Wednesday morning is this: The President of the United States asked the top law enforcement official in the country to end an investigation into a) Russia’s active-measures campaign to interfere in the 2016 presidential election to benefit Trump and hurt Hillary Clinton and b) the possibility that a member (or members) of the Trump campaign colluded with the Russians to aid that end goal.

This is a bridge further than Trump has been willing to go in the past. Sure, he has run down Sessions relentlessly ever since the former Alabama senator decided to recuse himself from the Russia investigation. (Side note: Sessions’ recusal means that, technically, he can’t end the probe as Trump wants. That duty would fall to Deputy Attorney General Rod Rosenstein, who Trump has also maligned via social media.)

Trump’s lawyers immediately sought to walk the tweet back. Rudy Giuliani told CNN’s Dana Bash that Trump was “was expressing his opinion on his favorite medium, Twitter, for asserting his First Amendment rights” and said the tweet wasn’t a demand.

“We have been saying for months that it is time to bring this inquiry to an end,” Giuliani said in a statement to CNN. “The President has expressed the same opinion.”

And, yes, the President has suggested — in a broad sense — that the investigation should end soon. “At what point does this soon to be $20,000,000 Witch Hunt, composed of 13 Angry and Heavily Conflicted Democrats and two people who have worked for Obama for 8 years, STOP,” Trump tweeted in May. “They have found no Collussion [sic] with Russia, No Obstruction, but they aren’t looking at the corruption.”

But what he has never done before is specifically direct Sessions to end the investigation. Which is a big deal. And provokes a simple question: Why now?

Trump himself provided a semblance of an answer to that question moments after he tweeted out his call for Sessions to bring the special counsel probe to an end. Ten minutes after the Sessions tweet, Trump sent this one:

“Paul Manafort worked for Ronald Reagan, Bob Dole and many other highly prominent and respected political leaders. He worked for me for a very short time. Why didn’t government tell me that he was under investigation. These old charges have nothing to do with Collusion – a Hoax!”

Manafort, who served as Trump campaign chairman and de facto campaign manager from the spring until the late summer of 2016, is currently in the midst of a trial in which he faces numerous charges of financial improprieties related to his work for the pro-Russia Ukrainian government. The charges against Manafort stem directly from the Mueller probe and are regarded as the leading edge of the former FBI director’s investigation — which is expected to reach its conclusion sometime this fall.

Later, Trump added: “Looking back on history, who was treated worse, Alfonse Capone, legendary mob boss, killer and “Public Enemy Number One,” or Paul Manafort, political operative & Reagan/Dole darling, now serving solitary confinement – although convicted of nothing? Where is the Russian Collusion?”

And then there’s this: Last week we learned — thanks to CNN reporting! — that former Trump personal fixer Michael Cohen says he is willing to tell Mueller that Trump had advance knowledge of a June 2016 Trump Tower meeting between top Trump campaign officials and a group of Russians. Trump has repeatedly denied he knew about the meeting, which came about after the Russians — through an intermediary named Rob Goldstone — promised dirt on Clinton to Donald Trump Jr. (Speaking of Don Jr., he has testified to Congress under oath that he never told his father about the meeting before it happened.)

Those developments come on top of the fact that five people have already pleaded guilty to a variety of crimes in relation to the Mueller probe, and two high-profile former Trump staffers — former national security adviser Michael Flynn and former deputy campaign chairman Rick Gates — are cooperating with Mueller. Cohen, who could well face criminal charges on unrelated matters in connection with an ongoing investigation by the Southern District of New York, is also seen as a potential cooperating witness.

In short: It’s getting a little hot in here for Trump.

Talk to any of the people Trump confides in and they will all tell you that he believes wholeheartedly that he has done nothing wrong in connection with Russia and that the investigation is truly a witch hunt. But as Mueller creeps ever closer to Trump’s innermost circle — and Cohen as well as longtime Trump organization chief financial officer Allen Weisselberg are as “inner” as you get — the pressure grows. And don’t forget that we know Mueller’s team is looking not only into Russian efforts in the 2016 election but also possible obstruction of the investigation as it relates to the removal of Flynn and former FBI Director James Comey in 2017.

Trump’s lawyers have said he would be potentially willing to talk to Mueller about collusion — NO COLLUSION! — but that obstruction would be off the table for fear that Mueller would be leading the President into a perjury trap. Taking obstruction off the table in light of Trump’s tweet Wednesday telling Sessions to end the investigation is — how to say it? — interesting.

It’s hard to separate signal from noise when it comes to Trump’s reactions to the Mueller probe. But the tweet this morning is an escalation from what we’ve seen from this President before. And we should all be paying very close attention to what happens next.