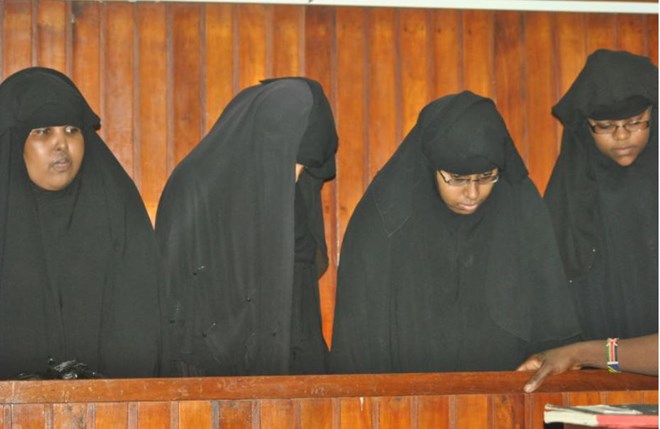 A woman accused of being a member of Al Shabaab terrorist group has told a court that police arrested her when she went to visit her brother in a boarding school in Kajiado.

Halima Adan, who is accused of recruiting and funding terrorism activities in Kenya, denied any involvement or connection with the terrorist group.

While giving her unsworn evidence before Chief Magistrate Eric Makori yesterday, Ms Adan said she was arrested together with her brother, her uncle, who is a truck driver, and a conductor who had given them a lift to Nairobi.

Abubakar and Abdalla were arrested on March 27, 2015, At El Wak in Mandera trying to enter Somalia while Adan was intercepted in Machakos on April 3, 2015. Both are out on a Sh500,000 bond after spending two years in remand.

“I was on my way to visit my young sibling who schools in Manner, Kajiado County. I have never been involved in any terror activity neither do I have any connections,” she said.

Adan, who was remanded at Lang’ata Women’s Prison after being arrested again and charged in Nairobi with funding terrorism activities, said nothing that could incriminate her was found on the day of the arrest about three years ago.

She was charged together with Maryam Said Aboud, Khadija Abdulkadir Abubakar, and Ummul Khayr Sadir Abdalla.
Aboud has since died.

Abubakar and Abdalla were arrested on March 27, 2015, At El Wak in Mandera trying to enter Somalia while Adan was intercepted in Machakos on April 3, 2015. Both are out on a Sh500,000 bond after spending two years in remand.
The judgement is set for August 30.

The three are facing similar terror charges before Senior Principal Magistrate Henry Nyakweba. Adan said she became the breadwinner of her family of eight after her father died in 2009 and her mother became ill.

She has been accused being a member of Al Shabaab terror group. She is also facing five charges of collecting videos and articles for commission of terror acts through her Samsung phone.

She has denied owning a Samsung phone. Adan said before her arrest, she had never met her co-accused and that she came to learn that they were being charged with the same offence after they were arraigned.

“I came to know my co-accused on May 6, 2015, after being charged. I stayed with them in custody for two years and came to know they were good and well-mannered ladies,” said Adan.

She said police had not proved that she was a terrorist and a member of the terror group. The told the magistrate police confiscated a Nokia phone from her and her identity card that she had carried on her journey to Nairobi.

Adan said she was detained for five days at Kilimani Police Station before being charged in Mombasa.

“I was arrested on May 2, 2015, and not May 3, 2015, as alleged by police. I was detained at Kilimani, where I stayed from Thursday until Monday, when I was bundled into a Probox and brought to Mombasa. I was detained for 30 days before I was finally charged,” said Adan.

The judgement is set for August 30.