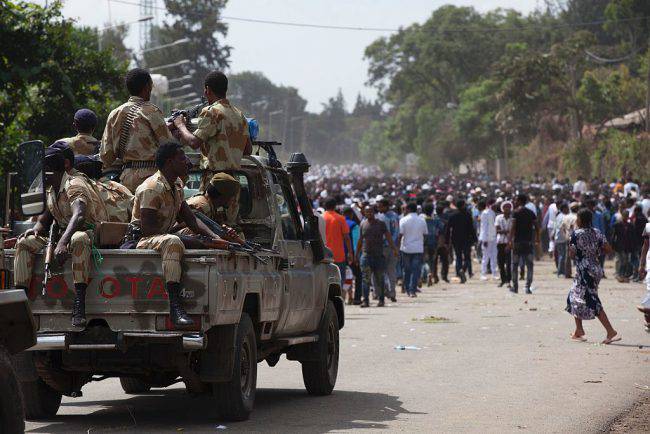 Violence has broken out in an eastern city in Ethiopia after federal troops took over key positions including the local parliament.

Soldiers were deployed in Jigjiga, the capital of the Somali region, after an apparent rift between local authorities and the national government.

Protesters set fire to a church and looted shops and targeted non-Somalis.

There has also been disagreement over the distribution of the region’s oil wealth.

According to Reuters, soldiers arrived in the city on Friday night, where they fought regional paramilitary forces.

These forces have been partly responsible for ethnic violence with the neighbouring Oromia region, which has claimed hundreds of lives.

BREAKING: Somali-Ethiopian leaders who have been meeting in Dire Dawa in past two days have urged residents in Jigjiga to stay calm, avoid violence and not to attack other ethnic communities. The leaders who are opponents of the regional president say they are en route to Jigjiga

A tension has been brewing in Jigjiga, the administrative capital of the Somali regional state in Ethiopia after the Federal military took over the control of the town on Saturday.

After a brief clash with Liyu police forces, the Ethiopian Federal troops backed by tanks rolled into the key town and seized main streets, key buildings and parliament house.

The military seized the installations including the headquarters of state-owned media, the parliament and the presidential palace of the state.

Unconfirmed reports say widespread looting erupted in the capital. The whereabouts of the regional president Abdi Mohamud Omar is yet unknown.

Read the original article on Shabelle.