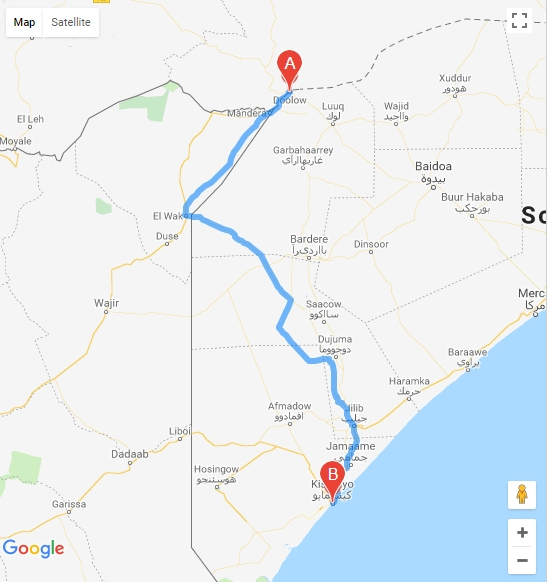 Reports emerging from Doolow District of Gedo region, which comes under Jubbaland State of Somalia, confirm that Al Shabaab fighters have wrenched back control and administration of Geedweyne, outside Doolow, from Jubbaland, Somalia National Army forces earlier today, Friday.

Residents of the area stated that hundreds of Shabaab militia fighters could be seen patrolling the town and outlying areas.

Reports established that the invading forces had easily overpowered the small contingent of government forces in the area. The Shabaab fighters had more in numbers, weapons and mechanized fire-power.

“On top of the light, Kalashnikov automatic guns the fighters used, a good number had also shoulder grenade propellors, bazookas, and were backed by wll-serviced battle-wagons, popularly known as ‘technico'”, eyewitnesses said.

The fighters immediately about, as usual, to round up government personnel and ‘collaborators’, burnt documents and established its command posts in and outside the small, but strategically, important town.

Doolow is a little over 700 kilometers from the seat of the Jubbaland State and is located on the Somalia-Kenya border. Kenya Defense Forces (KDF) near the occupied area engaged the fighters from a distance by shelling mortars towards the general area without much effect.

Gedo region is suspected to be one of the strongholds – if not the largest – that still remain in the hands of the Al-Qaeda-linked fighters.

The KDF, part of the AU’s peacekeeping forces, lends Jubbaland state and Federal Somalia forces in the area combat support. Of late, the KDF has become under pressure to explain allegations of human rights abuse, including gang rape at least on one occasion, directed against members of its forces on duty at posts in the Gedo region.

As made public by Al Shabaab media, the Islamist forces have engaged contingents of the Uganda People’s Defense Forces (UPDF) on at least two separate locations inflicting a degree of loss.

Reports said the first happened in the dark of night on Thursday in the vicinity of the Qoryooley Bridge, the second on a road near No. 60, both of the Ex-Lower Shabelle, now coming under the Southwest Federal State of Somalia.

Al Shabaab says at least 7 UPDF troopers were killed in the two skirmishes.

Neither Somalia’s SNA nor the government has yet to respond to the alleged Shabaab military gains.