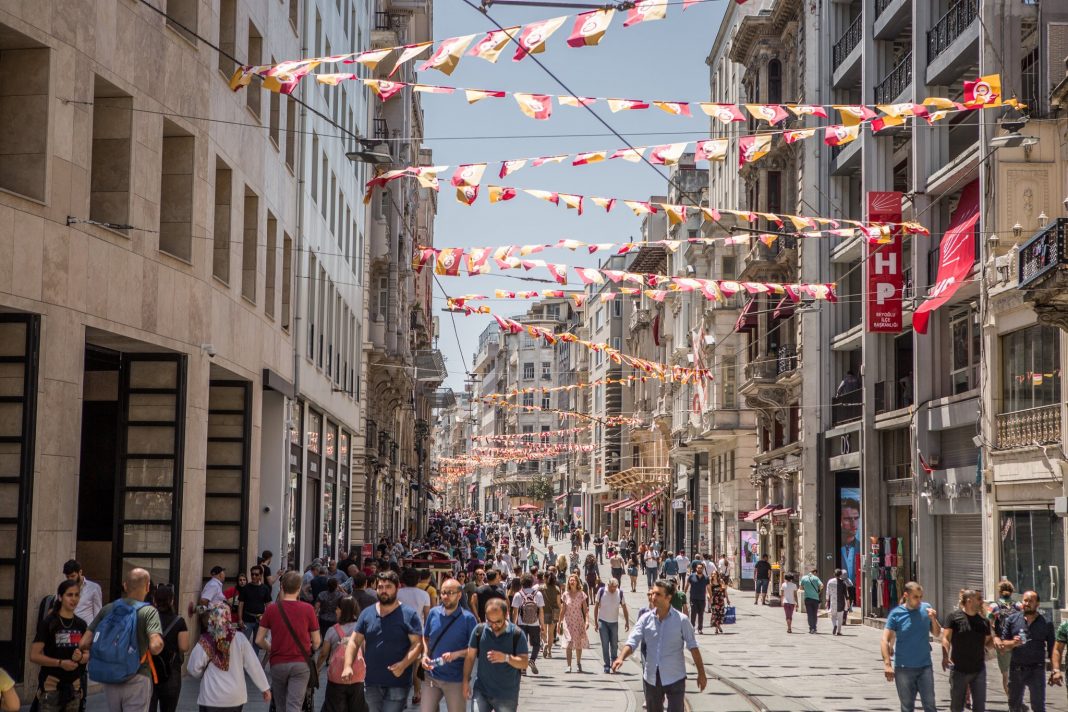 Turkey, long a geopolitical flashpoint, showed on Friday that it was also a risk to the world economy.

A plunge in the country’s currency — further accelerated by a hostile tweet from President Trump — caused financial markets in Asia and Europe to tremble, hastened a broad flight of money from emerging markets and piled on more instability for a region that already has plenty of it.

Internal political turmoil, soaring inflation and a burgeoning conflict with Mr. Trump over a jailed American pastor combined to destroy confidence in the Turkish lira, which lost 20 percent of its value against the dollar at one point on Friday, dropping it to a record low.

Turkey’s economy is only the 17th largest in the world — it is smaller than that of Florida, and about the size of a small European country like the Netherlands. But its problems are worsening as Mr. Trump’s trade war is rattling global commerce, damaging longtime alliances and threatening economic growth worldwide.

There is also widespread fear among foreign investors that the populist, authoritarian government of President Recep Tayyip Erdogan is pursuing irresponsible economic policies while undercutting the independence of the central bank. That, analysts fear, is preventing the country from taking the necessary steps to put the economy on a more stable footing.

Mr. Trump aggravated an already dire situation in Turkey when he said that he would double tariffs on imported Turkish steel to 50 percent and on aluminum to 20 percent. The move seemed to be in retaliation for Turkey’s refusal to release an American pastor, Andrew Brunson, who was swept up in a crackdown after a failed coup attempt in 2016.

The move effectively priced Turkish steel out of the American market, which accounting for 13 percent of Turkey’s steel exports.

“Our relations with Turkey are not good at this time!” Mr. Trump wrote.

I have just authorized a doubling of Tariffs on Steel and Aluminum with respect to Turkey as their currency, the Turkish Lira, slides rapidly downward against our very strong Dollar! Aluminum will now be 20% and Steel 50%. Our relations with Turkey are not good at this time!

Mr. Trump’s hostility toward a NATO ally that borders Iran and Syria increased the risk that Turkey’s problems could destabilize economies well beyond the region.

The plunge in the lira raised doubts about Asian and European banks that have invested in the country, and it contributed to declines in stock markets around the world. As with the financial crisis set off by Greece in 2010, Friday’s events were the latest example of how troubles in a nation with a midsize economy but world-class problems could threaten financial stability further afield.

“In financial markets everything is interlinked,” said Bart Hordijk, a market analyst in Amsterdam at Monex Europe, a foreign exchange firm. “You don’t know if one bank has huge exposure to the Turkish lira.”

On Friday, a dollar bought more than 6.8 lira, easily a record. Over all, the currency has lost more than 30 percent of its value against the dollar just this week. The yield on Turkish 10-year bonds has risen sharply, to more than 20 percent, meaning traders are demanding much higher returns for what they see as an increasingly risky investment.

The sharp decline of the lira, and worries over the wider consequences of Turkey’s economic turmoil, helped drive the main stock indexes in Tokyo, Frankfurt and Paris more than 1 percent lower.

Banks with large Turkish holdings were among the biggest losers. Shares of UniCredit of Italy and BBVA of Spain both fell more than 5 percent in afternoon trading, while shares of the French bank BNP Paribas fell 4 percent. All have large stakes in Turkish lenders.

Mr. Erdogan did not reassure investors on Friday when he continued to blame foreigners for the country’s problems. His combative comments on national television were seen as a signal that he is not likely to change the policies that have undercut the lira’s value, pushed inflation close to 16 percent and made bank loans prohibitively expensive.

Mr. Erdogan urged Turks to combat the lira’s slide by selling any dollars they have stashed away — advice few Turks are likely to take since hard currency is their best insurance against soaring prices.

As a result, Turkey risks becoming caught in a vicious circle.

With its currency weakening, Turkey must pay more for imported oil and other goods. That leads to higher inflation, causing the lira to fall even more. Without steep increases in central bank interest rates and cuts in government spending — moves that Mr. Erdogan has so far refused — the country could suffer hyperinflation and economic collapse.

Turkey also provides a particularly vivid example of how investors are pulling money from emerging markets. Investors can earn safer returns in the United States because the Federal Reserve has been raising interest rates. At the same time, protectionism is making the rest of the world look much riskier.

Beyond its domestic economic issues, Turkey’s diplomatic ties with the United States have worsened considerably.

Washington has imposed sanctions on two ministers in Mr. Erdogan’s government as punishment for the detention of Mr. Brunson, the American pastor, and Ankara has retaliated. Representatives of Turkey and the United States met in Washington this week but failed to resolve the conflict.

“The associated diplomatic row continues to hurt the country’s assets,” Jim Reid and Jeff Cal, analysts at Deutsche Bank, said in a note to investors on Friday. “Countries that are in a diplomatic battle with the U.S. at the moment (e.g. China, Turkey and Russia),” they wrote, appear “to be suffering in the markets.”

But Turkey’s problems go much deeper than its relations with the United States.

Mr. Erdogan called snap elections this year, driven in part by signs that the economy was faltering. The lira plunged even in the midst of his re-election campaign.

The currency’s sharp decline has reflected concerns about the fundamentals of Mr. Erdogan’s economic model, which has depended on a voracious construction industry that his opponents say has enriched his inner circle while heaping debt on the country.

Since Mr. Erdogan acquired sweeping executive powers with his re-election in June, the lira has fallen further, amid concerns that the strong-willed president is taking no one’s economic advice but his own. In an example of his increased role, he has resisted calls for a rise in interest rates to curb inflation and to ease pressure on the lira.

As was the case when Greece helped cause a financial crisis, the reaction in the markets was disproportionate to Turkey’s importance to the world economy.

Investors fear that banks in Asia and Europe could suffer because they have invested in Turkish assets like stocks, bonds or the currency itself. Problems at banks could then spread to other sectors of the economy.

Mr. Erdogan has, however, dismissed such concerns. In a speech on Thursday, he insisted that Turkey would weather the current storm.

“Don’t forget, if they have the dollar, we have our people, our Allah,” Mr. Erdogan told a crowd of supporters in Guneysu, a town in the northern province of Rize, where his parents are from. “We have worked hard, and we are working hard.”

“Where were we 16 years ago,” he said, referring to his first election triumph, “and now where are we?”

His speech was quickly lampooned on social media, however. “When the landlord asks for the rent, is it possible to pay just by saying, ‘You have your apartment, but we have our Allah?’ ” Iskender Baydar wrote on Twitter.