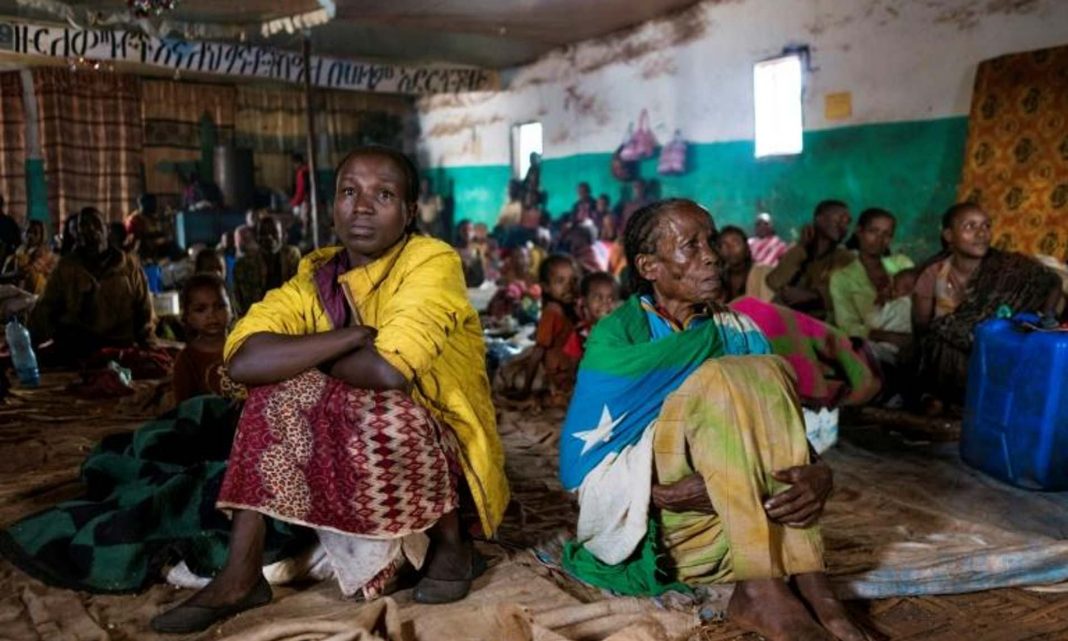 But just weeks later, Bedaso and hundreds of thousands of others of the Gedeo ethnic minority were on the run, fleeing those same neighbours from the Oromo ethnicity.

“I saw houses being burnt and people throwing stones,” said Bedaso. He abandoned an Easter meal of goat meat and fresh coffee and fled to a squalid camp in the town of Kercha, about 480 kilometres (300 miles) south of the capital Addis Ababa.

Nearly a million people were driven from their homes in the weeks of violence between the Oromos and Gedeos that followed Abiy’s inauguration.

“The speed and magnitude of the change happening in Ethiopia equates to a revolution,” said Ethiopian political analyst Hallelujah Lulie.

“Whenever people think that there is a vacuum of power, they try to capitalise on that to pursue their interests. I think the violence comes from that.”

Ethiopia is divided into nine ethnic federal regions, but recently the borders between these regions have been the scene of multiple deadly confrontations.

Last year, long-running tensions between Oromos and neighbouring Somali people over the ownership of farming land in southeast Ethiopia erupted into violence that killed hundreds and forced over a million to flee.

Similar tensions have existed between the Oromos — Ethiopia’s largest ethnicity whose region Oromia is the country’s biggest — and the Gedeos who make up part of the ethnically diverse Southern Nations, Nationalities, and Peoples’ Region (SNNPR).

Many Gedeos farm coffee on the Oromia side of the border in towns such as Kercha, but complain that Oromo authorities discriminate against them.

A letter of complaint from the Gedeo community to a regional administrator earlier this year was misinterpreted as a bid to claim Oromo land, said Zinabu Wolde, head of the agricultural bureau in the Gedeo Zone of SNNPR.

Land is always a flashpoint, he said.

“Land has its own value, great value” and when disputes arise “it brings conflict,” he added.

– Running for their lives –

The violence began soon after.

“This is not your region, this is not your country, you should leave,” Shiferaw Gedecho, a Gedeo who farmed coffee around Kercha, recalled being told by men with rocks and machetes who attacked his neighbourhood.

“We have no problem with the Gedeos, but they came and attacked us and they killed our sons and daughters,” said Lucho Bedacho, an Oromo who fled to a displacement camp after her 21-year-old nephew was killed on his way home from school.

The International Organization for Migration reports approximately 820,000 people have been uprooted in Gedeo and 150,000 in the West Guji zone of Oromia.

The government has given no death toll but Gedeos told AFP of dozens killed.

Two district administrators accused of inciting the violence have been removed from office and are being prosecuted, Zinabu said.

Meanwhile, aid workers warn of dire conditions and a shortage of shelter with the dispossessed seeking refuge from Ethiopia’s seasonal rains in half-built structures filled with smoke from open fires lit for warmth.

Abiy, himself an Oromo, took office after more than two years of anti-government unrest and has moved to placate protesters.

In his four months in office, he has won over many Ethiopians by touring the country preaching unity and criticising heavy-handed tactics used by politicians and the security forces.

But despite the rhetoric, communal violence has flared nationwide.

A western diplomat in the capital Addis Ababa said Abiy’s apparent liberalism may have been interpreted as weakness and emboldened some to use violence to settle local scores.

“My sense is he has inadvertently exacerbated the situation,” the diplomat said.

While the fighting between the Gedeos and Oromos is the most serious crisis, recent weeks have seen bloody ethnic clashes in the western city of Assosa and the Somali regional capital Jijiga.

Gedeos and Oromos lived side-by-side for years. Many say they are willing to do so again, but only if there is accountability.

“The people who committed these crimes are still out there,” said Zeleke Gedo, 32, a displaced Gedeo farmer. “Unless they’re brought to justice, I won’t feel safe.”