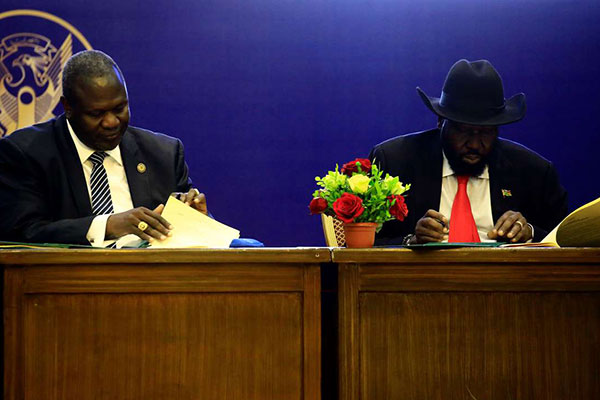 That is the question most observers are asking, as the key partners appear to have been forced by regional and international leaders to sign the deal on August 5 in Khartoum.

First, President Salva Kiir refused to shake Riek Machar’s hand after they signed the agreement. This seemed to send the message that President Kiir was unhappy. SEE VIDEO HERE

Yet, as part of the agreement, the president issued a presidential decree pardoning Dr Machar, paving the way for the rebel leader to return to Juba.

But Dr Machar’s Sudanese People’s Liberation Movement — In Opposition (SPLM-IO) has rejected the amnesty, instead asking the president to apologise to the people of South Sudan for plunging the country into chaos.

President Kiir had earlier opposed Dr Machar’s participation in the transitional government but was pressured by the Inter-Governmental Authority on Development (Igad) at a meeting in Entebbe with Presidents Yoweri Museveni and Omar al-Bashir on July 8.

“Even if we are expelled today and they are brought to power, for how long will they stay in power before you overthrow them?” President Kiir posed.

One of the first things the president is supposed to do is reinstate Dr Machar, who will stay in Khartoum until the mediators set the implementation timetable.

James Oryema, SPLM-IO representative in Kenya, said that while President al-Bashir has a lot of leverage on President Kiir, there is scepticism and concern that the Juba leadership is not reconciliatory.

However, the Khartoum talks, which are still going on until August 19, have made major strides compared with previous efforts to stop the five-year civil war.

In the next eight months, during the pre-trial period, the two parties must form a Cabinet of 35 members, appoint new members of parliament, constitute the National Boundary Committee and integrate the armed groups into a single national army.

Negotiations will continue in Khartoum in the next two weeks to deal with the “bracketed” areas, such as who to appoint to the National Pre — Transitional Committee between President Kiir and Igad; the composition of the National Boundary Committee and its leadership.

Others are establishing a hybrid court to try those who have committed crimes against humanity and war crimes.