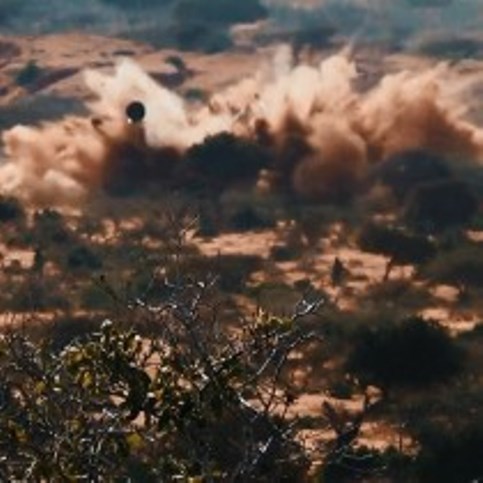 According to a number of sources and eyewitnesses, AMISOM and Somalia National Army mechanized contingents came under 4 separate attacks in 4 difference, but adjacent, areas in the Lower Shabelle region of the Southwest Federal State of Somalia on Friday.

The first of the convoys lost a water truck and some, unspecified damages to a few of the other trucks near Mauri village, shortly after they left Afgoye, 30kms west of the capital Mogadishu.

The truck, it was reported, was destroyed by a planted mine.

The second was not that far from Mauri, either. It happened at No. 60 (km) around 15-20 kms further south of where the first blast happened. No details emerged of this attack.

The third was still a bit further west in between No. 60 and Shalanbood at a place called El Wareegow. Nothing much had been said by either the Somalia army/AMISOM or Al Shabaab about this. No traces of destroyed vehicles had been left behind as this aimed at inflicting a blow on the troops rather than on their trucks, according to people who drove past the area soon after. The fourth and the final attack happened near Shalanbod, outside the regional capital, Merka. A four-wheel pickup ‘technical’, Al Shabaab claimed, was destroyed in this clash.

All four incidents happened on a stretch of road less than 70 kilometres in between the towns of Afgoi and Merka. Three of the four attacks were carried out on broad daylight.

Another mechanized detail of the AMISOM forces were stopped dead at Golaley village in between Mogadishu and Jawhar on Friday, too. Reports from the area confirmed that a perosnnel carrier was heavily damaged by a roadside mine. Human cost, as in the Lower Shabelle clashes, was not revealed.

Road mines, shoulder-fired RPGs and other types of ambushes seem to be climbing  the graph these past few weeks. And they all appear to be concentrated in Middle and Lower Shabelle areas on both sides of – but not far from – the capital seat of the internationaly-propped up Federal Government of Somalia.