SomTribune
Home Somaliland No Public Accountability In Somalia Despite Promises 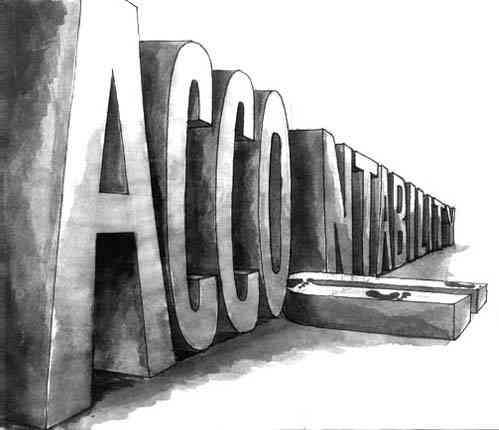 MARQAATI – An anti-corruption Somalia organization in its 2018 on Somalia government accountability to the public says: ” With a lot of promises made, little has been done to improve accountability since our last report”.

The election of Mohamed Abdullahi Farmaajo on 8 February 2017 was exciting as Farmaajo
seemed to be the friendliest candidate for accountability. However, the President took little
interest in governing and ceded much authority to his Prime Minister. The PM, as a veteran in the corruption campaign of the former president, put anti-corruption in the backburner.

By rhetoric, accountability became the centrepiece of his talking points. However, he extensively used bribery to buy political opponents with funds raised by syphoning off of Banadir Regional Administration funds and bags of money originating from a Gulf country.
When bribery and co-optation did not work against all critics, outright repression and silencing became the tools of choice. Mogadishu was on the brink of collapse multiple times in 2017 and 2018 due to the policies adopted by the PM with the support of the President.

While the PM was busy repressing Mogadishu, the President focused on undermining the federal system after the regional governments failed to fall in line with the government on the Qatar-Gulf crisis. This culminated in the removal of one regional president and no-confidence motions prepared in the other regions. The moves seem to have had the opposite effect, and the federal government is less influential today with the regions than it was when the power play started.

On institution-building, the federal government has done nothing to build the constitutionally-mandated organs of government that are essential to the formation of the Somali state. These include the Constitutional Court, which could have arbitrated between the federal and regional governments; the anti-corruption commission, which could have seized stolen property; and the Judicial Service Commission, which must exist in order to reform the judiciary.

All three arms of government are currently firmly under control of Villa Somalia.
The executive is further attempting to cement its authority through the constitutional review, which should produce more power to the centre and less for the regions for it to reach their expectation. If that happens, it will only cause more gridlock and further destabilise the Somalia state formation process.

President Farmaajo is not known to have personally benefited from financial misappropriation.

However, all his major anticorruption promises have been unfulfilled. He still has an opportunity to leave a shining legacy if he takes the recommended steps towards accountability.

Marqaati is an anti-corruption local NGO based in Mogadishu that advocates for government transparency in Somalia’s federal and local governments. @marqaatiSomalia