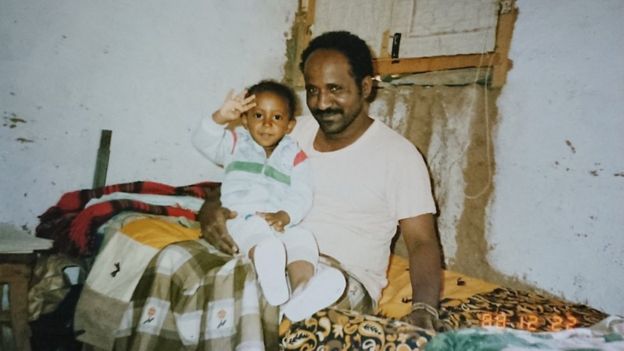 Ibrahim Sherifo, 30, has not seen or heard from his parents since he was 13 years old when they were “disappeared” in Eritrea.

“The memory still haunts me – that black Tuesday in September 2001 – that day changed my life forever,” he told the BBC Tigrinya service.

“I woke up before the crack of dawn to the sound of pounding boots and shouted commands,” he remembers. 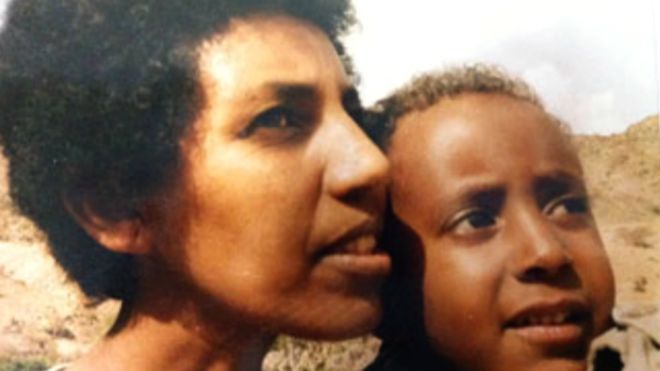 His parents had separated, and he and his siblings were staying at their grandparents’ home with their mother in the capital, Asmara.

“Running out in the yard, I was just in time to see my mother being dragged from the house by soldiers.”

‘Enemies of the government’

Both his mother, Aster Fissehatsion, and his father, Mahmoud Ahmed Sherifo, were then prominent politicians and members of Eritrea’s now defunct parliament.

“Terrified, I ran like the wind to alert my father, who was living several blocks away from us at the time, to alert him of what was happening to mum.

“I did not know that he too had been picked up by security agents a quarter of an hour earlier.”

Since that day neither he, nor anyone else, has seen or heard from his parents.

The government accuses them of treason, but they have never appeared before a court of law – and have been held incommunicado for 17 years.

They were arrested, along with 11 others, for criticising President Isaias Afwerki, who has run a one-party state since Eritrea won independence from Ethiopia in 1993.

Their fate was sealed when their group, known as the G-15, wrote an open letter to the president calling for democratic reforms – and the implementation of a constitution approved by parliament.

At the time, his father was de facto deputy president of the country – and had been one of the top leaders of the EPLF rebel movement during the fight for independence.

Eritrea – a history of struggle:

Read more: Behind the smiles of Eritrea’s president

Has Eritrea’s migration problem been exaggerated?

After the arrest, the salaries of his parents were stopped and he and his siblings had to rely on the support of relatives.

Even as a 13-year-old, Mr Ibrahim says he was aware of the political situation, although his mother and father never discussed such sensitive issues at home in order to shield the children.

“Before the independent newspapers were closed, I was reading about what my parents and what they and their colleagues were calling for, so I knew what was going on.”

Their bravery still impresses him.

“My mother would have known she would be arrested – what still surprises me is that she never showed anything to suggest that.

“The last time we were together was on the eve of her arrest – we came back to my grandparents’ house, ate dinner and she went to bed early. She always liked to go to bed early.

“I stayed up until late to watch some films. I used to love watching films.”

But life was never the same after that.

“When my parents were arrested, their former friends and colleagues who used to visit us suddenly disappeared. We were stigmatised, we were considered enemies of the government and we were only kids.”

Like all Eritreans, Mr Ibrahim went to do military training and national service during his last year of school.

Many young people get trapped in national service for years with little pay because of the years of hostilities with neighbouring Ethiopia. A two-year border war that began in 1998 led to 20 years of enmity between the two states.

Mr Ibrahim joined the thousands who fled the country in search of better opportunities and in 2010 he was granted asylum in the Netherlands, where he still lives.

‘Salt in my wound’

But the recent thawing in relations between Eritrea and Ethiopia gives him hope about reforms at home, but it also leaves him bitter about his parents’ wasted years.

“I even dare to dream of their release.

“I cannot hide the fact that this new peace agreement with Ethiopia has kind of touched my soul – at the same time it feels as if the government is rubbing salt into my wound.”

Mr Ibrahim was born in a battle zone in 1987 – when Eritrean rebels were fighting for independence.

His early memories were dominated by war – aerial bombardments, being herded in and out of bomb shelters, seeing combatants departing to or returning from the frontline.

Most of all he remembers the camaraderie of the freedom fighters during the struggle.

His father and mother joined the Eritrean Liberation Front in 1967 and 1974, respectively, and became leading figures in the campaign against Ethiopian rule.

He remembers that his father spent decades alongside Mr Isaias in the trenches and caves of the Sahel Mountains.

“How can a revolution devour its own?” he asks.

To this day, President Isaias has not implemented the constitution, no election has ever been held and human rights groups say thousands of political prisoners remain incarcerated.

What Eritrea needs more than anything is peace, says Mr Ibrahim, who is now studying tourism management at university.

But he worries that it may be too late for his parents – there have been rumours that his father is dead.

“I have no choice but to keep hope,” he says, adding that his 88-year-old grandmother is now convinced she will see her daughter again soon.

“My dad is so honest, he spoke his mind. He hates division based on religion.

“My mum is smart and loving – I remember her loving and kind spirit.”

After a long pause, he adds: “I still miss them a lot.”

“If they had committed treason, why would they confront the president? This is just an excuse to arrest them. It is 100% false,” he says. 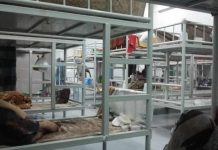