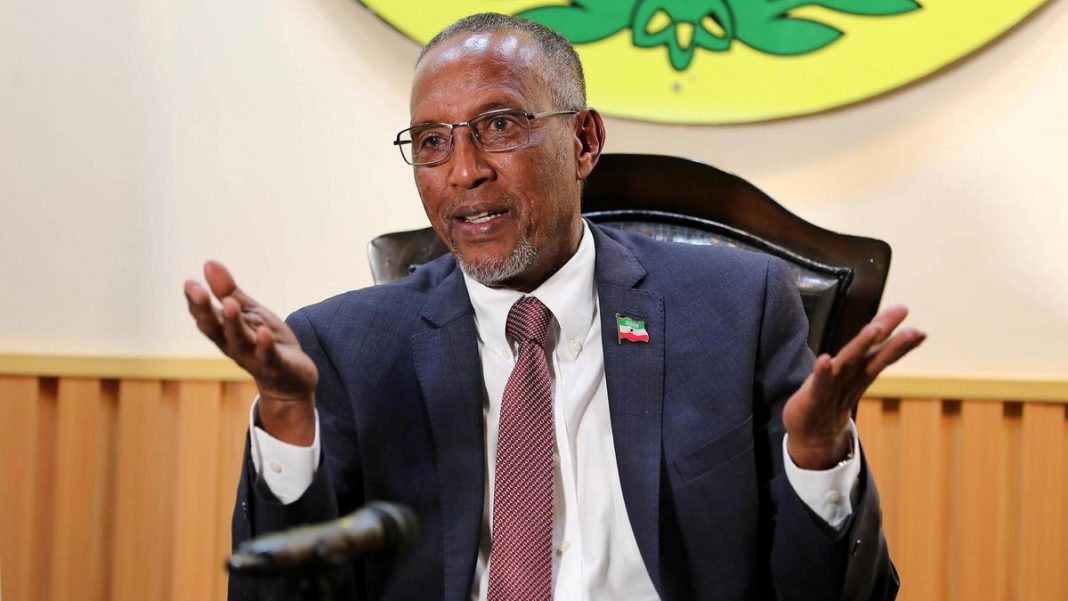 DP World’s $442 million expansion of Berbera port in Somaliland will put the breakaway state on the path to formal independence from Somalia, its president has said.

The Horn of Africa state declared independence in 1991, when Somali president Mohamed Siad Barre fell and Somalia erupted into chaos. But in the intervening years, its campaign for international recognition has fallen on deaf ears.

Today, Somaliland has many of the attributes of a sovereign state, including its own military and police forces, a functioning government and institutions and its own currency, the Somaliland shilling.

Yet Somalia still claims ownership over the territory, although its tangible influence there is minimal. “Somalia cannot interfere in our affairs,” Somaliland President Muse Behi Abdi told The National. “Mogadishu has no control over our country.”

Mr Abdi and his government expect the DP World development — designed to transform Berbera into the Horn of Africa’s most significant port — to bring international recognition as other global investors and governments follow the Dubai-based port operator’s example.

“DP World is a big international company that dared to come to Somaliland, and I hope that a lot of other companies will follow,” he said.

With development, growth and better education, Mr Abdi said, the world will soon take notice. “We should first clean our house. We will continue to build our country in different fields to convince members of the United Nations to recognise and co-operate with us,” he said.

The president acknowledged that peace with Somalia would only emerge with negotiation. “We are sure that one day we will be recognised by Somalia themselves, as Ethiopia did with Eritrea,” he said.

The two sides had been expected to resume talks in March, but with the signing of the Berbera port deal, which bypassed Somalia, negotiations have faltered.

The Somali parliament in Mogadishu, which claims sovereignty over Somaliland, declared the move “null and void” in March, causing its relationship with Hargeisa to sour. Meanwhile, Somali President Mohamed Abdullahi Mohamed argued that only his government can sign such agreements.

“He cannot control us, he cannot come here, he cannot have any impact on the expansion of Berbera port,” said Mr Abdi of his Somali counterpart.

The UAE has strong ties with Somaliland and nearby Puntland — a semi-autonomous Somali state where DP World runs the Bosaso port — but is engaged in a diplomatic dispute with Somalia, whose central government has found itself unable — due to conflict and economic collapse — to provide for its regions.

Overrun by violence and extremism and lacking investment, many Somali states have been sucked into the ongoing Qatar dispute, which began in June 2017 when the UAE, Saudi Arabia, Bahrain and Egypt severed ties with Doha.

The UAE and Turkey — an ally of Qatar — are among the largest investors in Somalia. While the UAE is most active in Puntland and Somaliland — where it also operates a military base — Ankara operates a port and enormous military facility in Mogadishu, throwing into question the central government’s promise to remain neutral in the dispute.

In April, the Somali army seized a UAE plane carrying $9.6m destined for the Puntland Maritime Police Force, trained and financed by the Emirates since 2014. As the UAE began pulling its support in response, Doha donated 30 buses and two cranes to city officials in Mogadishu.

In an exclusive interview with The National in April, Puntland President Abdiwele Mohamed Ali implored the UAE to remain engaged, declaring: “Mogadishu is not Somalia and Somalia is not Mogadishu.”

As Somaliland pushes for official independence, centred around the DP World Berbera port, it appears any hope of a reconciliation with Somalia has been dashed.

Mr Abdi declined to comment on whether the UAE would act as a sponsor for Somaliland’s independence bid, as the United States did for South Sudan in 2011, by lobbying other nations to recognise it.

In recent years the UAE has pursued peace and prosperity in the Horn, which straddles the Red Sea and the Gulf of Aden — vital shipping routes which have come under threat from pirates in the past and more recently Houthi rebels in Yemen.

Abu Dhabi took an active role in helping to broker a peace deal between Ethiopia and Eritrea in July, following two decades of war, and in June pledged Dh11bn in economic aid to Ethiopia, which is undergoing sweeping reforms under dynamic new prime minister Abiy Ahmed.

There was no Somali representation at the official port signing ceremony on Thursday, although representatives from Djibouti, Ethiopia and the EU were present.

“They are not invited, they are not welcome,” Mubarak Ismail Taani, First Secretary of the President of Somaliland, told The National. “It is a crime, according to our laws, for Somalis to come to Somaliland.”