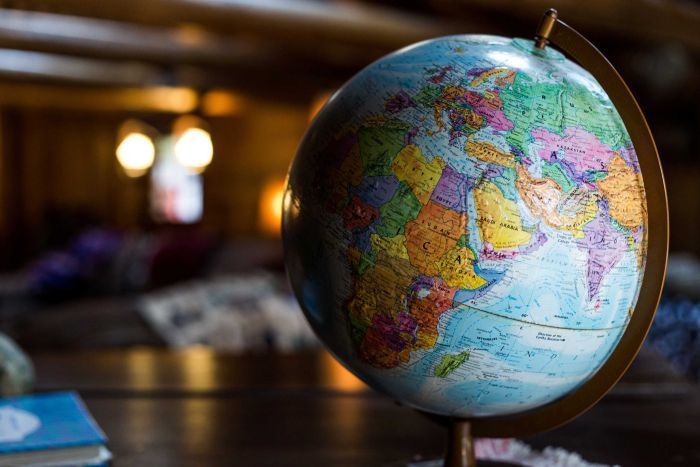 No matter where you are on the Earth’s landmass, you are almost certain to be in a country.

But what makes a country a country?

Agreed legal definitions are surprisingly loose, but an internationally recognised government, citizens, and the exclusive authority over a piece of land are among the universal ingredients

However, these principles of nationhood, refined over the centuries, are being challenged by war, technology, and climate change. Here are four examples of that in action.

One of the key features of nations is their capacity to conduct relations with and be recognised by other countries — but this is not the case for Somaliland.

Journalist Joshua Keating, who explores the changing shape of the nation-state in his new book, Invisible countries , says Somaliland is an example of a new form of nation that exists without recognition.

Somaliland has achieved all the trappings of countryhood but floats within the internationally recognised nation of Somalia, which after years of civil war is sovereign on paper only.

PHOTO: Independence day has been celebrated in Somaliland since its self-formation in 1991. (Getty: Mustafa Saeed)

After declaring itself to be an independent country in 1991, Somaliland now functions as a poor but stable nation with its own currency, public service, and government.

“At the airport, over which flies the Somaliland flag, there is a customs officer in a Somaliland uniform looking at a visa issued by the Somaliland consulate in Washington DC,” Keating says.

“Its capital Hargeisa is one of the safest large cities in Africa, and aside from the pollution and the traffic, there’s not too much to be concerned about when you’re traveling around.”

Its lack of recognition, according to Keating, is partly because the US has traditionally recognised whatever government has de facto control of a country — regardless of the circumstances in which it came to power.

That can make it challenging for would-be secessionists to carve new countries onto the map, no matter how valid their claim to independence.

Estonia is home to an ‘e-residency program’ that offers an example of what citizenship might look like in a post-national world.

PHOTO: Estonia’s digital ID is given to a new class of residents who have no physical ties to the country (ABC News)

“Estonia proposes a different, more open model of nationality on the internet, one not limited to citizens of the physical country it’s connected to,” Keating says.

The program, set up in 2014, gives ‘e-residents’ the ability to register companies in Estonia, file Estonian taxes, and set up accounts with Estonian banks.

Applicants don’t have to live in Estonia to become a resident. They don’t even have to have visited the country.

As of 2017 there were nearly 18,000 ‘e-residents’ from 137 different countries, each with their own digital ID card which functions like a virtual passport.

For many, Estonia is looked on as prescient glimpse of a world in which new communications technologies will render physical borders obsolete.

“I’m not planning on registering a business in Estonia, or setting up a bank account, but this is part of a struggle to define what nationality means on the internet,” Keating says.

The Pacific nation of Kiribati, recognised by the international community since its relatively recent independence from Britain in 1982, has full sovereignty over its tiny islands, which cover an area the size of India.

But it’s facing a dilemma that no nation-state has ever had to face before: its territory is disappearing underwater.

Tarawa, the atoll where nearly half the country’s population lives, could soon disappear.

Rising sea levels have already forced some residents to abandon their homes.

“Kirabati is at the forefront of the next major wave reshaping the map of the world, challenging physical as well as political boundaries and eliminating rather than birthing countries,” Keating says.

PHOTO: The people of Kiribati are under pressure to relocate due to sea level rise as the nation’s landmass disappears underwater. (Getty Images: Jonas Gratzer)

Kiribati is pressuring major countries for assistance, and working to develop first-line defences against the effects of sea level rise by planting mangroves.

Engineers from the UAE, home to the world’s biggest man-made island, have been enlisted for technical advice.

As a potential last resort, Kiribati has also purchased 20 square kilometres on the Fijian island of Vanua Levu for a little less than $9 million.

“If worst came to worst this would become the new home for the nation’s inhabitants, more than 100,000 people who call Kiribati, and its chain of isles and atolls, their home,” Keating says.

The creation of a new state has conventionally meant the legal transfer of sovereignty over a territory from one authority to another.

But the Mohawk Nation at Akwesasne, a First Nations community which straddles the US-Canada border, is challenging the idea that only a nation can have sovereignty.

Although divided by an international border, its residents consider themselves to be one community, and slowly both the US and Canada have come to accept this.

Mohawk have insisted on their right to cross borders freely and have refused citizenship in any recognised country.

In 2017 the Mohawk Council established the first indigenous legal system in Canada. It operates outside the country’s deferral system.

“The existence of modern Indian nations, and their separate legal systems, is a challenge to the legibility of both citizenship and territory,” Keating says.

“It’s not quite part of either country, but not independent either.

“It challenges the notion that only a nation can have sovereignty.